Researchers spoke face-to-face with 1,200 Palestinians in the West Bank and Gaza and held telephone conversations with 900 Israelis, including settlers and Israeli-Arab citizens.

A Palestinian man smokes a cigarette beside Israeli soldiers after minor clashes with Palestinian stone-throwers in the West Bank city of Hebron February 23, 2010
(photo credit: REUTERS/AMMAR AWAD)
Advertisement
Israelis and Palestinians by a small margin still support a two-state solution but most do not think it can happen in the next five years, according to an opinion poll published on Tuesday.Some 53% of Israelis and 52% of Palestinians support a two-state solution.That is a drop from the 71% of Israelis and 57% of the Palestinians who supported the idea in 2010.A larger number, 71% of Palestinians and 72% of Israelis, think a Palestinian state will not be created in the next five years.The lead researchers in the study, Dr. Dahlia Scheindlin and Dr. Khalil Shikaki, told reporters at the American Colony Hotel in Jerusalem that surface results of their report, “Palestinian-Israeli Pulse: A Joint Poll,” could be viewed as discouraging.But Israeli and Palestinian leadership can reverse the downward trend with regard to the peace process, they said.

Joint poll measures preferences for conflict resolution among Palestinians.“We show why [support for the peace process] is declining and going in the wrong way. We are saying there is another reality. Dig deeper, you can find things,” said Shikaki.In the late 1990s and into the mid-2000s, public support for a two-state solution was much higher, Scheindlin noted, giving former Israeli prime ministers Ariel Sharon and Ehud Barak the rationale they needed to move forward with a two-state solution.“It is easy for policy makers to look at [the study’s results] and say, we can coast because the public isn’t demanding that we move ahead on this. But if they were to show political leadership, if they had vision, they could get the public to support them,” Scheindlin said.Shikaki explained that participants in the poll were asked to look at a package of nine elements related to the peace process. Those included such issues as refugees, borders, security and Jerusalem. They then presented respondents with a package of incentives to help assuage doubts over some of the concessions that would need to be made to resolve those issues and lead to a peace agreement. 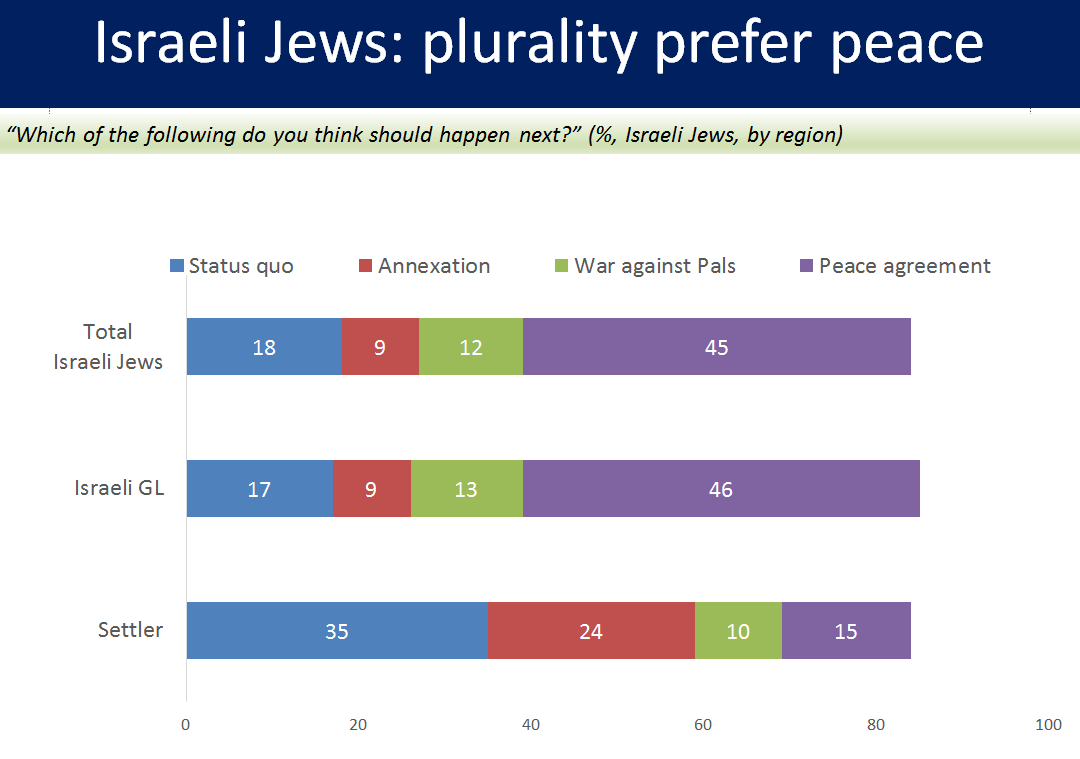 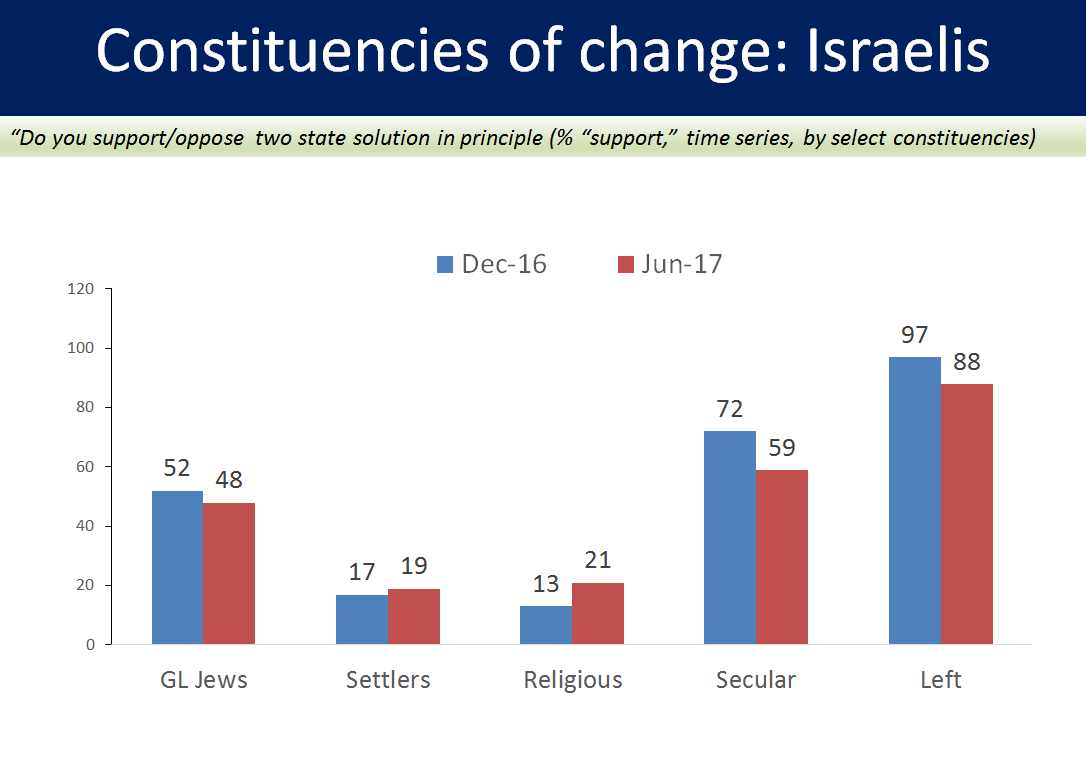 Joint poll measures support for two-state solution among Jewish constituencies.
A more detailed look at the data showed that Israeli-Arabs were the most optimistic about the two-state solution, with 81% supporting it compared to 47% of Israeli Jews.

Joint poll measures support for alternatives to two-state solution.
A more detailed look at the data showed that Israeli-Arabs were the most optimistic about the two-state solution, with 81% supporting such an arrangement, compared to 47% of Israeli Jews.An additional 15% of the Israeli Jews in that part of the survey said they preferred a solution that involved expelling Palestinians. Another 15% said they supported an apartheid solution, the report said. Some 17% of Israeli Arabs, 12% of Israeli Jews and 11% of the Palestinians said they supported a one-state solution.Some 52% of Israelis and 44% of Palestinians targeted settlement expansion as the reason that they did not think a two-state solution was viable.The report on the findings was published by the Tami Steinmetz Center for Peace Research at Tel Aviv University and the Palestinian Center for Policy and Survey Research in Ramallah.The work was funded by the European Union and the Netherlands.The poll was conducted face-to-face with 1,200 Palestinians in the West Bank and Gaza and by telephone with 900 Israelis, including settlers and Israeli-Arab citizens. The margin of error on the poll is +/-3%, according to the researchers.