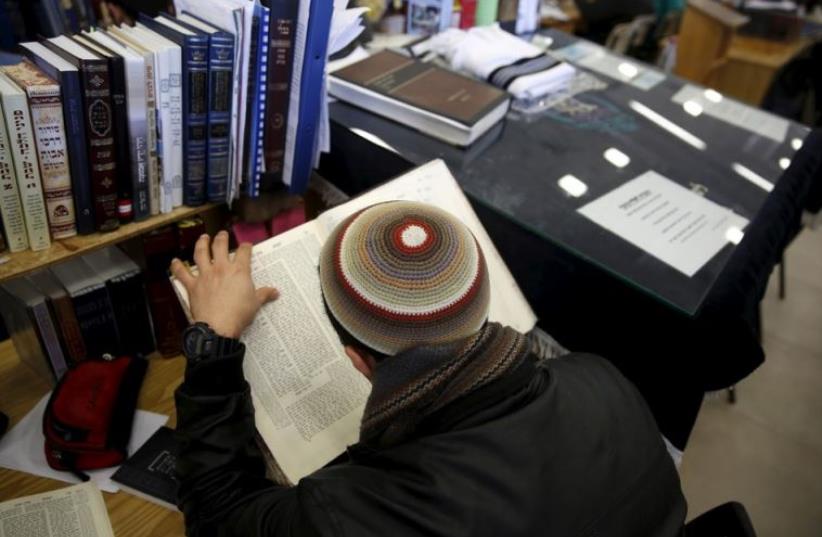 A student reads during a lesson at the Bnei David academy in the West Bank Jewish settlement of Eli
(photo credit: REUTERS)
Advertisement
The Defense Ministry has formally warned the Bnei David yeshiva in Eli that if its dean, Rabbi Yigal Levinstein, does not step down, Bnei David will lose its status as a hesder yeshiva.Additionally, the ministry threatened to revoke a special privilege for the Bnei David pre-military academy allowing all of its students to obtain lengthy military service deferrals, as compared to other academies where only 10% of students can receive such deferrals.The warnings were issued by Defense Ministry director-general Maj.-Gen (res.) Udi Adam, in a letter to Rabbi Eli Sadan, Levinstein’s co-dean of the Bnei David institutions, following an earlier written demand by Defense Minister Avigdor Liberman to Levinstein himself to stand down.On March 7, Levinstein gave a speech in which he disparaged female soldiers and denounced the enlistment of religious women to the IDF, which led to the demands for the rabbi’s resignation.In a speech last year, Levinstein denounced homosexuals as ”perverts” and was fiercely critical of pluralist aspects of the IDF’s educational programs.Adam said in his letter that Levinstein’s various comments had done “severe injury to the IDF, and the different groups who serve in it, IDF values and the State of Israel,” and that the defense minister and the defense establishment could not allow such sentiments to be delivered to pre-military academy and hesder yeshiva students.“The severe diatribe of Rabbi Levinstein to the staff of the hesder yeshiva raises the concern that the students of the yeshiva, who are IDF soldiers in combined service, are exposed to opinions that besmirch the purpose of studies in hesder yeshivas and their educational programs, which are supposed to educate for full, values-based service in the IDF and for respecting the IDF command and all of those who serve in it,” Adam wrote in his letter to Sadan.Adam wrote that before the decisions to revoke Bnei David’s hesder status is taken, Levinstein was invited to a hearing in the Defense Ministry on March 30 to give his position on the matter.Senior national-religious rabbis have for several years waged a campaign against religious women enlisting to the IDF, insisting instead that the serve in the national-service program, due to concerns that the army is an unfit setting for religious women, claiming that they are likely to decline in religious observance during their military service.Despite this campaign, the numbers of religious women enlisting has increased dramatically in recent years, with 2,159 women from the sector joining the IDF in 2015, approximately 25% of the roughly 7,000 religious-Zionist women who graduate from 12th grade every year.Another issue which has troubled leaders of the national-religious sector is a directive issued by the IDF six months ago encouraging the formation of mixed gender units and requiring all officers and NCOs to serve in a mixed-gender battalion if so ordered.National-religious rabbis oppose situations in which religious men would be required to share living or sleeping quarters with women, due to religious laws prohibiting such proximity with women other than a man’s wife and family.Several leading rabbis from the sector, including Sadan as well as Rabbi Haim Druckman and heads of the Associations of Hesder Yeshivas and Pre-military academies, held a meeting with IDF Chief of Staff Lt.-Gen. Gadi Eisenkot on Wednesday afternoon to discuss the issue.The Jerusalem Post understands that Eisenkot was to present draft proposals to soften the directive and give officers the option of not serving in mixed-gender units.