'Rabin was a Nazi' spray-painted under anti-Netanyahu protester's home

A large cloth sign saying "the lockdown is political" can be see hanging from the activist's window, as crowds rally against the cabinet's protest restrictions. 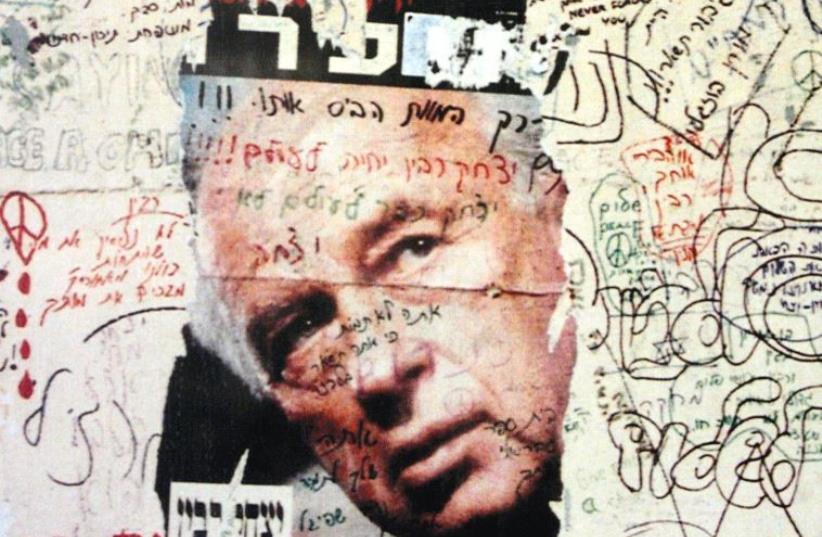 A POSTER of late prime minister Yitzhak Rabin on a wall near his memorial in Tel Aviv.
(photo credit: REUTERS)
Advertisement
Graffiti saying "Rabin was a Nazi" and a swastika were spray-painted on the wall of an anti-government activist's apartment building, News 13 investigative journalist Omri Maniv wrote on Twitter.
Video footage from a protest against Prime Minister Benjamin Netanyahu that took place Wednesday night shows the swastika on the wall under the apartment of a Kumi Israel (Get up, Israel) activist.

A large cloth sign saying "the lockdown is political" can be see hanging from the activist's window, as crowds rally against the cabinet's protest restrictions passed by the Knesset early Tuesday morning.
This is "the most chilling video you will see this evening," Geneva Initiative Two-State Coalition director Yariv Oppenheimer said on Twitter, showing footage of the painting.
"Swastikas in Tel Aviv!" Peace Now wrote Thursday afternoon on Facebook. "This is the result of the raging incitement against anyone who dares to protest against the government."
The "disgraceful writing in the image was painted last night in the entrance to the apartment of dedicated young people who have been warning us for months that our indifferent cabinet is crushing Israeli democracy," the NGO added.
"25 years after the murder of [former prime minister] Yitzhak Rabin, this is the writing on the wall," Peace Now said. "A worrying reminder that the incitement Netanyahu leads and endorses works and manages to reach every corner."
Parts of Israel's Left have blamed Netanyahu's militant resistance to the Oslo II Accords in 1995, alongside his participation in large far-right protests for the subsequent assassination of Rabin by Yigal Amir in the end of a pro-Peace rally.
"Now, as always, we are standing by the side of those facing violence for carrying out their civil rights," Peace Now wrote.
"The terror tactics of the inciter and the incited will not stop the protests. We will continue protesting until the government starts to work for the public and not against it."
A similar writing, spray-painted in a similar way to the one under the activist's apartment, appeared in Tel Aviv last week, according to N12. No suspects have been arrested for painting the writings, as of Friday night.
Early Wednesday morning, the Knesset voted 46 to 38 to limit demonstrations against Netanyahu to 20 participants. According to the new regulations, protests are only allowed within a one-kilometer (0.6-mile) radius from one's place of residence.
A spontaneous protest took place in Tel Aviv Wednesday night, with four being arrested by law enforcement on suspicion of rioting and attacking police officers. Three detainees were reportedly released from custody overnight.
According to police, the unsanctioned protest led to "grave civil unrest," with four demonstrators being arrested during the march on suspicion of rioting and attacking police officers.
"Three of the four were falsely arrested for causing public unrest: an unfounded violation that was not committed by any of them," said the detainees' solicitor, attorney Daniel Haklai.
"It seems that they exposed the undercover officers [among the crowd], suffering retaliation" from law enforcement personnel.
The fourth detainee, Itay Raviv, was reportedly arrested on suspicion of assaulting Israel Police's Central Tel Aviv precinct deputy-commissioner.
"The charges are unfounded," Haklai said, adding that Raviv is a "glasses-wearing sweetheart who served in [the IDF's elite military intelligence] Unit 8200, works in tech and is light years away from any violence or those using bicycle horns."
Bicycle horns, known in Israel by the informal term "zamboura," are frequently used in anti-government protests. The precinct's deputy-commissioner claims to have been attacked by Raviv with such a horn.
"I did not see any rioting. The protest ended on its own," Alec Yefremov, a participant of the march, told The Jerusalem Post early Thursday morning.
"Everything ended peacefully. Maybe police are referring to an earlier stage when arrests were carried out. But in that regard, they are obviously lying, as usual," he added.
"I participated in the last half-hour [of the march] and it was as calm as a mint soda," another protester said.
"A spontaneous, unorganized demonstration took place this evening in protest of the Israeli government's failure to address the coronavirus crisis and its attempt to turn Israel into a dictatorship," Stav Shomer, another protester, told The Post.
"Even though the bill restricting protests was not passed, Tel Aviv Police declared the march as 'unlawful,' showing unrestrained violence toward the protesters from the very beginning, attempting to suppress our democratic right to protest," Shomer said.