Under the new system, all parties in the battle will see the same image – provided by the goggles of an infantry soldier or a sensor on a fighter jet. 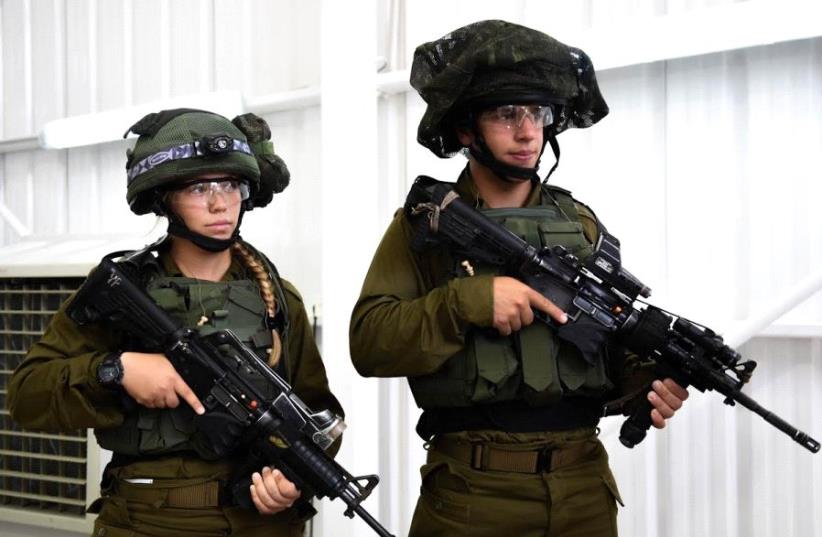 New combat uniforms for IDF infantry soldiers
(photo credit: IDF SPOKESPERSON'S UNIT)
Advertisement
Rafael Advanced Defense Systems has unveiled a technological breakthrough for Israeli ground forces that is aimed at improving the ability to engage enemy targets through artificial intelligence and Automatic Target Recognition (ATR).
The ATR system, a combination of AI and deep learning, was installed last year on Rafael’s SPICE-250 precision-guided smart bombs, enabling them to identify moving targets and differentiate between them and other objects and terrain.
Now, Rafael is offering the ATR for individual soldiers, proposing a new outlook for the IDF that combines various capabilities to create a multidimensional battlefield.
Under the new system, all participating parties in battle will see the same image, provided by the goggles of an infantry soldier or a display on a fighter jet. It will mark and indicate targets and create a common language for all users.
ATR is one of the developing Rafael technologies that will help create this language and mark the targets and allows “smart weapons” to understand what they see through AI – whether it is a person, a wall or a weapon – and then feed the target into the main system.
In recent decades, warfare has become more urban, and combat often takes place among civilians, or “uninvolveds,” as they are often referred to in the IDF, Rafael officials said.
The basic premise in the conceptualization of the contemporary battlefield is that soldiers no longer see battles such as those of the 1973 Yom Kippur War, when divisions of tanks maneuvered in open space and infantry units were sent to conquer hills.
These days, the target is often invisible or difficult to detect. It could be a lone gunman in a window who appears for a split second and then disappears or a terrorist who hides underground and then suddenly appears somewhere else. The enemy has become more sophisticated and efficient and utilizes better technology.
If, until now, the different branches of the military – the air force, navy and ground forces – each used different systems to suit their own purposes, the multidimensional battlefield precept is to advance an integrated system that will combine capabilities, information and autonomous tools for all those involved in the same battle.
From underground, up through the ground and air and into outer space, all the various units must use a unified system that will allow them to work better together, Rafael officials said.
THE NEW system will classify each target and assist lone infantry soldiers in understanding what elements are in the field. When used with SPICE bombs (Smart, Precise Impact, Cost-Effective) during flight, a pilot selects the target to be attacked and allocates a target to each weapon.
The weapons are then launched toward the vicinity of the targets, and as they approach, they use the ATR mode to detect and recognize what it is they are supposed to strike. Each weapon locks on to the predefined target, either autonomously or with a human-in-the-loop, aided by the ATR algorithm.
In addition, Rafael is developing a system that can be installed on drones and ground vehicles that can serve as “eyes on the ground” and carry out ground-based intelligence missions – also for indoor operations.
These devices, using Rafael sensors, can map the inside of a house in real time: They can identify who the people inside are, as well as identify objects within, including classifying what weapons are there.
The device feeds the map for all parties on the battlefield to peruse and can determine which is the right one to engage the threat.
All this adds up to a system that is already being assimilated in the IDF, the Fire Weaver, which serves as the battlefield’s “social network.” It integrates all the information that was collected by the different participants and sends it to all the rest – the commander and ordinary foot soldier, the war room, the chopper in the air and the warship out at sea.
“Now, we can really talk about connecting in real time between the fighter jet, the chopper, the UAV – to the tank, the soldier the AFV [Armored Fighting Vehicle] – in all terrains, at every point of time and doing it in continuity,” Rafael CEO Yoav Har-Even said.
“What enables this [breakthrough] is advanced intelligence collection abilities from manned and unmanned platforms and the ability to put everything in one place, then fusing this information and sending it out to the relevant forces on the ground,” he said.