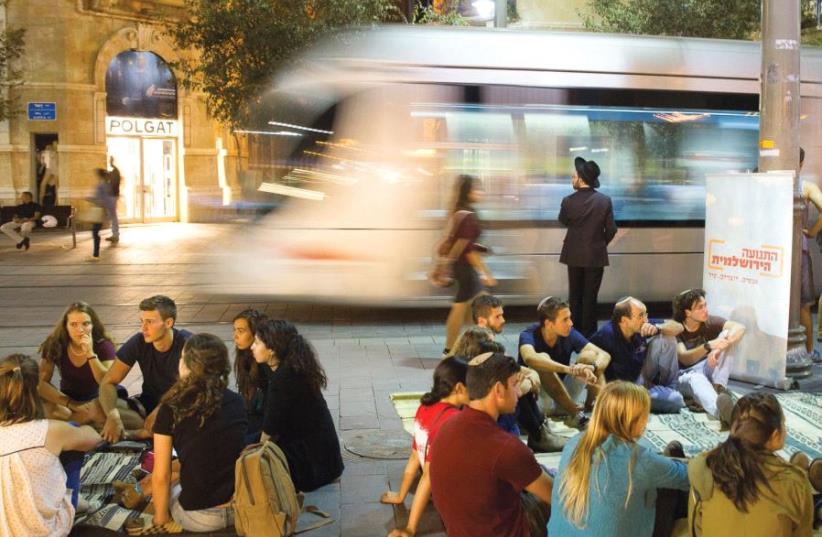 Dialogue circles on a Thursday night at the Meeting Place in Zion Square
(photo credit: NOAM FEINER)
Advertisement
Tisha Be’av, the 9th of Av, commemorates the destruction of the Second Temple in 70 CE, which launched the Jewish people into exile. It also emphasizes a look toward the future building of the third Temple in the Messianic era. This year, Tisha Be’av will mark another kind of destruction and rebuilding – the memorial for 16-year-old Shira Banki, who was killed two summers ago while marching with her friends during Jerusalem Pride.Ahead of this year’s Jerusalem March for Pride and Tolerance on August 3, the Yerushalmit Movement will host the memorial event, along with Shira Banki’s Way, started by Banki’s parents; the Beit Hillel Modern Orthodox organization; and Havruta and Bat Kol, religious LGBTQ organizations. The memorial was born from the Yerushalmit Movement’s Meeting Place project, which sprang up as a grassroots response to Banki’s murder and now holds intersectional dialogue circles every Thursday night in Zion Square.“We decided to have it on the night of Tisha Be’av and to connect the meaning of Tisha Be’av with the murder of Shira,” Sarah Weil, Yerushalmit Movement development director and meeting place coordinator, explains.“We’re saying that Shira Banki’s murder is a modern-day result of baseless hatred. It is a call for us to take a stand against hate speech, first and foremost, and for creating a more tolerant society. We want a society in which we all have the opportunity to meet each other and break down those barriers of fear that keep us from that and instead see each other as categories. This is what we’re doing this year.”The memorial event will begin with a public reading the Book of Lamentations, led by a diverse array of leaders from Israeli society, including representatives from the Orthodox, Conservative and Reform movements.Among them will be Rabbi Aaron Leibowitz, who has been a devotee of the Meeting Place project.Weil points out that in Israeli society, Tisha Be’av is not known widely or even taught in secular schools. It is not part of general Israeli culture but rather a strictly religious memorial day. Lamentations has a universal meaning as well as a historical one. It is this accessible message that the memorial event hopes to harness.The public reading of Lamentations is aimed at creating an event that will be accessible to all, and open to different ways of commemorating the holiday. The various readers will be placed around the crowd, representing their different communities. On the side, there will be a circle gathering for secular Israelis who don’t wish to read the scroll as it is traditionally read, but want to discuss it as a historical document. This creates a new way of commemorating Tisha Be’av and opens it up to a broader audience; something the Yerushalmit Movement feels passionately about.After the public reading of Lamentations, there will be nine dialogue circles for Tisha Be’av with the theme of mahloket, or disagreement. Each one will feature two speakers who are leaders in Israeli society and who will represent two sides of a timely and topical disagreement, along with a facilitator. Speakers – mostly in Hebrew – include such diverse figures as Ehud Banai, Rabbi Benny Lau, Jackie Levy, Hili Troper, Daphni Leef, Tomer Persico, Sarah HaEzni Cohen, Shivi Fruman, Mickey Gitzin (New Israel Fund), Rabbanit Chana Henkin, Hadassa Frumin and Malka Piotrokovsky.The goal, as evidenced by the divergent speaker list, is to take the concept of disagreement as a model for building up society and learning to celebrate differences of opinion as a source of creativity and strength. Disagreement topics will include religion and LGBT (also the theme of this year’s Jerusalem Pride March); neighborhoods being united or divided; freedom of religion in the public sphere as it appears in issues such as prayer at the Western Wall and the Temple Mount; and Shabbat.“What’s innovative about this year is that we’ve decided to take the opportunity to have the main event in Zion Square and then four concurrent events in other Jerusalem neighborhoods, in partnership with the communities themselves,” Weil says.

“The idea is to show that Shira’s murder affected all of us and that it’s a citywide issue. We’re doing this as part of the Yerushalmit Movement’s mission to build a community of communities in Jerusalem, which means strengthening each neighborhood, caring for each community within each neighborhood and building bridges of dialogue between neighborhoods.These events are in line with that mission.” The simultaneous memorial events will take place in Har Homa, Kiryat Menahem, Gilo and French Hill.Weil emphasizes that it was extremely difficult putting the memorial event together because the Yerushalmit Movement is composed of people from every sector who don’t necessarily agree politically or share the same values. In fact, it was so arduous and created such a conflict within the Yerushalmit Movement’s planning team and board that many lengthy meetings were required with a great deal of compromise. However, through the conflict and the encountering of different positions, the memorial event was created. None of Weil’s team is entirely happy with the result, but all of them are satisfied that it fulfills its intended purpose.Thus the event itself, and certainly its planning, is a microcosm of what is happening within Jerusalem society and how it could be handled. The movement embodies the message it so tirelessly works to impart of a shared society – one where people can maintain their own identities and communities while working together for the common good. It was only the conflicts of interest within the Yerushalmit Movement that yielded the incredibly diverse event that will take place on Tisha Be’av.Weil says that they are proud of the fact that nobody is 100% satisfied. From disagreement springs forth a multilayered entity that is strong enough to hold clashing opinions and sparring points of view. The fact that Beit Hillel was willing to be part of the event along with Havruta and Bat Kol is in itself evidence of a huge step toward religious inclusiveness of LGBT people as a whole and of the transformative power of the memorial event.“I think the memorial is very important,” Mendy Chaloum, a Meeting Place volunteer, adds.“It’s not only the story about how Shira was murdered. The moment that I heard she had been stabbed, I thought it was a Muslim because there had been a lot of stabbings of Jews during that time. Then I heard that it was a religious Jew and I was shocked. It took me a bit to process, but I was raised in the haredi society. The haredim were saying that he was not okay, he was mentally sick, but I know because I’ve been in that society that they wouldn’t really call him crazy.“Looking back, it doesn’t surprise me that this happened. Last summer, we marched in Shira’s memory. For me, Tisha Be’av is all about destruction and sacrifices. This is almost the same. A guy came and killed somebody because he didn’t agree with what she represented to him. I’ve had conversations with extreme religious people who have told me that she shouldn’t have been there, she could have been at home. She’s the guilty one for going that day. I was really shocked by those words.”Chaloum, an LGBT ally like Banki, left the haredi world of his family and sees how that environment is ripe to breed hatred and fear of the other. Like other volunteers, he is at the Meeting Place every Thursday night because he believes that intersectional dialogue and opening up possibilities for connection are the only ways to a peaceful Israeli society.For Uria Ben Brit, another volunteer at the Meeting Place and a board member of Havruta, it is the simple moments that have shown him the impact that this kind of activism can have.“One of the most powerful moments I had was when I held the pride flag and someone came up to me and hugged me and then left,” Ben Brit recalls.“He didn’t need to say anything because I felt what he was trying to convey. It made me smile for a long time after. There are a lot of things happening in Zion Square on Thursday nights, but this was a simple moment. I felt he was with me and supported me, and was so grateful that we are there every week. Some people really sup - port what I do here and see me and love me exactly for who I am, even if I’m doing something that is controversial. That stayed with me. Everything there is usually so frantic with conversations, yell - ing, contradicting opinions, but this was without words.”It is in those moments of silence, the in-between, where lasting change is born. That lack of reaction can mean the difference between devastation and life. That extra moment to empathize instead of responding in a knee-jerk fashion is what the Meeting Place embodies and what Banki’s legacy is teaching us all.For more information: www.facebook.com/events/120711661878516 and www.facebook.com/meetingplaceproject/