Remembering those who had no one to remember them

Nechama Rivlin read the names of the relatives of Michal Shorer, a family friend, whose nearest and dearest lost their lives in the Treblinka death camp in 1942. 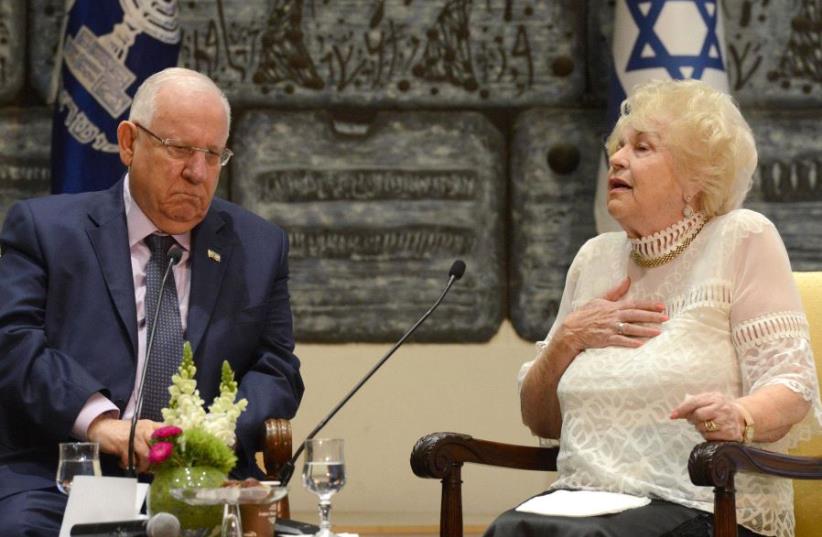 President Reuven Rivlin speaks to Holocaust survivor Miriam Eshel.
(photo credit: MARK NEYMAN / GPO)
Advertisement
After participating in a wreath-laying ceremony at Yad Vashem on Monday morning, President Reuven Rivlin went to the Knesset, where he and his wife Nechama joined other dignitaries, including Prime Minister Benjamin Netanyahu, Knesset Speaker Yuli Edelstein and Jerusalem Mayor Nir Barkat in reading names of people who perished in the Holocaust.Rivlin, as he has done previously, chose to read the names of Holocaust survivors who had come to Israel and had lost their lives in one of Israel’s wars, but had been the last remnants of their families and had no one to mourn them, to recite the Kaddish prayer or to light a candle in their memories.He has long felt an emotional tug for people who been through hell, had managed to hang on to life in the hope of reaching the Promised Land only to die fighting for it without leaving any progeny to carry their name or to pass on their genes to future generations.Among others, Rivlin read the name of Auschwitz survivor Atara Abramson, as well as the names of members of her family who did not survive. He also read the name of Michael Adler, who was liberated from Dachau in 1945 and came to Israel as an illegal immigrant in 1947. Exiled to Cyprus by the British Mandate authorities, he returned in 1948, joined the Israel Defense Forces and was sent to Latrun with the 7th Brigade to open the road to Jerusalem, which was under siege.Strictly speaking, Adler was entitled to be exempted from military service, but he insisted. It was a means of restoring his self-esteem and his dignity as a human being. “Private Michael Adler fell in battle while defending the Burma Road,” said Rivlin. “He was only 20 years old when he fell.”Rivlin also read out the names of Adler’s parents Hava (Hannah) and Yitzhak Adler from Slatina in Czechoslovakia, who had been among the murdered in their city.Nechama Rivlin read the names of the relatives of Michal Shorer, a family friend, whose nearest and dearest lost their lives in the Treblinka death camp in 1942. In a moving tribute to them, to members of the families of her parents and to all the six million Jews whose lives were cut short by the Nazis, Nechama Rivlin said that she was standing at the Knesset as a representative of life, as someone whose soul and body cells represent all of her ancestors going back through all of the generations.In the evening, President Rivlin had a private meeting with former president of Germany Joachim Gauck, after which the two traveled to the western Galilee to the Fighters House Museum at Kibbutz Lochamei HaGetaot, where they participated in the official closing ceremony for Holocaust Remembrance Day.The kibbutz was founded in 1949 by surviving combatants from the Warsaw Ghetto uprising, former partisans and members of other resistance groups to commemorate the fact that contrary to public opinion at the time, not all Jews went like lambs to the slaughter.