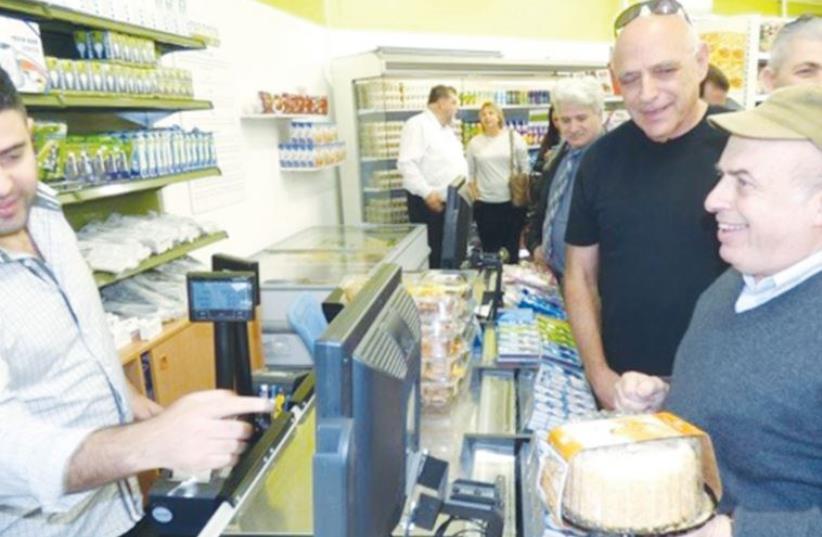 Jewish Agency Chairman Natan Sharansky shops at the Sderot co-op CityMart
(photo credit: DAVID SHECHTER/JEWISH AGENCY)
Advertisement
Driving to the opening of CityMart in Sderot, the first branch of a chain of food co-ops opening across the country, Natan Sharansky could see the irony.“I’m a capitalist going to the opening of a communist initiative!” joked the famed refusenik and Jewish Agency chairman on Monday, in an event potentially momentous for both Sderot and the venture being helmed by the Jewish Agency in partnership with the Israel Venture Network.The CityMart (Tzarchaniyat Ha’lr) launch event in Sderot featured addresses by Sharansky, IVN vice chairman and co-founder of NICE systems Benny Levin and Mayor Alon Davidi.The 200 sq.m. branch marks the first of 40 planned co-ops, with a second branch set to open in Arad in January. This will be followed by the opening of a co-op every six weeks over the next two years.The food co-ops will be located throughout the socioeconomic periphery, offering customers groceries for significantly less than market prices. All earnings will be invested in strengthening the local communities, as well as in further developing the venture. This is the first time such a model is being launched in the country, combining a response to the cost of living and a partnership with local residents.The financing is in the form of a social loan, which the co-ops will gradually pay back as they begin to make a profit.Explaining the Jewish Agency’s vision, Director of the Social Activism Unit Nir Lahav said, “The more you go to the South of the periphery area, the higher the prices are, the less the competition [is]. If you go to Yeroham, there is one supermarket.If you go to Arad – one supermarket. So we want to reduce the cost of living.”In Lahav’s eyes the possibilities the co-ops present go beyond lowering the cost of living. They present an opportunity to change the nature of communities across the country.“It’s not only the prices”, he explained. “We would like to change the concept of doing business.You can make money but do it in a modest way. We don’t have to rip off everyone in order to succeed, so everybody gives a little bit of his share in order to succeed.”The CityMart concept appears from the outside to be in stark contrast to the transition Israel has made in the past 30 years into a capitalist “start-up nation.” Benny Leviev, who made much of his fortune as an early pioneer in Silicon Wadi, argued that the co-op in truth represents the next step in the country’s development as a nation.“Because of the Israeli chutzpah we managed to build the second biggest technology hub after Silicon Valley here. Now what we want to do is build the ‘social’ start-up nation, one that allows social entrepreneurs to build the country [so it] can be proud of its social initiatives.”The community is undoubtedly at the core of the Sderot branch.The building itself contains not only a supermarket but a community center, whose purpose is to serve as a base for future community initiatives, including the building of a playground next to the store and events for children.Addressing the assembled crowd outside the CityMart, Mayor Davidi made clear its opening served as a reflection of the progress the city was making in the aftermath of last year’s Operation Protective Edge, saying “the city is not ‘surviving’ like it used to be – we are growing, and there is positive development.”For the residents that have been at the heart of establishing the co-op, none was happier than Felix Agarunov, a leading local community activist. Describing what made the co-op different to other supermarket chains, Agarunov suggested that “the messages we’re trying to convey are opposite to the big bulldozers of the big chains. In any big supermarket you can see all those promotions, all those offers, all those one plus one offers – we don’t have that. We want the people to buy cheap first, and then just what they need.” The CityMart initiative is helmed by The Jewish Agency, in partnership with the Israel Venture Network (IVN), and with the contributions of the UJA-Federation of New York, as well as the United Jewish Endowment Fund of Greater Washington and private donors.