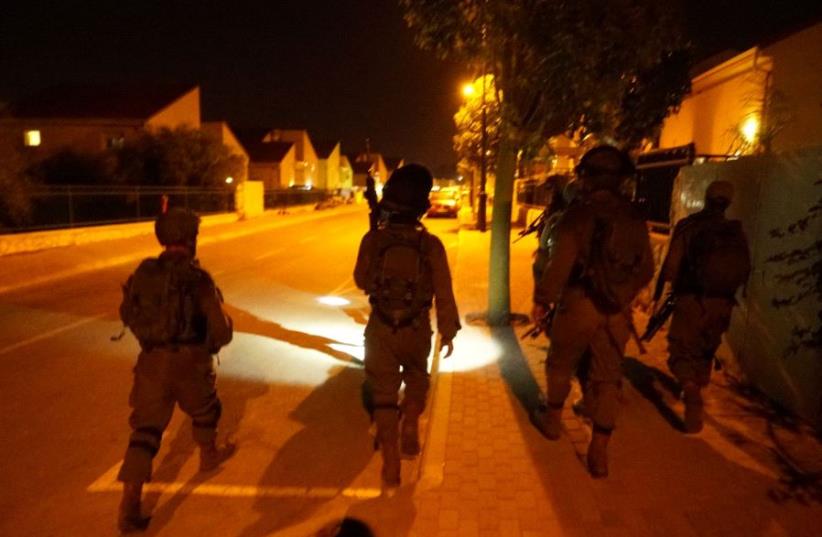 IDF forces in action following deadly attack in Halamish, July 22, 2017.
(photo credit: IDF SPOKESPERSON'S UNIT)
Advertisement
Security forces have arrested a popular Palestinian wedding singer on Thursday for praising the terrorist who killed three members of the Salomon family in Halamish, the IDF said.
IDF forces conduct a raid in Beit Rima
The singer, Muhammad al-Barghouti, from Beit Rima, 27 km. northwest of Ramallah, ran a recording studio where he recorded a song that glorifies the July 21 stabbing murders of Chaya, Elad and Yosef Salomon in their home by Omar al-Abed, 19, from Kobar, 13 km. northwest of Ramallah and near Halamish.The song was played at a wedding last week and a video of it was uploaded to social media.“I heard the sound of the machine gun in the Arab village Kobar... It’s Omar who crossed the woods and carried out the operation,” the song says.“Hey you, who asks about real men, you will find them in Kobar... Omar al-Abed is an earthquake who took revenge on behalf of al-Aksa... He came from above the mountains carrying a knife at his side, and when he announced the clash, he made the Zionists lie on the ground... Even if they arrest my mother and my father, and demolish our home, we will never wear clothes of disgrace,” it says.As part of the predawn operation that lead to Barghouti’s arrest, the studio was raided and equipment used to run it was confiscated. The singer’s collaborators on the song, as well as the producer and distributor of the music video, were also arrested. According to the Palestinian Authority’s Wafa news outlet, the band’s organist Naji Rimawi and the owner of a local music studio Nazaal Barghouti were arrested.As a part of a broader campaign against incitement, the IDF and Shin Bet (Israel Security Agency) closed the Al-Huriya radio station in Hebron, saying it regularly broadcasted content that incited violence and terrorism.Abed was arrested after the attack and remains in prison. He told interrogators he carried out the attack because of the tensions surrounding the Temple Mount. Just before he left his village, he published a Facebook post saying he expected to die to carry out the attack in Halamish.The IDF has demolished his family home and arrested members of his family who were convicted last week for their knowledge and support of the attack. Abed has been indicted. Some politicians have called for the death penalty.In addition, the IDF and Shin Bet forces carried out raids throughout the West Bank arresting 15 wanted Palestinians in Ramallah, Nablus, Balata, Mirka, Yabad, Rammun, Deir Abu Mash’al, Asira e-Shamaliya and Bani Naim. Eleven of them are suspected of terrorist activity and violent rioting.Troops also confiscated several weapons: nine homemade weapons in Beit Ur al-Fauqa, a pistol in Hebron and another homemade weapon in a-Ram.The IDF believes it is going to the root of the problem of illegal weapons in the West Bank by carrying out near-nightly raids, shutting down weapons factories and confiscating illegal arms.During IDF operations in al-Am’ari, some 200 Palestinians clashed with troops, burning tires and throwing stones at the soldiers. According to the army, several Palestinians were injured and taken to the hospital for treatment after troops responded with crowd dispersal methods.