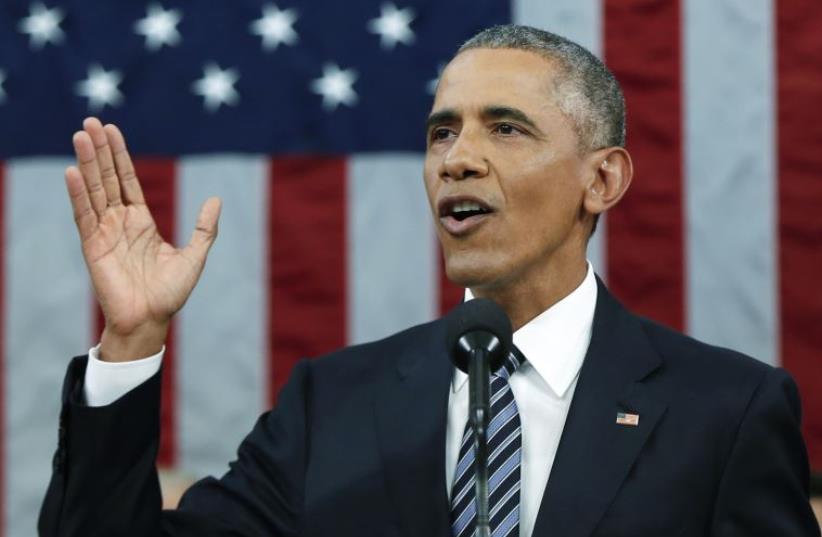 US President Barack Obama delivers his final State of the Union address to a joint session of Congress in Washington January 12, 2016.
(photo credit: REUTERS)
Advertisement
WASHINGTON – Last year, when an active black market for radioactive materials was uncovered in Moldova, Western governments publicly confirmed long-held private fears: Extremists not only have the capability to weaponize nuclear material, they have the ability to acquire that material.This challenge is the focus of a summit to take place on Thursday and Friday in Washington, where US President Barack Obama is hosting more than 50 global leaders to discuss the threat.The world’s most powerful terrorist organizations are incapable of enriching uranium or separating plutonium to weapons-grade on their own. But should they get their hands on existing material – already prepared in any one of several state-run programs – the US believes they are capable of harnessing its power for a dirty bomb, or worse.Obama’s original goal for the 2016 Nuclear Security Summit – the fourth in a series of confabs meant to address what he described, in 2009, as the “most immediate and extreme threat to global security” – was for global leaders to step back and assess the progress they have made to secure existing stockpiles.But the summit has adopted a sense of urgency, as the White House believes Islamic State is intent on acquiring radioactive material to conduct a nuclear terrorist attack.After its operatives were found last week to have been conducting surveillance on Belgium’s nuclear scientists, one senior administration official said the US is not aware of a specific, active Islamic State plot to obtain or use radioactive material.“Certainly the video footage is of concern and suggests that there is at least some interest by [Islamic State],” Laura Holgate, senior director for weapons of mass destruction and arms control on Obama’s National Security Council, told reporters in a phone call on Tuesday. “But we don’t have any indications that it was part of a broader planning to acquire nuclear materials, and we don’t have any information that a broader plot exists.”In the same call, Ben Rhodes, an Obama confidante and his deputy national security adviser for strategic communications, said that one summit meeting will focus specifically on the “prism of how we are working to prevent [Islamic State] from acquiring dangerous material.”“Everybody is concerned,” Rhodes said. “It’s important that, on the spectrum of threats posed by [Islamic State], we have a discussion that addresses the most lethal threat from terrorist organizations. And that’s their ability to acquire nuclear materials.”Country delegations arriving here – as well as several major private sector organizations – come bearing “gifts,” or pledges, demonstrating their commitment to the cause. Their gifts will go into one of 17 “baskets” representing a specific project: efforts to combat nuclear smuggling, for example, or on cybersecurity relating to nuclear security.Some states are working to remove all weapons-usable material from their territory. And prevention through the removal and destruction of material may be the world’s most promising strategy, as efforts to secure material – from Belgium to the former Soviet republic of Moldova – appear spotty at best.The UN’s International Atomic Energy Agency is responsible for keeping track of each country’s performance.But the agency repeatedly faces obstruction on grounds of a nation’s sovereignty, or over concerns that transparency will compromise national security. Interpol is the main body policing for smuggling rings.Summit participants expect on Friday to declare a communiqué of solidarity – one “more political” than those agreed upon after the last two summits, said Holgate. Out of more than 260 commitments made by 50 nations throughout the first three summits, nearly three-quarters have already been implemented, the Obama administration said.In a fact sheet released on Tuesday, the White House said it is “almost impossible” to quantify the likelihood of a nuclear attack perpetrated by extremist groups.“But we know that roughly 2,000 metric tons of nuclear weapons usable materials – highly enriched uranium and separated plutonium – are present in both civilian and military programs,” the document reads, “and we know that terrorists have the intent and the capability to turn these raw materials into a nuclear device if they were to gain access to them.”In 2010, Obama began raising alarms over the security of nuclear material worldwide. His concerns were complemented by another major Obama initiative: nuclear nonproliferation, specifically in Asia and the Middle East.The US president touts the nuclear deal reached with Iran last year as the crowning achievement in his larger nonproliferation strategy: Iran has been permanently prevented from acquiring nuclear arms, he says. But the bar set for Iran – the country is ultimately allowed to grow its nuclear program to an industrial scale – sets for others in the region a new standard for acceptable nuclear work.The addition of several advanced nuclear programs in the Middle East not only poses the risk of an arms race down the road, warn experts, it also increases the number of target facilities for smugglers and terrorists.Leaders from six world powers that negotiated the nuclear deal with the Islamic Republic plan to meet on the sidelines of the summit this week.Tehran has not sent a delegation to the summit. Nor has Moscow – “a missed opportunity for Russia, above all,” Rhodes said.“They have benefited enormously from cooperation on nuclear security and nonproliferation in the past,” he continued. “Given the amount of material in both of our countries and given the cooperation we’ve done in parts of the former Soviet Union, it is important for the world to see and to know that the United States and Russia have continued cooperation on issues related to nuclear security.”National Infrastructure Minister Yuval Steinitz is leading Israel’s delegation to the summit, which also includes the head of the Israel Atomic Energy Commission, Zeev Snir; the deputy head of the National Security Council, Yaakov Nagel; and representatives from the Foreign Ministry.