Curtis Jerrells scored 30 points for Jerusalem, including eight in the decisive run. 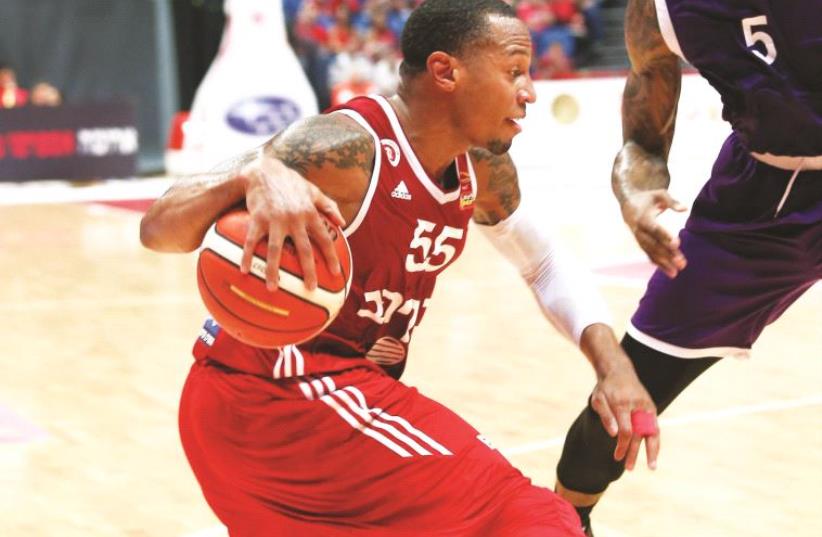 Hapoel Jerusalem’s Curtis Jerrells
(photo credit: DANNY MARON)
Advertisement
Hapoel Jerusalem survived a scare to return to winning ways in the BSL on Saturday night, going on a 14-0 game-ending run to beat Ironi Nahariya 75-67 at Jerusalem Arena.Curtis Jerrells scored 30 points for Jerusalem, including eight in the decisive run.Jerusalem saw its record 14-game BSL regular season winning streak snapped at Hapoel Gilboa/Galil last weekend. It bounced back with a victory over Olimpija Ljubljana to improve to 2-0 in the Eurocup and moved to 3-1 in local action on Saturday.Jerusalem was playing without Amar’e Stoudemire, who is in the US on personal business, and the injured Jerome Dyson. It will hope to have them both back for Wednesday’s Eurocup clash in Jerusalem against Lokomotiv Kuban Krasnodar of Russia.Jerrells ensured Hapoel enters that game on the back of a win, with Hapoel’s only other player in double figures on Saturday being Tarence Kinsey, who finished with 14 points.“We did a good job tonight,” said Jerrells. “We were short a lot of guys and everybody had to bring some extra energy and we did that.I found my rhythm and my teammates kept giving me the ball and I had to make players. In the fourth quarter we locked down and got stops and that is what it came down to.”Jerrells wasn’t too concerned with his team’s mediocre display on offense.“We had a tough road game in Ljubljana and we had to find a way to win,” he explained. “We will go back to practice and will make sure we get better in offense.”Jerusalem coach Simone Pianigiani was happy his team prevailed.“I’m happy today because this kind of game was a game of mistakes.Both teams played on the road in Europe and we were both missing players,” he noted. “This is a tough moment for us and I asked my players for an extra effort. At the beginning we weren’t energetic enough, but in the second half our offense was very good. We have a big game coming up on Wednesday, but we arrive with two victories on the road and we have two days to recover so that is good for us.”Nick Faust had 22 points for Nahariya, but missed a dunk that could have given his team a ninepoint lead with six minutes to play.Also Saturday, Maccabi Kiryat Gat claimed its first win, beating defending champion Maccabi Rishon Lezion 82-78. Eyal Shulman scored 22 points for the winners.