Beersheba knocked out of Europa League 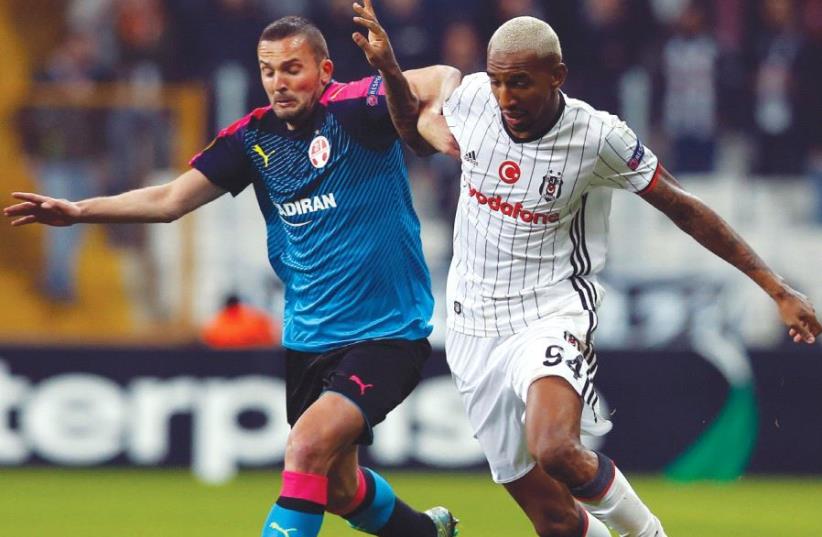 Despite Hapoel Beersheba and Ben Sahar’s (left) best efforts, the Israeli champion was knocked out in the Europa League round of 32 last night, losing 2-1 to Besiktas and Talisca (right) in Istanbul for a 5-2 aggregate defeat.
(photo credit: REUTERS)
Advertisement
Hapoel Beersheba’s historic European campaign came to an end in Istanbul on Thursday night.Beersheba entered the second leg of the Europa League round of 32 trailing Turkish champion Besiktas 3-1 following last week’s loss at Turner Stadium. The Israeli champion never came close to mounting a comeback, falling 2-1 in the return leg for a 5-2 aggregate defeat.Vincent Aboubakar’s opener in the 17th minute all but extinguished any hope Beersheba still had, although the visitors never stopped pushing forward, and were rewarded with an equalizer through Nigerian forward Anthony Nwakaeme in the 64th minute. Hapoel wouldn’t score again though, with Cenk Tosun officially putting the tie to bed with the winner three minutes from time.Despite the disappointing exit, Beersheba will look back on its 2016/17 continental campaign with great pride.Beersheba knocked out Greek giant Olympiacos in the Champions League qualifiers before just missing out on a place in the group stage with a tight defeat to Scotland’s Celtic. It received a place in the Europa League group stage as a consolation prize and went on to become the fourth Israeli side to come through a group in continental competition, joining Maccabi Haifa (2006/07), Hapoel Tel Aviv (2009/10) and Maccabi Tel Aviv (2013/14), who also all did so in the Europa League or its predecessor the UEFA Cup.Beersheba stunningly finished ahead of Inter Milan and Southampton to advance from its group, beating the Italian giant twice and drawing both matches against the English Premier League side.However, Besiktas proved to be too strong for Hapoel, which suffered from a drop in form in the two months that passed since the end of the group stage.“We experienced a wonderful journey which began last July and ended today,” said Beersheba coach Barak Bachar. “We competed in every match and showed that anything is possible. In virtually every game we faced teams that on paper were better and richer than us, but my players proved that they have an amazing character and showed that we are a very strong team of winners. I’m proud of every one of them. Now the real challenge will be to channel these energies as we move forward.”Despite leading the Israeli Premier League standings by 10 points at one stage, Beersheba could find itself tied on points with Maccabi Tel Aviv on Saturday should the yellow-and-blue beat Bnei Yehuda.Beersheba’s next match will be against Hapoel Kfar Saba on Monday.One of the team’s Besiktas could face in the last 16 is Manchester United. United registered a 4-0 aggregate victory over St Etienne, but the future of captain Wayne Rooney was what dominated the headlines.Rooney announced on Thursday that he intends to stay at the club, ending speculation that he could move to China.“Despite the interest which has been shown from other clubs, for which I’m grateful, I want to end recent speculation and say that I am staying at Manchester United,” Rooney said in a statement on Thursday.British media had reported that Rooney’s agent, Paul Stretford, was in China to see if he could negotiate a deal for the England forward to leave United and join the fast-growing Chinese Super League.Rooney, 31, has been unable to command a regular starting place under manager Jose Mourinho and faces a race to be fit for a likely substitute’s role in the League Cup final against Southampton at Wembley on Sunday.He missed his club’s Europa League win at St Etienne on Wednesday with a hamstring injury and Mourinho said he could not guarantee that the player would still be at Old Trafford for the final year of his contract, which expires after the 2017/2018 season.In the statement, on United’s website, he said: “I hope I will play a full part in helping the team in its fight for success on four fronts.”