Finishing career in Jerusalem ‘means the world’ to Stoudemire

The peace camp uses basketball as a bridge between people, in an effort to promote peace among the different ethnic and religious groups in Israel. 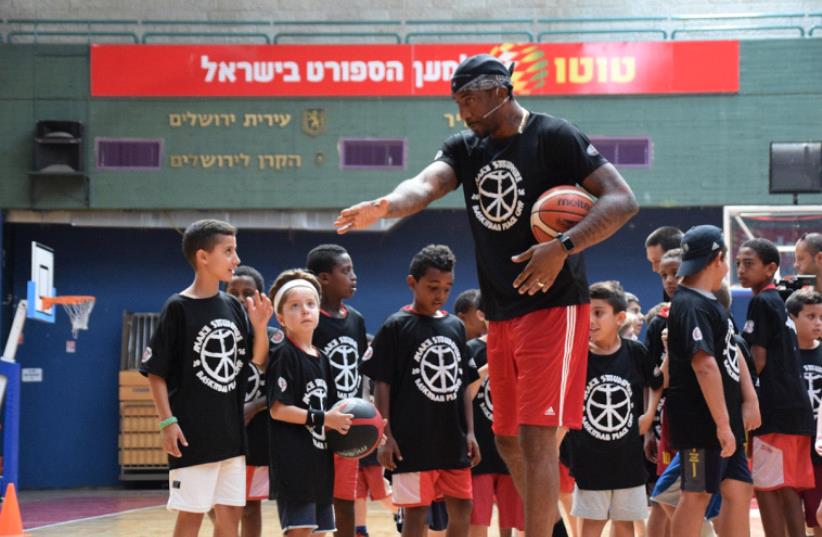 Stoudemire coaches children at the basketball "peace camp" Monday morning in Jerusalem (Hapoel Jerusalem).
(photo credit: COURTESY HAPOEL JERUSALEM)
Advertisement
The old Hapoel Jerusalem Malha Arena was filled with magnetic energy on Monday morning, as former six-time NBA all-star Amar’e Stoudemire’s basketball “peace camp” was taking place.The arena was packed with a diverse group of Israeli children from all ethnicities and religions. Amare’s wife, Alexis, told The Jerusalem Post it was important for them to have a diverse group of kids participating in the camp. Religious and non-religious Jews, as well as Israeli-Arabs, were in sight. Stoudemire was on the court coaching hands-on, and the children’s excitement was contagious.Israeli NBA player Omri Casspi and his Sacramento King’s teammate, Rudy Gay, along with NBA player Chris Copeland, also took part in the clinic.The peace camp uses basketball as a bridge between people, in an effort to promote peace among the different ethnic and religious groups in Israel.“My brand has always been about peace and education and I am now extending my brand internationally,” said Stoudemire to the Post.Stoudemire and his wife will return to the US shortly to pack their bags before they move to Jerusalem with their four children in late August, after announcing last week that he will be playing for Hapoel Jerusalem for the next two seasons.Stoudemire has been a part owner of the team since 2013, and is now strengthening his relationship with Israel, and Jerusalem specifically.About the upcoming move, Stoudemire said: “It means the world to me to end my career in Jerusalem.Jerusalem is probably my favorite city in the world, because of its history. So it’s a pleasure of mine to play here.”The former NBA star has been to Israel several times as part of his spiritual journey to connect with his Jewish roots and bring the message of peace.“It is a great honor and privilege for me to be able to give back to the fans,” he said while being bombarded with countless requests for photos and autographs, to which he calmly and patiently responded.Stoudemire has previously said that he is a Hebrew on his mother’s side and feels very connected to the Holy Land.“Basketball is a passion of mine. It is a love I have had since I was a little boy and now to continue to play basketball in Jerusalem is an opportunity that can only happen once in someone’s lifetime,” Stoudemire said in a press conference