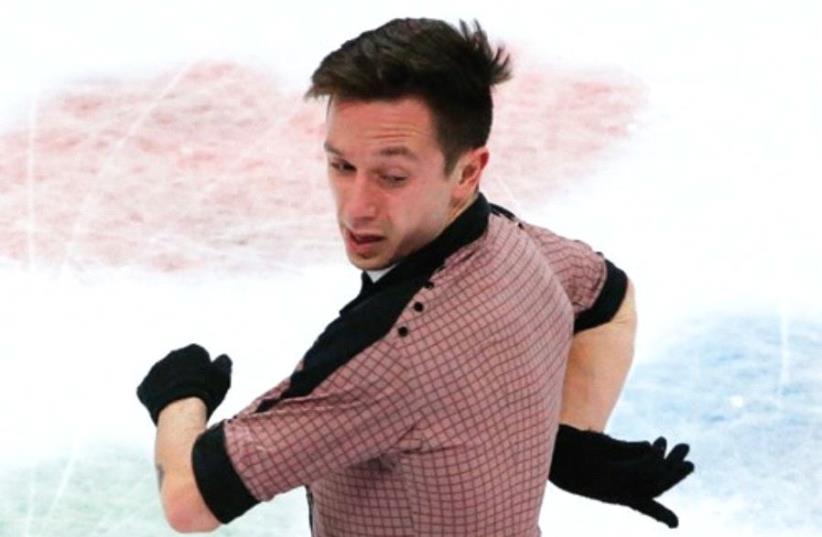 ISRAEL FIGURE SKATER Alexei Bychenko competes in the men’s short program at the ISU World Championships yesterday in Helsinki. (
(photo credit: REUTERS)
Advertisement
Alexei Bychenko qualified for the free skate at the figure skating world championships in Helsinki from 11th place on Thursday evening, becoming in the process the first Israeli to clinch his place at the 2018 Pyeongchang Winter Olympics.Bychenko registered a score of 85.28 points in the short program on Thursday and will be looking to improve on his 13th place finish at last year’s world championships when he competes in the free skate on Saturday.Bychenko, who also represented Israel at the 2014 Sochi Games, has registered an impressive improvement over the past year, winning his first career medal at a Grand Prix event in November, ending the men’s competition at the Rostelecom Cup in Moscow in third place.Bychenko, who became the first Israeli to claim a medal at the European Figure Skating Championships last January when he finished in second place, took a bronze in Moscow, finishing behind Spain’s world champion Javier Fernandez and Shoma Uno of Japan.Fernandez proved on Thursday that being a world champion is not just about being a quad-jumping powerhouse when he produced a mesmerizing short program to hold off a throng of challengers at the world championships.The Spaniard’s pursuit of a hat-trick of world titles could not have got off to a better start with a hypnotic performance to Spanish guitar music Malaguena to earn 109.05, shattering his previous personal best by almost five points.Fernandez’s skills left the rest of the field trailing and Uno ended up being the best-of-therest, finally emerging from the shadow of his more illustrious compatriot, Olympic champion Yuzuru Hanyu, to finish second with 104.86.The old-school style of Canada’s Patrick Chan also won over the judges as he broke the 100-point barrier in an international meet for the first time to finish third with 102.13. He was the only competitor in the top six to attempt only one quad in the two-minute-40-second routines.Before the start of the competition, all the hype had been about the number of high-scoring jumps the ‘Next Gen’ of skaters were cramming into their programs.On Thursday, 20 of the 36 skaters had ambitions to execute the jump that requires four complete aerial revolutions before touch-down on the ice.Of those, seven had included two quads in their short programs.American Nathan Chen, the first man in history to land four different types of quads (Lutz, flip, toe-loop, Salchow) and five in total in his free skate at this year’s US Championships, has been seen practicing six quads for Saturday’s free skate in Helsinki.He was flying high when he earned a whopping 19.47 points for his quadruple Lutz-triple toe-loop combination, the highest score for a single element on Thursday. But the 17-year-old soon came back down to earth with a painful thud when he fell over on his triple Axel.A score of 97.33 meant the Four Continents champion trailed in sixth place, 1.06 points behind Hanyu.Reuters contributed to this report.