Daunting challenge for Hapoel vs Valencia • Nahariya falls to Banvit in Champions League. 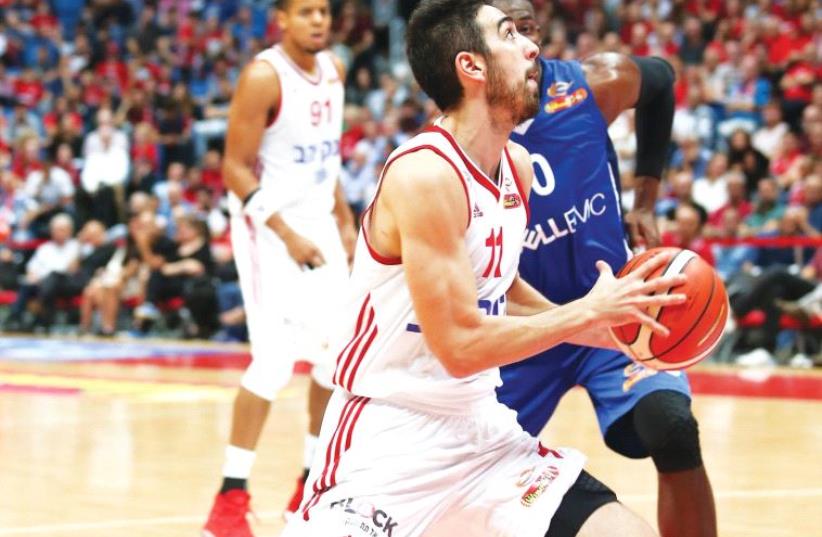 Hapoel Jerusalem guard Bar Timor aims to build on his impressive play in BSL action when the team visits Valencia tonight in its Eurocup regular-season opener.
(photo credit: DANNY MARON)
Advertisement
Hapoel Jerusalem owner Ori Allon has admitted that there was one main reason behind the appointment of Italian coach Simone Pianigiani this past summer.While he was pleased with the team’s achievements in local action over the previous two seasons under the guidance of coach Danny Franco, Allon wasn’t happy with Hapoel’s performance in Europe.Jerusalem has reached the Eurocup quarterfinals only once in the last six seasons, failing to make it past the regular season in 2014/15 before barely progressing to the Last 32 last season.Jerusalem opens its 2016/17 Eurocup campaign on Wednesday night with what is considered to be its toughest game of the regular season, a visit to Valencia in Spain.The signing of Pianigiani and the overhaul of the roster was mainly done in order to become a force in continental play once more and the Italian and his team face a baptism of fire on Wednesday.Hapoel also faces Lokomotiv Kuban Krasnodar of Russia, Olimpija Ljubljana of Slovenia and Ulm of Germany in Group D. The best four teams from each regular season group will advance to the Top 16, which will consist of four groups of four teams, which will play six round-robin games beginning in early January 2017.From there, the quarterfinals, semifinals and finals – each consisting of best-of-three playoff series – will be played in order to decide the 2017 Eurocup champion, which will qualify for the 2017/18 Euroleague.Valencia already got its campaign under way last week, crushing German side Ulm 95-58. Bojan Dubljevic led the way with 14 points and seven rebounds, with four other players scoring in double-digits.Hapoel has some fond memories from Valencia, becoming the first Eurocup team to beat the Spaniards on the road in January 2010 following a run of 32 wins and a tie.Jerusalem set a new club record by registering its 14th straight BSL regular season win, stretching back to last season, on Saturday night, beating Maccabi Kiryat Gat 88-79 on the road despite the absence of both Amar’e Stoudemire and Lior Eliyahu, who were rested ahead of Wednesday’s clash.“The draw set us up with the toughest game in the beginning, but it will be a good test for us,” said Pianigiani. “We want to compete in the highest levels of this tournament and our opponent on Wednesday is certainly one of them.”Veteran Israeli guard Yotam Halperin is hoping the team can make a statement in Valencia.“We are in a positive momentum from our local competitions and we would like to continue it on Wednesday,” said Halperin.“We will face one of the top teams in the Eurocup which means we will have to bring our best and stay focused the entire 40 minutes to be in a good position in this game.”On Tuesday, Ironi Nahariya began its FIBA Champions League group campaign with an 83-70 home defeat to Turkish side Banvit Bandirma.The score was tied at 65-65 with eight minutes to play, but Banvit went on a 12-0 run over the next four minutes to clinch the win. Stu Douglass had 17 points for Nahariya, while Gediminas Orelik led four Banvit players in double figures with 16 points.Nahariya also faces Fraport Skyliners of Germany, Aris Thessaloniki of Greece, CEZ Nymburk of the Czech Republic, Helios Suns of Slovenia, Bakken Bears of Denmark and AS Monaco of the French league in Group A.The regular season consists of four groups of eight teams each, with the four best ranked teams from each group after 14 games to advance to the playoffs.On Wednesday, reigning BSL champion Maccabi Rishon Lezion starts its Champions League group campaign when it visits Kataja Basket in Finland.