Greens close on surprise Final Four berth after beating No. 1 seed on the road; Mac TA can clinch progress tonight 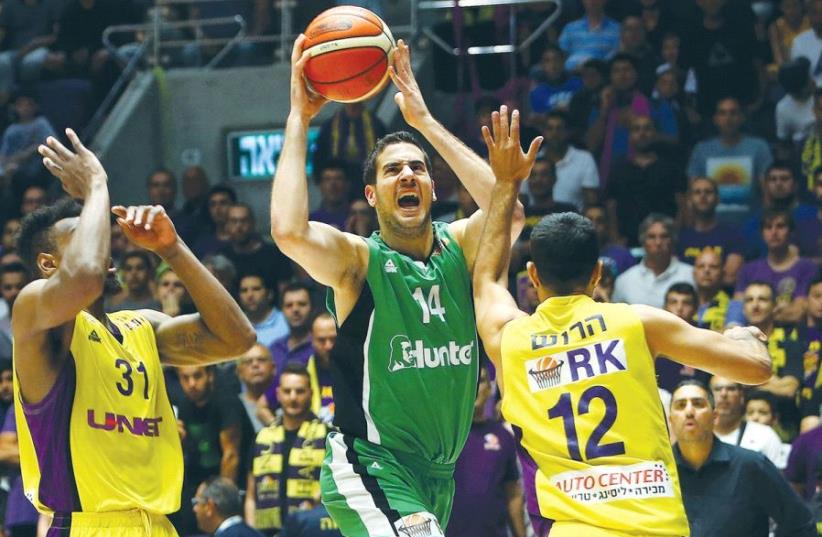 Maccabi Haifa forward Oz Blayzer (center) drives to the basket during last night’s 78-77 win over Hapoel Holon in Game 3 of their BSL quarterfinal series
(photo credit: UDI ZITIAT)
Advertisement
Maccabi Haifa is one win away from becoming the first No. 8 seed to knockout a top seed in BSL playoff history, taking a 2-1 lead over Hapoel Holon with a 78-77 road victory on Wednesday night.Haifa only qualified for the playoffs on the final day of the regular season, but has improved significantly in the post-season and can secure its progress to the Final Four when it hosts Game 4 at Romema Arena on Sunday.Holon, which lost by 31 points in Game 2 after eking out a win in double- overtime in the series opener, led by nine points after 10 minutes on Wednesday. But Haifa seized control with a 17-0 run at the end of the third period and the start of the final frame before surviving a late Holon comeback, with Tu Holloway missing a three at the buzzer that would have given the hosts a dramatic win.Haifa was led by backcourt duo Willy Workman and John DiBartolomeo, with the former finishing with 19 points and 11 rebounds while the latter had 19 points and six assists.Holloway had 21 points and 12 assists for Holon.Holon got off to the better start on Wednesday, taking a nine-point margin (24-15) into the second quarter.The hosts couldn’t build on the momentum though, with Haifa dominating the second frame. The Greens outscored Holon 25-9 in the period to open a seven-point gap (40- 33) at the break.It took Haifa almost four minutes to score its first points of the second half, allowing Holon to regain the lead. A 15-2 run by the hosts was capped by Holloway’s three-pointer midway through the quarter, but Haifa would wrestle back control.A 17-0 surge over seven minutes at the end of the third period and the start of the fourth quarter put Haifa in pole position (59-48), with DiBartolomeo scoring three triples during the run.A late surge saw Holon close within a single point (76-75) with 9.8 seconds to play, but the hosts couldn’t complete a comeback, leaving them on the verge of a surprise exit.Playoff action continues on Thursday when Maccabi Tel Aviv can become the first team to advance to the Final Four. Maccabi hosts Bnei Herzliya with a 2-0 lead, winning the first two games of the series by an average 20 points. The yellow-andblue has looked reinvigorated under the guidance of Arik Shivek, who replaced Ainars Bagatskis following the end of the regular season, becoming the team’s fourth head coach of the year.“We are enjoying ourselves and I think that if we continue this way nobody will be able to beat us,” said guard Andrew Goudelock. “The coach has changed everything. We are all having fun and it is a shame it wasn’t this way earlier in the season.”Also Thursday, No. 2 seed Hapoel Eilat hosts Maccabi Rishon Lezion, aiming to move back into the lead after losing Game 2 in Rishon by 26 points.On Friday, Ironi Nahariya can complete a shock series win over Hapoel Jerusalem when it visits the capital for Game 3 with a 2-0 lead.“We registered another great win in Game 2, but the series is far from over,” said Nahariya coach Eric Alfasi.“We have reached this point thanks to our team play and we need to continue that way to have a chance to advance.”