Maccabi Haifa wins to round out top-6

Millions of shekels, a chance to qualify for European competition and plenty of pride were on the line for Haifa. 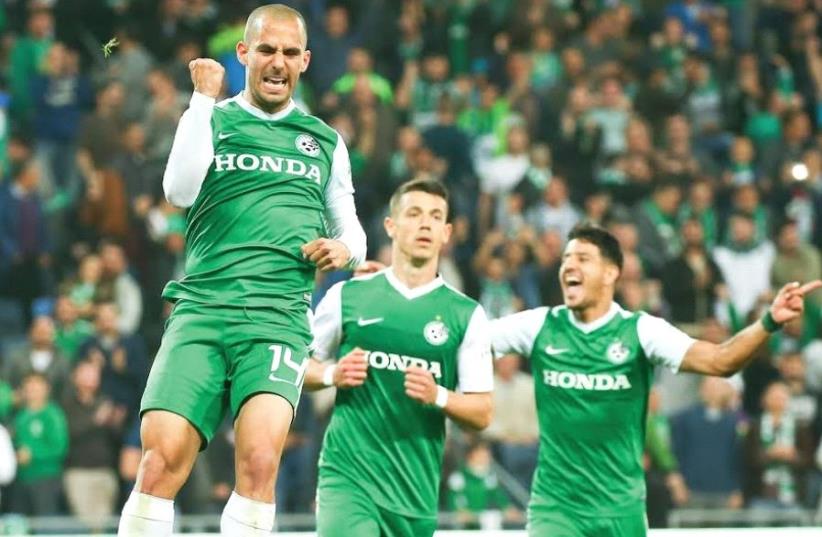 Maccabi Haifa’s Gili Vermouth
(photo credit: DANNY MARON)
Advertisement
Maccabi Haifa’s nightmare season could still end on a sweet note after it eked into the Premier League championship playoffs on Saturday night.Haifa’s 2-0 win over Hapoel Ra’anana, its third in four matches under coach Guy Luzon, moved it up to sixth place at the expense of Ironi Kiryat Shmona, which lost 2-1 to Hapoel Kfar Saba.Millions of shekels, a chance to qualify for European competition and plenty of pride were on the line for Haifa, and while it was far from impressive yet again, two penalties by Gili Vermouth (20, 45) ensured the Greens finished the regular season in the top six.Haifa entered its final regular season match tied on points and goal difference with Kiryat Shmona in sixth place, with the latter having the edge having scored more goals.Haifa was within one goal of missing out on the playoffs after Oded Elkayam gave Kiryat Shmona the lead against Kfar Saba in the 65th minute. But the Greens managed to maintain their two-goal cushion, while Kiryat Shmona’s gamble on offense ended up costing it dearly.Sunny Omoregie leveled the score for Kfar Saba in the 78th minute and Eli Elbaz gave the visitors their first victory after 16 games in the first minute of stoppage time, moving Kfar Saba four points clear of the relegation zone.Bnei Sakhnin needed a point against Hapoel Tel Aviv to book its place in the championship playoffs and it got it with a 0-0 draw.“This is a big relief,” admitted Haifa coach Guy Luzon. “It was very important to remain focused on our job and not think of Kiryat Shmona or Sakhnin. We have no reason to celebrate and we need to build on this.”In the championship playoffs, the top six will play each other twice more for a total of 10 matches for each team. In the relegation playoffs, the bottom eight sides face one another one more time for a combined seven games each, with the bottom two teams to be demoted to the National League.Qualification for the championship playoffs has not only kept alive Haifa’s hopes of reaching European competition next season, but has also guaranteed the club big pay days with additional home matches against Hapoel Beersheba, Maccabi Tel Aviv and Beitar Jerusalem.Fourth place will be good enough for a place in the Europa League qualifiers in 2017/18 should either Maccabi Tel Aviv or Beitar Jerusalem win the cup and finish in the top three.Elsewhere Saturday, Ashdod SC claimed a surprise 1-0 win at Maccabi Petah Tikva thanks to Dan Bitton’s 88th-minute goal.Maccabi Tel Aviv can tie leader Hapoel Beersheba on points for at least 24 hours when it welcomes Hapoel Haifa on Sunday, with Beersheba hosting Beitar Jerusalem on Monday.