Third-division side upsets Premier League foe thanks to stoppage-time winner; Beersheba also through. 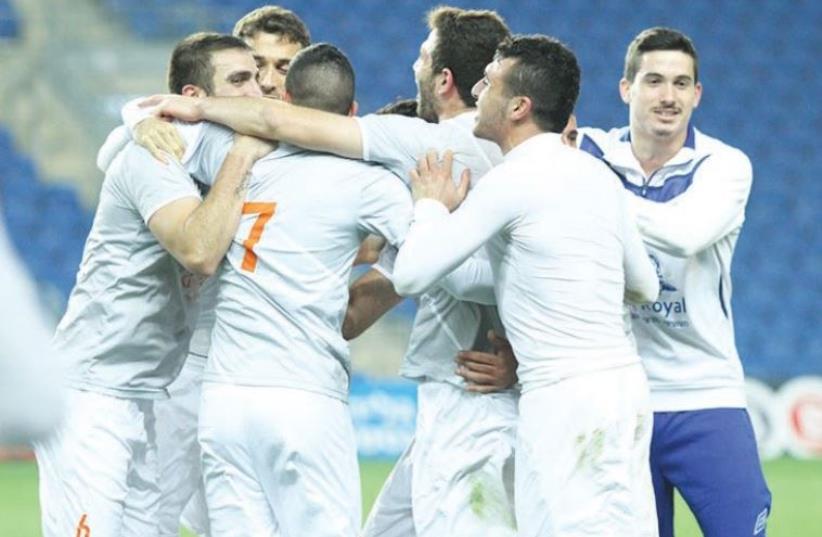 Ness Ziona players celebrate after stunning Maccabi Netanya of the Premier League in the State Cup round of 32 last night
(photo credit: SPORT1)
Advertisement
Maccabi Netanya’s disastrous season hit a new low on Tuesday night with a shock exit at the hands of third-division Ness Ziona in the State Cup round of 32, while last season’s finalist Hapoel Beersheba safely progressed to the last-16.Ness Ziona, which is in second place in the southern district of Liga Alef, registered a 1-0 victory at the Premier League’s basement boys thanks to Yotam Penso’s dramatic winner in the fourth minute of stoppage time.Netanya was guided on Tuesday by assistant coach Guy Tzarfati after the side’s second head coach of the season Reuven Atar was sacked on Sunday. The team failed to win any of his eight league matches in charge and sits in last place in the standings, nine points from safety.“I don’t know if Netanya has become the joke of Israeli soccer but this is another unpleasant day for the club,” said Tzarfati, who is one of the candidates to replace Atar on a full-time basis. “There are a lot of people who don’t deserve this, including the fans. I hope we can get out of this slump. There is a serious problem here, but we believe we can break out of this.”Ness Ziona coach Ohad Buzaglo said he always believed his team was capable of beating Netanya.“There isn’t such a big difference in quality between these teams,” said Buzaglo.“We played an all-around excellent match.”Tuesday was a particularly happy day at the Buzaglo household, with Ohad being joined in the last-16 by three of his brothers.His most famous and successful brother Maor started for Beersheba in its 1-0 win over Maccabi Kiryat Gat in Ramle.Ben Sahar scored the only goal of the match in the 36th minute, making the most of a rare start and helping Beersheba take a first step towards erasing the memories of last season’s unprecedented 6-2 defeat to Maccabi Tel Aviv in the cup final.“We didn’t play well but in the cup the only thing that matters is that you advance,” said Beersheba coach Barak Bachar.Asi Buzaglo will also be in the next round after Hapoel Ashkelon of the National League defeated Hapoel Baqa al-Gharbiyye 3-0, while Almog Buzaglo and Bnei Yehuda advanced with a nail-biting 2-1 win over Hapoel Acre in one of two all-Premier League showdowns.Zion Zemah gave Acre the lead at Bloomfield Stadium in the 28th minute, but Pedro Galvan equalized in the 65th minute before netting the winner two minutes from time.In Tuesday’s other all-top flight meeting, Maccabi Petah Tikva beat Ironi Kiryat Shmona 2-0 in a preview of the Toto Cup final. Dor Hugi (50) and Guy Melamed (61) scored for Petah Tikva.Bnei Sakhnin and Hapoel Haifa both survived mighty scares against inferior opponents before advancing on Tuesday.Sakhnin trailed against Beitar Kfar Saba of the third division until stoppage time when Abraham Paz canceled out Zion Azulay’s opener from the 80th minute.Weeam Amasha clinched Sakhnin’s progress four minutes into extra time.Haifa found itself down 1-0 to Maccabi Kabilio Jaffa of the third division, but a Zarko Korac (60) strike, a Freddy Zion (71) own-goal and a Hanan Maman (75) finish ensured the Premier League club qualified for the next round.State Cup action continues on Wednesday with five more matches, including the mouthwatering showdown between Maccabi Haifa and Beitar Jerusalem at Haifa Stadium. Maccabi Tel Aviv visits Hapoel Ramat Hasharon in the final round-of-32 encounter on Thursday night.