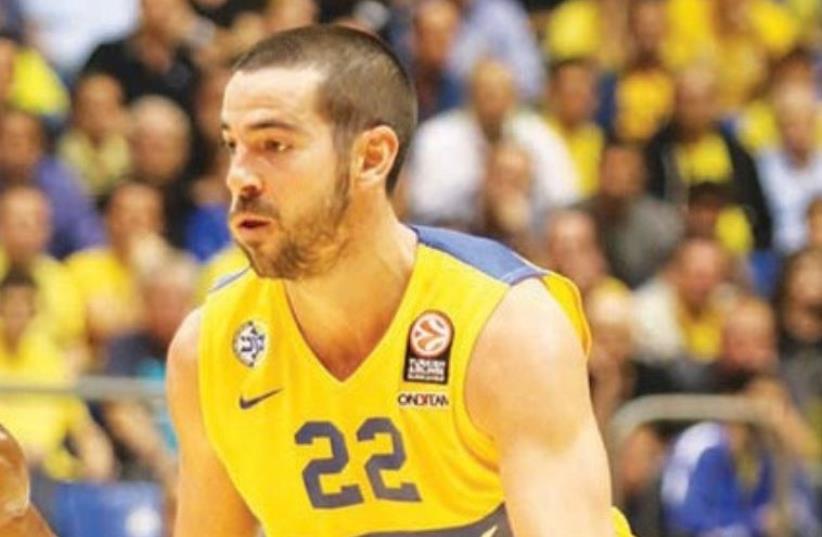 Maccabi TA guard Taylor Rochestie
(photo credit: ADI AVISHAI)
Advertisement
Maccabi Tel Aviv looks to improve to 2-0 in the Eurocup Last 32 when it visits BC Nizhny Novgorod in freezing Russia on Wednesday night, while Hapoel Jerusalem aims to bounce back from its opening defeat when it hosts Gran Canaria.After being knocked out in the Euroleague regular season for the first time in club history earlier this season, Maccabi was sent to play in the Eurocup and it cruised to a win in its first-ever game in the competition last week, beating a mediocre Olimpija Ljubljana 82-73 at Yad Eliyahu Arena.However, the yellow-andblue will face a far tougher test on Wednesday when it visits Novgorod, where temperatures have plummeted to -20 Celsius in recent days. Maccabi can ask Hapoel Jerusalem how stiff a contest it is set to face, with Nizhny beating the Israeli champion both home and away in the Eurocup regular season, including by 21 points in Russia.With Jordan Farmar leaving Maccabi earlier this week and Gal Mekel only to be available in the second half of the Last 32 when teams can register new players, Tel Aviv will have to manage with a single pointguard on Wednesday.Taylor Rochestie returns to his old hunting ground after finishing as the Euroleague’s top scorer in the regular season while playing in Novgorod last season and will have to shoulder playmaking responsibilities with Yogev Ohayon also out injured.“I’m very excited that Gal’s coming. It’s great for this team, great for this country. We’re very fortunate to get him and I think he can help this team a lot,” said Rochestie, who scored a dramatic three-pointer with 0.4 seconds to play to give Maccabi a 73-70 win over Maccabi Haifa in the State Cup quarterfinals on Saturday.“I’m not used to the weather in Russia anymore, I’m in my new home now in Tel Aviv, and it’s going to be a little different going back to Nizhny. I told the guys to dress very, very warm.It’s going to be cold, even in the gym, and we’ve got to be ready for this.”Jerusalem was neck-and-neck with Avtodor Saratov for the first 31 minutes of last week’s contest in Russia, but ran out of steam in the closing period, losing 105-96. Hapoel hasn’t played since after already being knocked in the last 16 of the cup, allowing it to fully focus on the clash with Canaria.The Spaniards went 8-2 in the Eurocup regular season but suffered a surprise 85-76 defeat at home to Strasbourg in their Last 32 opener last week.Elsewhere Wednesday, Maccabi Rishon Lezion hosts Kataja of Finland in the Europe Cup Round of 32. Rishon improved to 1-1 last week with a win over ASVEL Basket Villeurbanne of France.Rishon will be in action for the third time in five days after beating Bnei Herzliya in the cup on Saturday and losing to Hapoel Holon in BSL action on Monday.