“This isn’t the time to talk about what happened with Eran Zahavi. We have a game against one of the strongest national teams in the world coming up.” 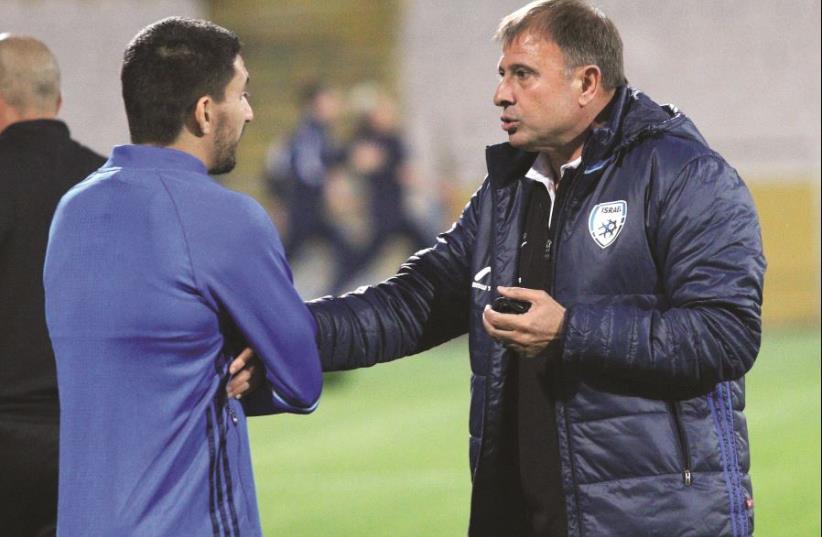 Israel national team coach Elisha levy
(photo credit: ADI AVISHAI)
Advertisement
With the shock retirement of captain Eran Zahavi overshadowing the Israel national team’s preparations, the blue-and-white enters Tuesday’s 2018 World Cup qualifier against Italy in Reggio Emilia hoping mainly to avoid further embarrassment.The 1-0 loss to Macedonia in Haifa on Saturday significantly hurt Israel’s chances of finishing in third place ahead of Albania and left it only three points above the Macedonians in fifth. The countdown to the end of the campaign essentially began with the final whistle in Haifa, with Israel playing for little more than pride and FIFA ranking points in its remaining three qualifiers.The national team wraps up its campaign next month, visiting Liechtenstein on October 6 and then hosting Spain at Teddy Stadium in Jerusalem on October 9.Coach Elisha Levy’s chances of receiving a contract extension and guiding the team in Euro 2020 qualification look to be nonexistent after another dejecting performance saw the blue-and-white drop to its third straight loss.Israel seemed to be well placed to finish in third place – which isn’t good enough to advance, but was the target set ahead of the campaign – after registering three consecutive victories, including against Albania on the road. But an expected 4-1 thrashing at Spain was followed by a humbling 3-0 home defeat to Albania and Israel’s campaign hit rock bottom with the loss to Macedonia.Levy’s decision to gamble on a starting lineup that hadn’t even practiced together during the week backfired spectacularly, but nobody was talking about his costly mistakes afterwards.Instead, it was the Zahavi armband scandal which made all the headlines. The star of the team flung the captain’s armband in protest for being booed by local fans, explaining afterwards that he was unable to control his anger.After a tumultuous day during which the Israel Football Association suspended him indefinitely and Minister of Culture and Sport Miri Regev attacked Zahavi for “trouncing the values by which we try to educate future generations,” the striker announced his retirement on Instagram.While Israel’s players were shocked by the news, which they first heard of when they arrived at Milano airport on Sunday night, Zahavi’s absence on the pitch isn’t supposed to be too costly for the national team. Zahavi never managed to translate his club form to the international level in his 39 appearances for the blue-and-white, scoring seven goals in all.Veteran defender Tal Ben-Haim is expected to captain the team against Italy, which is desperate to rebound from Saturday’s 3-0 defeat in Spain that left it three points back of first place.“We need to quickly bounce back because we are facing a very difficult match,” said Ben-Haim.“This isn’t the time to talk about what happened with Eran Zahavi. We have a game against one of the strongest national teams in the world coming up.”