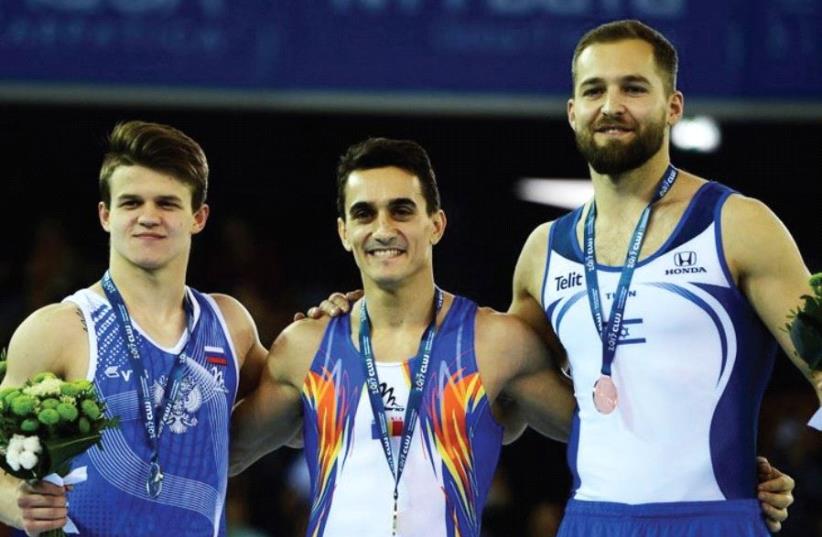 Israel’s Alex Shatilov (right) won the bronze medal in the floor final at the European Artistic Gymnastics Championships Romania yesterday, finishing behind Romanian winner Marian Dragulescu (center) and Russia’s Dmitri Lankin (left).
(photo credit: EUROPEAN ARTISTIC GYMNASTICS CHAMPIONSHIPS WEBSITE)
Advertisement
Israel’s Alex Shatilov further improved his remarkable record at the European Artistic Gymnastics Championships on Saturday, claiming a seventh career medal in the floor final.The 30-year-old registered a thirdplace score of 14.400 points, with local favorite Marian Dragulescu winning with 14.500 and Russia’s Dmitri Lankin taking the silver with 14.466.Israel’s Artem Dolgopyat finished fourth with a score of 14.333, with two Israelis competing in the same final at the European Championships for the first time ever.Shatilov was participating in his first major championship since his disappointing showing at the Rio Olympics last summer, mulling over the possibility of retirement before deciding to extend his career.Shatilov also claimed a bronze medal at the Europeans last year in Bern, Switzerland, and has only missed out on a place on the podium at the continental championships one time since 2008, finishing in fourth place in France in 2015.He scaled the podium in each of his previous five appearances at the championships, winning bronze medals in 2009, 2012 and 2014, a silver in 2011 and a gold in 2013. He missed the competition in 2010 through injury.Shatilov will now turn his focus to September’s World Championships in Montreal, Canada. Shatilov has two bronze medals to his name from the World Championships, but the last of which came six years ago.“Shatilov is a really rare talent,” said Israel Gymnastics Association chairman Rafi Peled. “Alex leaves us all spellbound and has shown that he can overcome the great difficulty of being among the best European and world gymnasts for so many years. He is a role model for our next generation which looks up to him. Dolgopyat is the proof that Israeli gymnastics also has a bright future.”The Israel delegation will have another finalist on Sunday, with Andrey Medvedev to take part in the vault final for which he qualified from eighth place overall.Minister of Culture and Sport Miri Regev called Shatilov to congratulate him.“You have a great character and lifted yourself after the Rio Olympics to register this impressive achievement,” said Regev. “You brought great pride to Israeli sport and to the State of Israel once more.”