It was just five years ago that the team was celebrating its second championship after beating Maccabi Tel Aviv in the Final Four title game following a win over Hapoel Jerusalem in the semis. 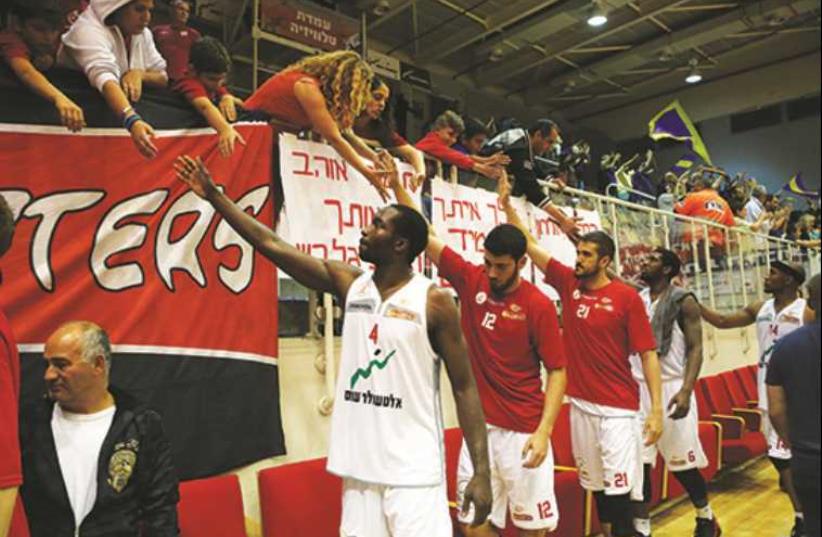 Hapoel Gilboa/Galil basketball
(photo credit: UDI ZITIAT/BSL)
Advertisement
It was once the hotbed of Israeli basketball talent. A club at which numerous hopefuls took their first steps on the way to stardom.Omri Casspi, Gal Mekel, Oded Katash and Doron Sheffer are just a few of the names that owe much of their success to the opportunity they were given by Hapoel Gilboa/ Galil, or as the club was previously known, Hapoel Galil Elyon.Many coaches also embarked on their prolific careers at the club, from David Blatt, who got his first coaching job at Galil Elyon in 1993, to Katash, who was granted his first chance on the sidelines in 2004.The arena in Kfar Blum and then at Gan Ner allowed players to fully focus on perfecting their craft away from the distractions of the big cities.This was a club willing to afford inexperienced players a chance to prove themselves, and so many of them made the most of it to propel their careers forward.The young players were once adopted by local families at Kibbutz Kfar Blum, giving the club a college atmosphere unique in Israeli hoops.Since 2007, when it moved to Gan Ner to receive the financial backing of the Gilboa Regional Council, the club struggled to maintain that special feel. Any hope of returning to its glory days may now be gone forever after it was relegated to the second division on Monday, ending a 35-year run in the top flight.It was just five years ago that the team was celebrating its second championship after beating Maccabi Tel Aviv in the Final Four title game following a win over Hapoel Jerusalem in the semis.Galil Elyon is also the last team other than Maccabi to win a championship in a series rather than a single game or two-game format.Under the guidance of Pini Gershon, the team ended the yellowand- blue’s 23-year championship streak in the semis in 1992/93 before beating Hapoel Tel Aviv in the best-of-five final.The future looked so bright when up-and-coming coach Katash led a group of youngsters by the names of Jeremy Pargo, Brian Randle and Elishay Kadir to the league title in 2010.However, as is often the case in Israeli basketball, the local powerhouses picked apart their unexpected conqueror, with Katash and Randle departing for Jerusalem and Pargo and Kadir moving to Tel Aviv.Nevertheless, the newly built team guided by Katash’s assistant, Lior Lubin, returned to the BSL final the following season, this time losing to the yellow-and-blue.However, the decline continued in the subsequent campaign when it was knocked out in the quarterfinal playoffs before finishing well off the top of the standings in the past couple of years.A 10-game losing streak midway through this season saw Gilboa drop to last place and resulted in the sacking of coach Barak Peleg.His replacement, Ariel Beit-Halachmi, led the team to just three wins in nine games and Gilboa lost any chance of surviving on Monday with two regular season games still to play.“This is hard to swallow,” said club owner Haim Ohayon. “We have been chasing our rivals since the start of the season and unfortunately what had worked for us in previous years didn’t work this time.”The move to Gilboa eroded the club’s original fan base, with a loud yet small group of around 50 fans the only ones giving the team any support in its home games in Gan Ner.Ohayon once more gave a chance to a young coach and green players, but Peleg couldn’t get the roster to play as a cohesive unit and the likes of Nimrod Tishman, Rafi Menco and Itay Segev failed to live up to expectations.The decline of the club can be related to the dearth of local talent in recent years. The generation that followed Casspi and Mekel, who both turn 27 this year, hasn’t produced any top class players and the Israel national team has also struggled to replace retiring players as a result.That is a problem which effects every team in the BSL, but especially Gilboa, which has been forced to take bigger risks on players in every passing season, gambles which inevitably backfire.While Gilboa is now guaranteed to end the season in last place, which leads to demotion to the second division, there is a scenario in which it will still play in the BSL next season.Should another team in the BSL, or the team promoted from the National League, fail to meet the league’s minimum budget or decide that it isn’t interested in playing in the top flight, Gilboa would be offered its place.It wouldn’t be a first such instance either, with Maccabi Ashdod avoiding relegation last season after Barak Netanya, which finished in ninth position, chose to forgo its place in the BSL for financial reasons.Ohayon announced on Monday that as long as the Gilboa Regional Council wants him around, he will continue to back the club.However, there are serious doubts regarding the council’s future plans, with elections for a new council head to be held next month following the resignation of Danny Atar after he was elected to the new Knesset as part of the Zionist Union list.Atar was a big supporter of the club, but there is no guarantee that the council’s next chief will be as interested in spending precious resources on a basketball team.“The future of Gilboa/Galil and Galil Elyon was never secure in the past,” said Ohayon. “But this club has always managed to reinvent itself and I believe and hope that will happen once more this time.”For the sake of Israeli basketball as a whole, hopefully that proves to be the case.allon@jpost.com