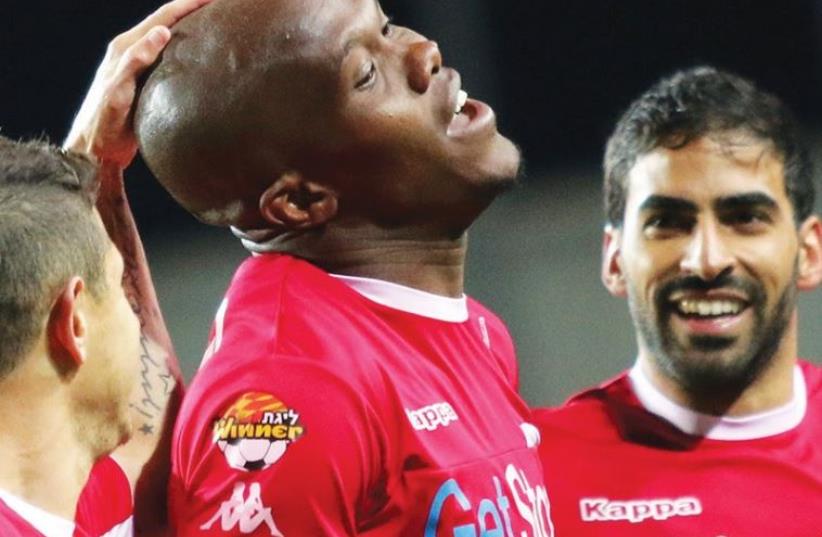 Hapoel Beersheba striker Anthony Nwakaeme (center) celebrates with teammates after scoring a goal
(photo credit: ADI AVISHAI)
Advertisement
Hapoel Beersheba remained on course to reach a second straight State Cup final after claiming a 2-1 win at Maccabi Petah Tikva on Wednesday night in a tricky tie in the round of 16.The bitter memories from last season’s 6-2 drubbing in the final at the hands of Maccabi Tel Aviv will live long in the memory of Beersheba fans and players.Beersheba currently leads the Premier League standings by one point from Maccabi and is targeting its first championship in 40 years.However, it is still desperate to also end its 19-year drought in the cup, coming through a stern test in Petah Tikva on Wednesday.Anthony Nwakaeme gave Beersheba the lead after 13 minutes, with Ben Biton stealing the ball on the right flank, squaring it for Maor Buzaglo who left the Nigerian with an easy finish from five meters out.Omer Danino leveled the score in the 26th minute, but Beersheba moved back in front for good just two minutes later, with John Ogu’s through ball leaving Ben Sahar with only goalkeeper Tzahi Gigi to beat.“We didn’t play so well in the second half, but that is only natural as the players wanted to hold on to the lead and advance,” said Beersheba coach Barak Bachar. “What is good about this squad of players is that no matter who plays, we still look like a team. Every player knows his role and does it properly. We are having an excellent season, but we can’t take our foot off the gas.”Maccabi Haifa also advanced on Wednesday, beating Hapoel Haifa 1-0 in the derby courtesy of Glynor Plet’s winner in the fifth minute.Beersheba and Haifa joined Hapoel Kfar Saba, Bnei Sakhnin, Bnei Yehuda and National League sides Beitar Tel Aviv/ Ramle and Hapoel Ashkelon, who all advanced to the quarterfinals on Tuesday.The draw for the last eight will be held on Thursday afternoon, with the final qualifier to be determined later in the day when cup holder Maccabi Tel Aviv visits Hapoel Rishon Lezion of the second division.Maccabi’s new Portuguese striker Orlando Sa could make his debut off the bench after completing a move from Reading of the English Championship for a fee estimated at 800,000 euros on Tuesday.“We want to win the cup and to do so you must win every game you play in the tournament,” said Maccabi coach Peter Bosz, who has won all four of his matches at the helm since joining the club. “I’m happy Sa is here and we need all of the good players that we can get. He is a goal scorer and a real number 9 and I hope he will do well with us.”