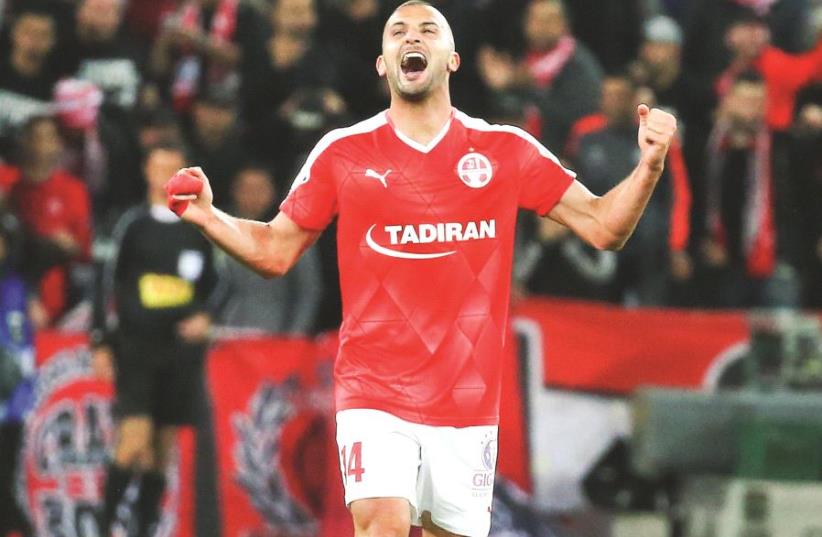 Hapoel Beersheba’s Ben Sahar
(photo credit: DANNY MARON)
Advertisement
Hapoel Beersheba took a stranglehold on the Premier League title race on Saturday, moving six points clear of Maccabi Tel Aviv with a 1-0 win in the showdown between the top two at Turner Stadium.The tight affair was ultimately decided by a contentious decision by referee Roei Reinshriber, who awarded Beersheba a penalty for what he deemed as an Eli Dasa foul on Maor Melikson. Ben Sahar converted the spot kick in the 23rd minute and Beersheba held on to take a massive step towards a second straight championship, opening a sixpoint gap while also holding a significant advantage in goal difference, with eight matches to play.Beersheba improved its almost perfect record at home this season, registering a 14th win from 15 games, taking its overall unbeaten streak at the stadium since its opening at the start of last season to 32 league games (26 wins and six draws).Beersheba snapped Maccabi’s seven- match winning streak, also handing the team a first defeat since the hiring of new coach Lito Vidigal, who had won his first five games at the helm.Elsewhere, the buildup to Saturday’s match between Maccabi Haifa and Beitar Jerusalem was overshadowed by Beitar’s announcement that it would walk off the pitch should its fans chant racist songs. But that became no more than an afterthought after Haifa registered a thrilling 3-2 win and Beitar owner Eli Tabib backtracked on his threat shortly before the match following a conversation with Minister of Strategic Affairs Gilad Erdan, who agreed to place 70 policemen in the Beitar stand in order to arrest any fan who breaks the law.Beitar could have closed to within three points of Maccabi Petah Tikva in third place with a win, but despite twice taking the lead, ultimately dropped to its third defeat in four league matches.Hen Ezra’s (22) opener was canceled out by Mohammed Awaed’s goal 10 minutes later, only for Itay Shechter to move Beitar back in front with a penalty five minutes from the break. Former Beitar striker Nikita Rukavytsya needed just two minutes to level the score once more and the Australian netted the winner seven minutes into the second half to bring Haifa within two points of Beitar.Beitar ended the match with 10 men following Hen Dilmoni’s sending off in the 71st minute, meaning he will miss Wednesday’s State Cup semifinal against Maccabi Tel Aviv.Hapoel Tel Aviv climbed out of the relegation zone on Saturday, beating Bnei Yehuda 2-0. Toto Tamuz (38) and John Chibuike (56) scored for Hapoel, which held on for the win despite having to play the final third of the match with 10 men following Edi Gotlieb’s sending off in the 60th minute.Bnei Yehuda, which faces Hapoel Ramat Gan in the cup semifinals on Tuesday, is just six points above the relegation zone, a cushion which will be reduced to five should Hapoel Kfar Saba not lose against Hapoel Ra’anana on Sunday. Rock-bottom Hapoel Ashkelon hosts Ashdod SC on Monday.Also Saturday, Hapoel Haifa effectively secured its survival with a 2-0 win over Ironi Kiryat Shmona. Shlomi Arbeitman (10) and Liran Sardal (60) scored for Haifa, which was guided for the first time by Nir Klinger following the resignation of Danny Golan.