Super Bowl 50: Broncos or Panthers — which team is the chosen one? 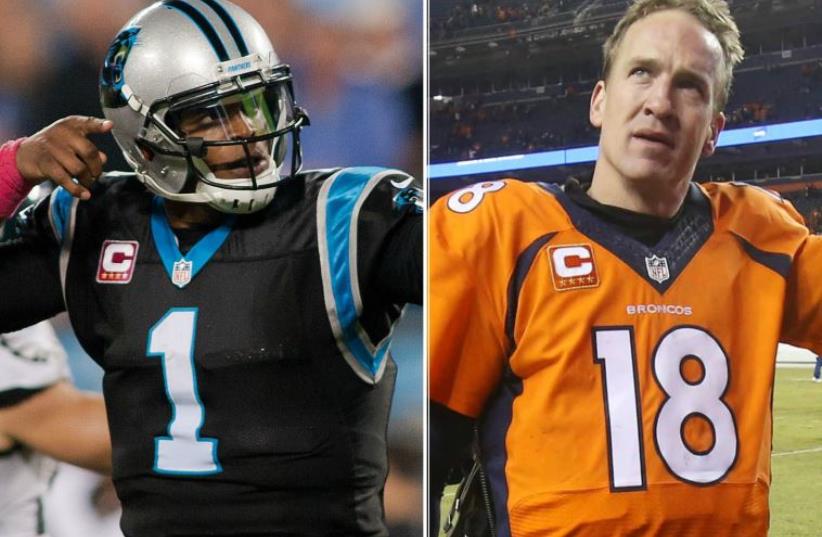 Denver Broncos quarterback Peyton Manning (R) and Carolina Panthers quarterback Cam Newton
(photo credit: REUTERS)
Advertisement
When the Denver Broncos face the Carolina Panthers in Sunday’s Super Bowl 50, only one team will emerge victorious. But two rabbis are giving the nation’s most-watched sporting event a win-win outcome.Rabbi Judith Schindler of Temple Beth El in Charlotte and Rabbi Joe Black of Temple Emanuel in Denver have devised a wager that will see both their Reform communities donate to charity, an event they’ve dubbed “Super Mitzvah 50.”As ReformJudaism.org reported, two-thirds of the money raised in a joint online fundraiser will go to a charity chosen by the synagogue in the winning city. The other third will go to the losing city.If the Panthers win, the larger share will go to the Shalom Park Freedom School in Charlotte, which offers summer programs to low-income children. If the Broncos win, the larger share will go to Denver’s Jewish Family Service, which provides meals to families in need. As of Friday afternoon, the synagogues had raised more $5,000.Schindler makes a convincingly funny case in a promotional video that the Panthers are “God’s chosen team.” “The South is the Bible belt,” she quips, “and Carolina is the buckle of the Bible belt.”Plus, she notes, the team’s star quarterback Cam Newton recently named his son Chosen — bringing to mind the phrase “the chosen people.”Furthermore, Schindler adds, if the Panthers win the Super Bowl, their overall record (including regular and postseason games) will be 18-1. Of course, 18 means “life” and “good luck” in the Jewish tradition. And this can’t be coincidence, right?We think Schindler may be onto something: On Monday, Newton said at a press that his 1-month-old baby isalready walking — which strongly suggests the child has superhuman powers.Then again — and Schindler conveniently doesn’t mention this — legendary Broncos quarterback Peyton Manning wears the number 18 on his jersey. That has to count for something, right? (To be fair: The Denver congregation’s video, “Broncos vs. Kitty Cats,” also fails to note this stroke of “luck.”)So which team is really the chosen one? Tune into CBS at 6:30 on Sunday to find out. Either way, though, no matter who wins, Jews in need will have something to celebrate.