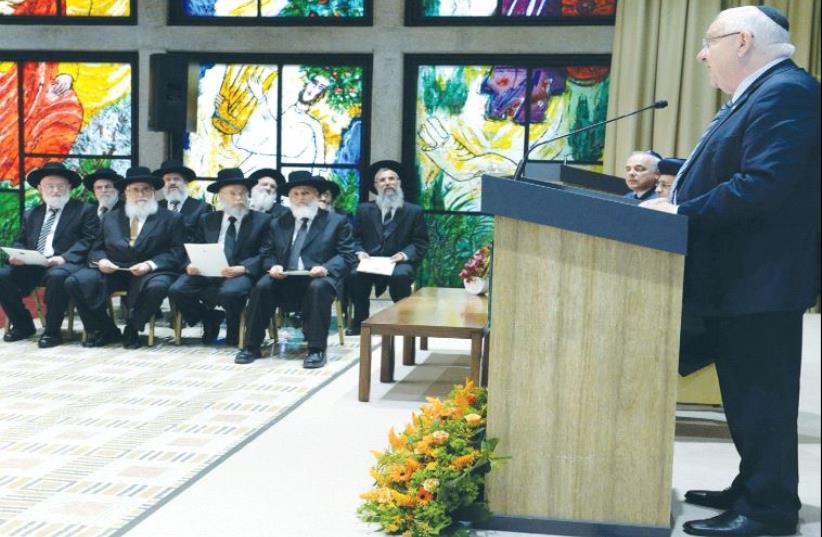 PRESIDENT REUVEN RIVLIN addresses the new members of the Supreme Rabbinical Court yesterday during their investiture at the President’s Residence in Jerusalem.
(photo credit: MARK NEYMAN / GPO)
Advertisement
In a highly unusual move, there was gender segregation at the President’s Residence on Sunday as bewigged, behatted and bescarved women sat on one side of the heavily crowded reception hall, and men in dark suits or white shirts with dark pants sat on the other. The occasion was the investiture of nine new judges of the Supreme Rabbinical Court, whose appointments were announced slightly less than three weeks ago.The new dayanim, as they are called in rabbinical courts, are rabbis Yitzhak Elmaliach, Eliyahu Raphael Hisrik, Yaakov Zamir, Aharon Katz, Zion Luz-Illouz, Maimon Nahari, Michael Amos, Avraham Schindler and Shlomo Shapira.A 10th judge, Rabbi Eliezer Igra, was appointed at the beginning of May.Only two women sat in the men’s section: Rivka Ravitz, the president’s haredi bureau chief, and Justice Minister Ayelet Shaked, who is secular. Shaked is one of the members of the appointments committee for rabbinical judges.Addressing the new judges and assembled dignitaries, Sephardi Chief Rabbi Yitzhak Yosef aimed a significant portion of his speech to members of the appointments committee, saying that when choosing new judges, they should rely on the opinions of committee members who are rabbis.There is a maximum of 12 members on the committee, including the two chief rabbis, and two judges from the Supreme Rabbinical Court.“I think that the rest of the committee members need to very much take into consideration the opinion of the rabbis on the committee,” said Yosef, saying the rabbis “are the ones who understand the Torah” and are less likely to be swayed by political pressure.The recent rabbinical judge appointment process was beset by intense political wrangling, with Yosef himself vetoing candidates because they were not Sephardi. In addition, Zamir, one of the new appointees, is a close friend and study partner of Yosef, while the children of another new appointee, Nahari, and Shas MK Yoav Ben-Tzur are married.Appointments committee member Dr. Rachel Levmore, a rabbinical courts advocate and expert in the Jewish laws pertaining to halachic prenuptial agreements, said she was shocked by Yosef’s comments and argued that judges had no authority if they were essentially self-appointed and not accepted by the people.“The instructions that Chief Rabbi Yitzhak Yosef gave to committee members in his speech were shocking and indicative of the manner in which he thinks a state institution should function – not in a democratic manner, but rather in a way to ensure that power should be solely in the hands of the rabbis,” Levmore said.The chairman of the appointments committee, National Infrastructure, Energy and Water Minister Yuval Steinitz (Likud), conceded that there had been many political and other pressures coupled with requests to delay the appointments, saying that after “a drought” of nine years without a single appointment being made, it was imperative not to yield to pressure, but to forge ahead.The main challenge, Steinitz continued, was to find balance. He did not specifically mention whether this balance should be between Sephardim and Ashkenazim or between haredim and religious Zionists, but later in his address he said he hoped that future differences would be eliminated and that everyone would bear in mind “that we are all one people.”The committee had initially been tasked to appoint six rabbis, and only in the eleventh hour, Steinitz was notified by its legal adviser that he had the right to make three additional appointments.The Finance Ministry agreed to a request for additional slots, which he said helped resolve disputes within the committee.Steinitz added that he intended to submit a bill to the Knesset for increased slots in regional rabbinical courts as well.Rivlin, Yosef and Ashkenazi Chief Rabbi David Lau each alluded to the fact that the ceremony was taking place during the three-week period of mourning between the anniversary of the breach of the walls of Jerusalem and the destruction of the Temple, which is generally a period of contemplation about how to treat one’s fellow human beings.One of the first things Yosef asked the rabbinical judges to do was pay more attention to and speed up the cases of agunot, women seeking a religious divorce but anchored in bondage because their husbands refused to give them one.Emphasizing the importance of Halacha, Lau declared that equal consideration must be given to human dignity because so many people were coming from places where they had experienced great hardship.The higher the status of a person, such as a judge on the Supreme Rabbinical Council, he said, the deeper the person has to go in alleviating the distress of those who need his help.