The “The Unattainable Meal," exhibit will be visible from September 18 to 24th to symbolize some 200,000 families who are unable to afford meals on a regular basis. 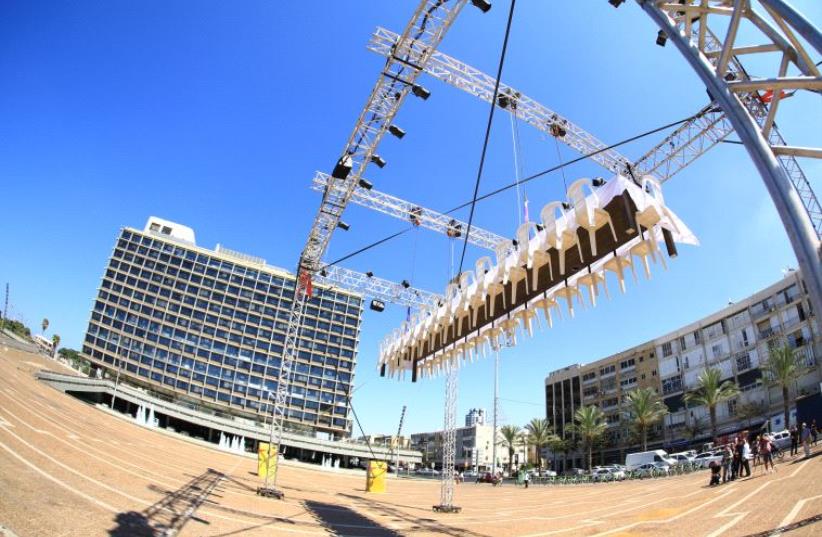 Latet's 'Unattainable Meal' exhibit in Rabin Square in Tel Aviv
(photo credit: SHLOMI MIZRAHI)
Advertisement
Approximately 20% of Israelis say they have worried about providing food for their families due to financial duress, according to a survey by humanitarian-aid organization Latet.The study was released Sunday as part of the launch of the organization’s new campaign, “Giving for the holidays” (a play on words, as Latet is both the name of the organization and means “to give” in Hebrew), in which it also unveiled a large table suspended in the air in Tel Aviv’s Rabin Square.The exhibit, entitled “The Unattainable Meal” which can be seen from September 18 to 24, serves as a symbol of the some 200,000 families who are unable to afford holiday meals, or even meals on a regular basis.The campaign aims to enlist the general public ahead of Rosh Hashana to help change this reality by encouraging volunteering and donations, as well as pressuring the government to take responsibility and formulate and allocate funds for a national effort to combat food insecurity.According to the findings of the survey, which will be released in full in the organization’s annual Alternative Poverty report later this year, nearly 20% of those polled reported that they had not eaten balanced meals this past year due to financial hardships.Additionally, approximately 18% said they worried that the food in their home would be finished before they had money to buy more, while 14% said they had purchased insufficient amounts of food but had no money to buy more.“Unfortunately, even after a decade of activity with different agencies in the Israeli government – in an effort to require them to adopt a government plan to reduce poverty – there are still hundreds of thousands of families with food insecurity living in Israel, without any adequate and worthy government response that addresses their situation,” Latet Executive Director Eran Weintraub said on Sunday.The survey further found that some 78% of respondents believe the government is the main entity responsible for reducing poverty – an increase of 12% from the previous year.Nevertheless, two thirds said they believe combating poverty is low on the list of – or not even on – the government’s national agenda.Furthermore, respondents gave a “failing grade” to Prime Minister Benjamin Netanyahu, Finance Minister Moshe Kahlon, and Labor and Social Services Minister Haim Katz, assigning them respective scores of 2.9, 4.4 and 3.9 out of a possible 10 in dealing with the poverty issue.Weintraub said that the government would need to allocate NIS 1.5 billion per year in order to address food insecurity for the estimated 243,0000 families that require assistance, but had allocated funds to assist roughly 1% of the need.He called on the Labor and Social Services Ministry to “take full responsibility” and change the government’s policies regarding food insecurity and poverty, and allocate NIS 300 million from the 2017/18 budget to establish a national effort to ensure food security.The survey was conducted among 500 respondents by Rotem AR research institute at the beginning of September, with a margin of error of +/-4.5%.Senior officials in the Welfare and Social Services Ministry expressed doubt as to the legitimacy of the findings.“We are skeptical of the credibility of Latet’s announcement and the reliability of the survey,” they said in a statement.“This is a charity that is full of financial interests, some of which are not related to the desire to help families in need.”In response, Weintraub invited the labor and social services minister to hold a public forum to outline his policies to reduce food insecurity and poverty.As part of its campaign, Latet will again hold its annual food drive and provide holiday meals for some 1,000 needy Holocaust survivors.