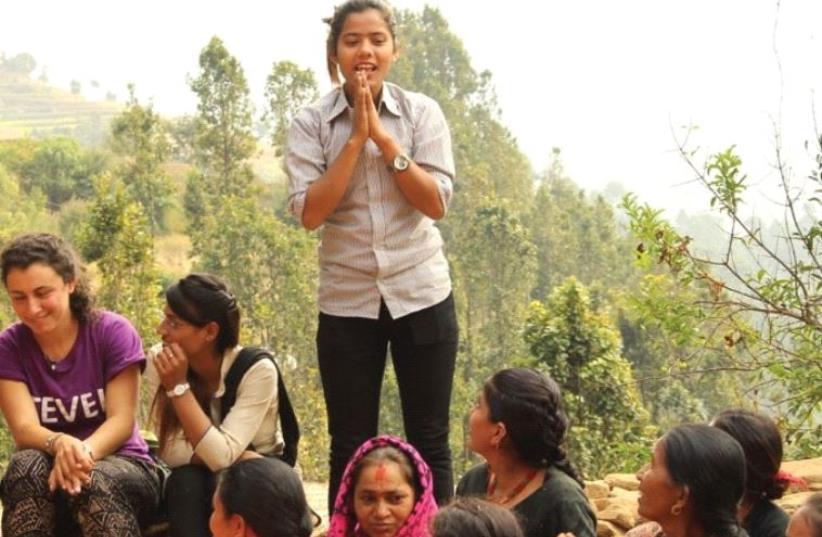 Israeli volunteers in Nepal train the local population to help improve conditions such as health and education
(photo credit: COURTESY TEVEL B’TZEDEK)
Advertisement
When journalist Rabbi Micha Odenheimer was in Nepal in 2005, he met many Israelis on what is known as The Hummus Trail – the trip to Nepal and Kathmandu that has become a rite of passage for many post-army Israelis. Odenheimer saw that many of these young people were keenly aware of the poverty and miserable conditions of the Nepalese and wanted to help, but there was no framework for them to do so.Odenheimer’s dream was to set up a framework that would bring Israelis and Jews from all over the world to Nepal to be involved in tikkun olam. As a religious Jew, he could not accept that there were millions of people living in abject poverty without enough food, clean water, basic housing and education, while others who had plenty of everything were doing nothing to help. The Jewish concept of tikkun olam, he believes, means it is our duty to help these impoverished nations.

Setting up a model project In 2007, Odenheimer set up Tevel b’Tzedek (“the world with righteousness” – a quotation from Psalm 98).Elana Kaminka, associate director of Tevel b’Tzedek, says that Odenheimer knew it would be a mistake to try to impose anything on the Nepalese.Their experience, expertise and knowledge would provide the stability for any project to succeed.To that end, Odenheimer set up a model project that employed 60 Nepalese people to remain at the center of the project and be trained by Israeli teams of experts in agriculture, water conservation, early education and empowerment of women. These are joined by changing groups of international volunteers working under these local people and bringing with them youth, strength, enthusiasm, skills and ideas that can be implemented as part of the project.VolunteersThe Tevel b’Tzedek volunteers can go to Nepal for a minimum of one month.During their stay, they live with local families and experience firsthand the very conditions they have gone to improve.It’s also possible to go for a seven- month fellowship. Those volunteers are paired with local people with the same skills but are familiar with the language and culture of the villages.Together, these teams can make a big impact on improving the life, education and health conditions of the villagers.For those who stay for longer, there is The Big House, as Tevel’s headquarters are known, where volunteers can chill out and enjoy some of the modern amenities they are used to, such as running hot water, Wi-Fi, a library and a beit midrash (study hall).A devastating earthquake hit Nepal in 2015 and killed and injured thousands of people and laid waste to most of the homes and projects that Tevel b’Tzedek had built with and for the local population.Disaster relief may not have been part of the intended project, but it was fortunate that Tevel b’Tzedek was there, ready to coordinate the Israeli search and rescue operations and the medical teams that soon arrived.It will take some time, but the Tevel b’Tzedek teams are determined to stay and rebuild what has been destroyed and continue to provide help and stability to the population in Nepal.