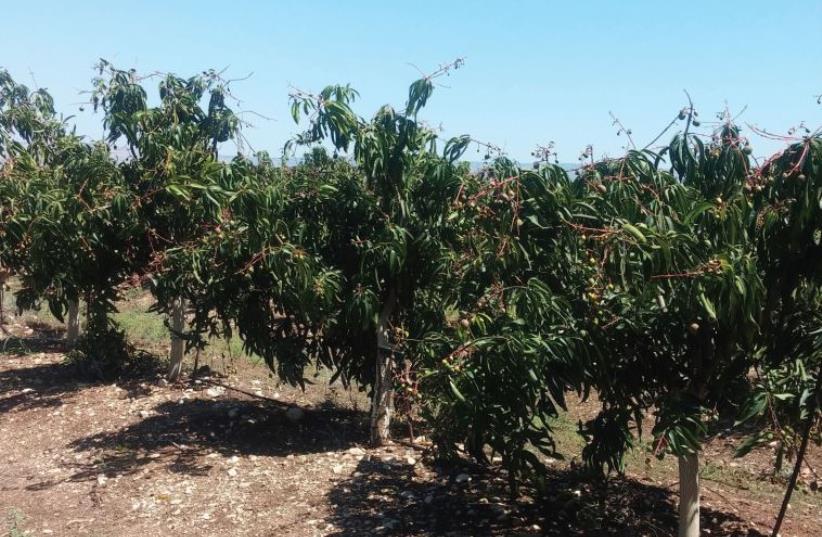 The 100-year-old mango grove
(photo credit: DAVID BRINN)
Advertisement
I was never really aware of my grandfather’s adventures as a young Zionist pioneer in the early 20th century. By the time I knew Myer Brinn, he had long been established as a bon vivant in Portland, Maine. His death while on a visit to Tel Aviv in 1973, provided the bookend to his lifelong flirtation with Israel, which included a stint (1935-39) living in Mandate-administered Palestine with his family, including my teenaged father and his two sisters.But it was on Myer’s first voyage from his home in Lithuania to the Holy Land in 1918, along with his new bride Dina, that he had the foresight – or lack of thought – to purchase 882 sq.m. of land from the fledgling Jewish National Fund, located somewhere just north of Tiberias near the Kinneret.By 1921, with their first child, my aunt Ann, born in Jaffa, Myer and Dina left Palestine to join relatives in Maine. I don’t know if he ever returned to his plot of land when he and the family made aliya in 1935. But by 1939, with the British Army conscripting young, able-bodied males, my father fled back to the US, followed by the rest of the family. The Brinns never left Maine again.Fast forward to the mid-1990s when my father’s younger sister, Dorothy, came to Israel for a visit a few years after my wife and I had followed the family tradition and made aliya. She and her husband, Yaakov, already in their 70s and unsteady on their feet, handed me an envelope explaining that it contained the deed to the land (close to Migdal) purchased by my grandfather in 1918. In a bid to claim the land, they had met with a few lawyers and government officials, but had quickly tired of Israeli bureaucracy.“If you can get the deed switched to your name, then the land is yours,” said Dorothy.The deed sat in a drawer for some months before I brought it to a local lawyer who had handled our last home purchase. After inspecting the document and talking to some colleagues, Gabe answered that he thought it was worth taking on the project, whereupon we forged a partnership. The entire process would take a year or two, he surmised, to prove that my grandfather was the same Myer Brinn who had purchased the land in 1918.Well, the whole process was closer to 16 years, but last month we finally got the deed transferred to our names and registered with the Israel Lands Authority.During the painstaking process – involving affidavits, death certificates, succession orders, and documents notarized in the US and by Israeli consulates (and by every place in between) – we learned of the exact location of the land. It was part of a mango grove (two and a half acres in total) just off Highway 90 in the shadow of Mount Arbel. We had known for some time that the land was zoned for agriculture, and not for residential purposes.Therefore, the financial incentive was no longer important. Now, we only hoped to reclaim the land that my grandfather had – for reasons unknown – purchased nearly 100 years before.During Passover, armed with a Google Maps printout detailing the plots in the grove and surroundings, we arrived in the flatland between Mount Arbel and Migdal. The land contained fruit trees, a small forest and some barren areas. We parked the car where we estimated the plot was (real life doesn’t number plots as nicely as Google Maps) and muddled around. The closest building was about half a kilometer away, as was the nearest paved road. We wandered around, thinking: Is this the spot? Or is it that one? Suddenly, as in the movies, a white car turned down our path and barreled toward us. The driver, a middle-aged man, along with his young daughter, stopped the car when he got to us. Before he could say anything or yell at us for intruding, I quickly presented him with the map printout and asked him if he knew the plot numbers in the area and could direct us to the one circled on the map.“Sure, that’s in the mango grove I take care of with my brother,” said the man, who introduced himself as Ofer. “It’s just south of here, you drove down one dirt road too much.”I told him about the deed and my new ownership of a plot within the mango grove.Rather than yelling “get out of here,” he offered a “mazal tov” and offered his phone number. “Hag sameah,” he said as he drove away, the dust blowing under his wheels.We backtracked according Ofer’s instructions and found the mango grove using the map’s estimations. We finally located our plot. The requisite photos of it were taken and sent to its other owners across the world.We don’t know what’s going to happen when my lawyer calls up Ofer to talk “tachlis” (a term Israelis use meaning “get to the point.”) All options are on the table: Ofer can buy the land outright, pay us rent, or provide us with a lifetime supply of mangoes. Or he could tell us to “get out of here.”But, the critical accomplishment has already been achieved. Sixty-eight years after Israel came into existence, Myer Brinn’s land is thriving.If we need to wait a little longer to get to the end of the story, that’s OK. We’re in no hurry. The first part of it has taken nearly 100 years, and it doesn’t look like the Brinns, or Israel, are going anywhere else.