The laws and politics of declaring NGOs terrorist groups - analysis

Defense Minister Benny Gantz’s declaration that six Palestinian NGOs deeply involved in the human-rights movement and with UN groups are terrorist organizations left in its wake shock, jubilation and furor, depending on your politics.

Lost amid the latest verbal disputes within the government and between ministers and the US about whether everyone who should have been given a heads-up received one is the complex mix of law and politics involved in the issue.

Some mixing of law and politics is unavoidable in human affairs and is sometimes even more pronounced in aspects of the Israeli-Palestinian conflict, where the law is often developed to support larger long-term diplomatic goals.

So this mix is not necessarily inherently undemocratic.

The real question is fairness more than it is pristine philosophical objectivity. 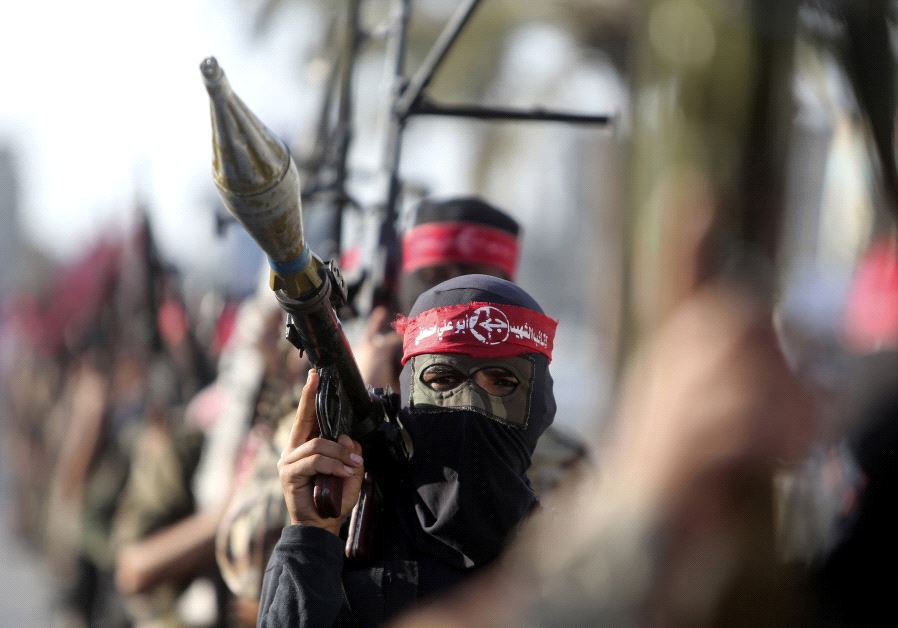 Palestinian members of the Popular Front for the Liberation of Palestine (PFLP) take part in a military show in Gaza (credit: REUTERS)

According to the Defense Ministry, the Shin Bet (Israel Security Agency) investigated the organizations between March and May and found that they had raised and laundered money, as well as forged documents to assist the Popular Front for the Liberation of Palestine (PFLP), recruited activists to join the group and witnessed several meetings of senior group members, including individuals convicted of terrorism, at the offices belonging to the six NGOs.

“These organizations who belong to the Popular Front are connected to each other and constitute the lifeblood of the organization, economically and organizationally,” the source said.

Up until this point, the ministry basically has not said anyone in these groups had committed an act of violence.

Rather, the ministry has said they are part of the PFLP’s broader ecosystem of fundraising, recruiting and logistical support.

Until 2016, such accusations could lead to some limited charges. But in 2016, Israel passed a broad anti-terrorism law to help combat the “Knife Intifada” and evolving trends in terrorist groups’ fundraising tactics.

Probably the weakest legal charge, but one that has a powerful moral hold on Israelis and some global observers, is the allegation that these groups have been diverting donations to stipends for the families of deceased Palestinian terrorists, as well as the promotion of terrorism and violent ideologies.

Very few specific allegations were made public, but they included that Samir Arbid, Razak Praj and Ataraf Rimawi are PFLP operatives on trial for murdering 17-year-old Rina Schnerb in August 2019 with a bomb and that they are connected to at least two of the six groups

Regarding terrorist financing, the statement noted the Shin Bet’s arrest of four Palestinians in May for diverting European humanitarian aid through NGOs to the PFLP.

THERE ARE also reports that at least one and probably some other specific defendants had incriminated the full range of six groups as being money-laundering and recruiting fronts for the PFLP.

But declaring six NGOS terrorist organizations– some of which have decades-long relationships with the UN, the global human-rights community and Western countries – was a radical move.

Such a radical move requires presenting far more specific evidence, including meticulous graphics mapping out specific individuals and their links to each of the six groups.

There also needs to be sufficient evidence that the groups themselves were all helping the PFLP, as opposed to the Shin Bet having caught a few bad apples and having evidence of a few bad meetings or associations.

District Judge Khaled Kabub, who is still on the shortlist for filling a Supreme Court vacancy, recently had some questionable meetings. But so far, he is still in the running, having explained the complex circumstances.

A famous case of administrative detention illustrates how politics could invade law in a way that raises serious questions.

On May 24, 2007, Wajia Nazal was placed in administrative detention. His detention was extended multiple times until September 2008, without much excitement.

Eventually, the IDF West Bank court put pressure on the IDF prosecution to produce new and updated intelligence about the danger presented by Nazal.

Instead, the IDF prosecution offered Nazal his release in exchange for both a signed commitment to refrain from terrorism as well as to resign from the Kalkilya City Council.

Then-IDF West Bank chief prosecutor Lt.-Col. Maurice Hirsch said the offer had been appropriate because Nazal was a member of Hamas, which was trying to take over the Kalkilya City Council.

But many critics said the IDF was wrong to condition a release from administrative detention – a kind of detention reserved for the most dangerous individuals – on resigning a political post.

This same awkward mix of law and politics can creep into IDF West Bank court charges relating to protesting and disturbing public order if the background to the dispute is the broader Israeli-Palestinian conflict over land rights.

THIS BRINGS us to timing and motivation.

Charges against at least some of these groups date back several years, so why go after them now?

While Gantz has not answered these questions, the decision was rolled out at almost the same time as decisions to approve new Jewish and Palestinian building in the West Bank and to approve letting more Palestinian workers into Israel after Gantz’s recent meeting with Palestinian Authority President Mahmoud Abbas.

Exactly what Gantz wants out of all of these actions is not clear. But there appears to be some intended method to the madness that is connected to politics as much as to policy and law.

If the West does not accept the terrorist declarations, it also will not accept future criminal proceedings against many of the NGOs’ personnel and may ignore Israeli calls to cease dealings with the groups.

Will Israel bring charges against European government officials for continuing to fund such groups?

Significantly, more specific evidence to connect the dots will need to be produced if Gantz wants to avoid some of the worst fallout from Friday’s decision.