The man who made it happen

EMET Prize a result of Arie Dubson’s efforts to honor his father, AMN Foundation founder Alberto Moscana and the State of Israel. 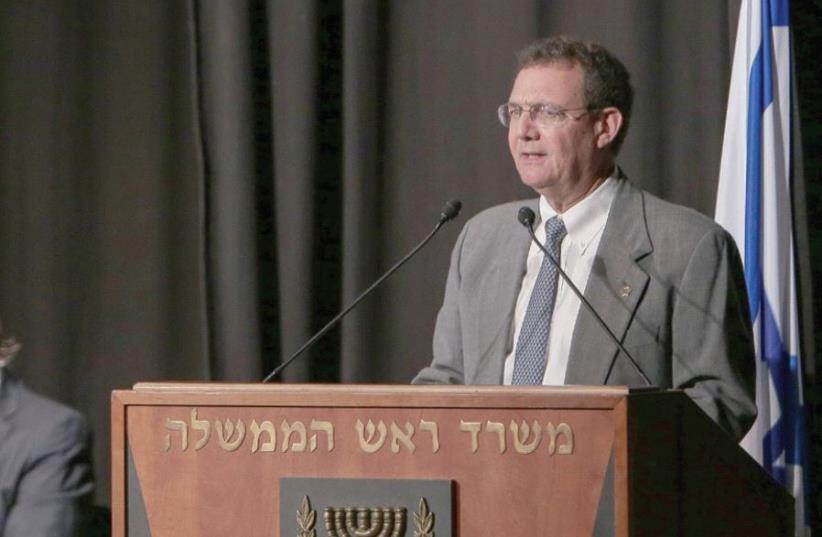 THE EMET PRIZE’S Arie Dubson speaks at the organization’s prize ceremony.
(photo credit: KOBI KALMANOVITZ AND DUDI SALEM)
Advertisement
In some ways Arie Dubson is a walking personification of the EMET Prize.As someone with a master’s degree in business administration, a bachelor’s in mathematics and physics and who is a student of philosophy and music, Dubson is able to deeply appreciate almost every category of the prize.Since 2003, the EMET is given out annually by the prime minister to award Israeli citizens who are pioneers in their fields of study.But the story of how the prize came to be goes beyond the glitzy ceremony.It began as the far-away dream of two Mexican Zionists – Alberto Moscona, the founder of the AMN Foundation, which distributes the prize, and Sol Dubson, Arie’s father – who wanted Israel to have its own version of a Nobel Prize.Growing up, Moscona was transfixed by the Nobel Prize and wondered why more Israelis were not let into that exclusive club.Dubson is not sure where his affinity for the Nobel Prize stemmed from, but speculates that his lack of a formal education may have fueled his desire to award excellence for those who pour themselves into their studies.“Unlike other prestigious prizes in Israel, this prize is exclusively for Israelis,” Dubson notes.Thus, an agreement between Moscona and the elder Dubson was formed – Moscona would front the money to be awarded to the recipients and Dubson’s family would be responsible for any of the prize’s overhead fees.“Alberto was involved in the prize in the sense he allocated the capital, and it was his vision. But, from day one, I made it happen,” says Dubson.“When Alberto had the idea of making a Nobel Prize for Israelis, he came to me and said, ‘I want to do this, what can we do?’ And then I went to work,” Dubson recalls.Although the EMET Prize is now celebrating its 15th year, the path to creating it wasn’t smooth.In search for a government seal of approval, the idea for the prize was initially presented to the president at the time, Ezer Weizman, who did not understand its purpose.Then, Dubson and Moscana approached Benjamin Netanyahu during his first stint as prime minister, and he approved the idea. The government changed hands, however, and Ehud Barak became prime minister. He signed the agreement, but the first prize was awarded only by Ariel Sharon after much hand-wringing and ultimatums.Dubson, the founder of Voyage Capital Partners – a hedge fund management company – says his work at the EMET prize is his way of giving back to Israel.“I always felt it was not enough for me to live in Israel – I wanted to contribute beyond paying taxes. When [Alberto] said he had the idea of the prize, I saw it as a way to do that.“This was my way of giving back. It rewards excellence. The EMET Prize is the Zionist element of my life and Voyage Capital feeds me and pays the EMET prize bills,” he smiles.The prize holds a special significance for Dubson, who made aliya from Mexico in 1980.“The EMET prize makes me feel like I’m part of something larger than myself, it gives me a sense of belonging. It belongs to me and I belong to it. It goes both ways,” he said, explaining that this is his way of being fully enmeshed in the Zionist enterprise.Fulfilling his father’s commitment to absorb the cost of the Prize is also a way to remain firmly connected to his father’s legacy.“It’s a big source of pride to see so many Israelis doing great things that impact the world. He was glad to be a part of that, and me, too,” he explains.Dubson brushes off notions of tikkun olam – healing the world. Rather, he believes recognizing and paying tribute to extraordinary work is an internal drive prevalent among the Jewish people.“I don’t believe in tikkun olam. We have a tradition of studying and excellence; we needed it to survive. This is an internal drive for us,” he asserts.Whether the needs are external or internal, EMET has spent the past 15 years awarding the best of the best in Israel and hopes to do so for years to come.

This article was written in cooperation with the EMET Prize.
Advertisement
Subscribe for our daily newsletter