Designed to offer high-speed interception along coastlines, the boats have been deployed by coast guards across the world. 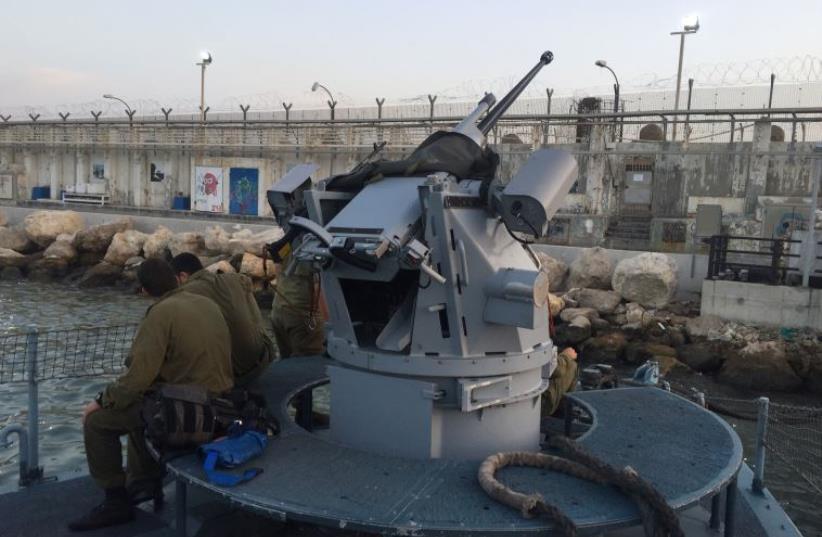 The 12-man crew of the Israel Shipyards built-Shaldag boat often live aboard their ship for up to four days while on patrol.
(photo credit: SETH J. FRANTZMAN)
Advertisement
The Philippine Navy is pushing ahead to acquire eight Shaldag-class patrol boats to replace its medium-sized patrol craft that have been in use since the mid-1990s.The boats, built by Israel Shipyards, are designed to offer immediate responses and high-speed interception. They have been deployed by coast guards throughout the world.They can support a range of missions, including maritime patrol, prevention and interception of terrorist or drug activities and search-and-rescue operations.Designed to carry 10 to 14 crew on board, it can carry optional payloads and be armed with a Typhoon automatic gun, two Mini-Typhoon heavy machine guns and eight short-range anti-ship missiles.Four of the eight ships will be armed with non-light-of-sight (NLOS) missiles that have a range of 25 km., while the other four will have machine guns and light automatic cannons, the Philippine News Agency reported.Former Philippine Navy vice admiral Robert Empedrad said the Shaldag-class patrol boats would be used for maritime interdiction operations, according to the report.Former Navy spokesman Capt. Jonathan Zata was quoted as saying the ships would have the capability to defend key sea lines of communication (SLOCs), such as Mindoro, Balabac, Sibutu and the Basilan Straits, against conventional threats, the report said.Four of the Shaldag-class patrol boats will be built in Israel, while the other four will be built at the Philippine Navy Cavite Naval Yard.The project has been approved by Filipino President Rodrigo Duterte as part of the second phase (Horizon 2) of the Revised Armed Forces of the Philippines Modernization Program, which has a budget of PHP 10 billion ($203 million).There have been concerns about human-rights abuses by Duterte’s government over the years. But Israel and the Philippines maintain close security ties, with Jerusalem having sold a large amount of weaponry to the Philippine Army over the years.Duterte has said he considers Israel to be an alternative supplier of weapons. During a 2018 visit, he told President Reuven Rivlin he intended to buy military equipment exclusively from Israel because of the country’s lack of restrictions, unlike the United States and other countries that have refused to sell him arms over human-rights violations.Last July, a 10-man strong IDF delegation led by Brig.-Gen. Dan Goldfus, then commander of the Nahal Brigade, spent two weeks training 175 officers from the Philippine military’s elite units in counterterrorism methods.The IDF trained Special Forces, First Scout Rangers and Light Reaction regiments, as well as troops from the 2nd, 5th, 7th and 9th Infantry divisions. The training was part of a program to hone and improve anti-terrorism skills, Philippine Army chief Lt.-Gen. Macairog Alberto was quoted by local media as saying at the time.