Police released the identity of the man suspected of decapitating his ex-wife and carrying her head down the street. 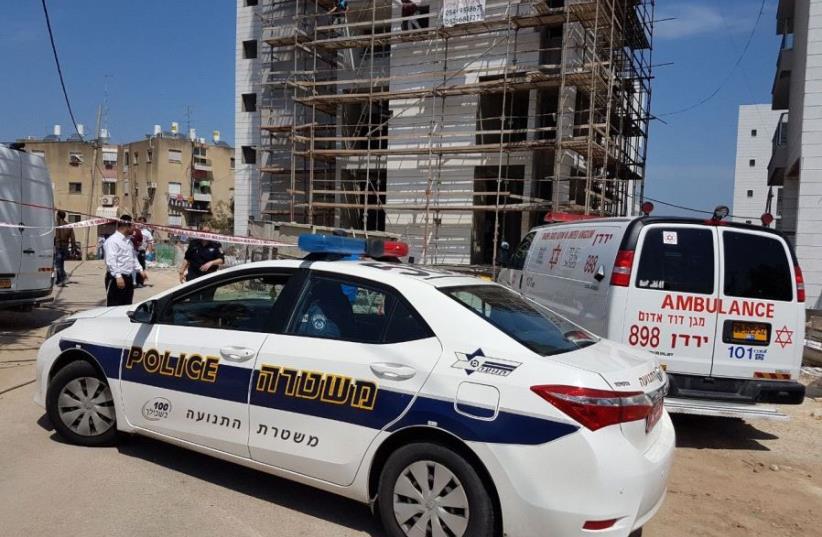 The scene of the crime in Tiberias
(photo credit: MDA)
Advertisement
Meir Efraim Goldstein, 34, was named on Thursday as the murder suspect who allegedly decapitated his ex-wife, Adele Goldstein, 33, and burned the body. Goldstein was brought to the Nazareth Magistrate’s Court on Thursday where his remand was extended until April 13, and a psychiatric evaluation was ordered on the suspect.On Wednesday, Goldstein was arrested by police after residents saw him walking on Nachmani Street in Tiberias covered in blood and allegedly carrying his wife’s head.Police found the victim, burned and headless, in an apartment engulfed in flames on the city’s Nachmani Street.Attorney Efraim Dimri, who represents Goldstein, told press before the remand hearing on Thursday that the suspect said a “divine spirit” commanded him to kill his wife and that the same “spirit” commanded him to only reveal his motivations in eight days, once a “miracle is revealed.” Dimri said that the suspect does not appear fully aware of his actions and needs a “deep psychiatric evaluation.”According to Dimri, Goldstein was recently taken by a rabbi to see a psychiatrist, who gave him medication. Goldstein, who was recently divorced by the victim, immigrated to Israel from Moldova in 1991. The couple had no children. At approximately noon on Wednesday, the police were notified about an apartment fire and alerted to an ultra-Orthodox man walking in the streets with his clothes stained with blood. The man was arrested shortly after police arrived.An eyewitness told The Jerusalem Post’s sister publication Maariv that “a young ultra-Orthodox man was walking around the street with his wife’s head in his hands, covered in blood.""No one understood what was going on and why he had so much blood on him," the unnamed eyewitness said. "Only later did they realize he was holding the woman’s head.”Joint List MK Aida Touma-Sliman, head of the Knesset Committee on the Status of Women and Gender Equality, responded to the killing by saying the lack of a “national plan” to deal with the murder of women meant that “women continue to pay the price with their blood and their lives.”This comes amid a recent spate of domestic murders that have made headlines in the Israel. In one case, Nadav Sela was suspected of murdering his wife, two sons and another person in the northern town of Migdal late in January. Sela was indicted in March and has admitted to the crimes in court.In another incident, women’s rights activist Siham Zabaraja was shot in her home in Lod on Sunday and died of her wounds on Tuesday. A gag order was issued on details of the investigation