IDF source: "Our wish is to fulfill the wants of Druse youths, who clearly want to integrate into the wider IDF, and not be in their own battalion," 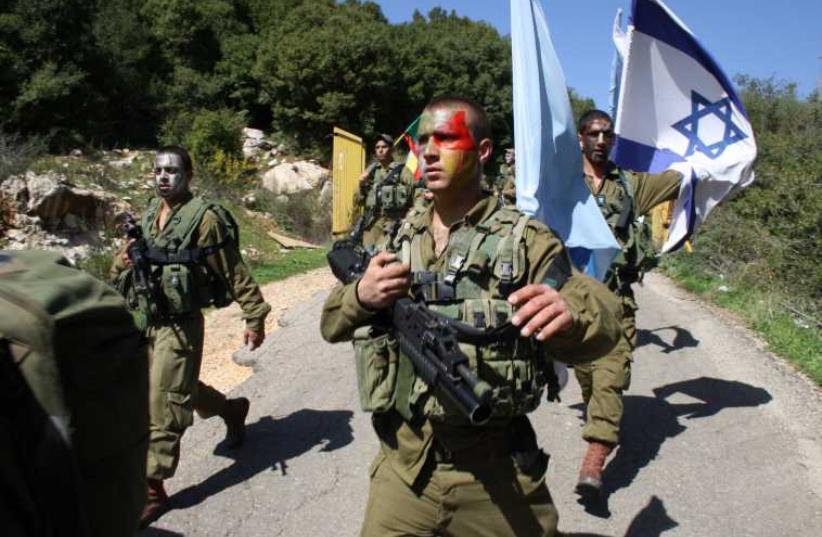 Herev Battalion
(photo credit: IDF)
Advertisement
The IDF on Monday shut down the Druse 299 Sword infantry battalion, saying the move was a reflection of the desire of Druse conscripts to join the wider IDF.A military source said the decision was taken by Chief of Staff Lt.-Gen. Gadi Eisenkot following consultations with the heads of the Druse community and former battalion commanders.“Our wish is to fulfill the wants of Druse youths, who clearly want to integrate into the wider IDF and not be in their own battalion,” the source said. He paid tribute to the battalion’s “magnificent” combat legacy, adding that a commemoration site for its casualties would be set up.“Druse youths eligible for conscription mainly want to join combat units, in addition to intelligence, communications and combat support units,” the source said. “Ninety-nine percent of conscripts surveyed said they wanted to join the wider IDF.”The Druse community has traditionally played key roles in the IDF. Today, 80% of its pre-draft-age youths say they wish to join the IDF, compared to 75% of Jewish youths.The source described that figure as a “certificate of honor” for the Druse community.“We want to ensure that the soldiers receive what they want,” the source said.The coming July draft cycle will see an end to the 299 Battalion being offered to recruits as an option. By September, the unit, which serves under the Northern Command, will be disbanded.All of the unit’s career officers and non-commissioned officers will be moved to new units, the source stressed.“No one will be fired,” he added. “This will strengthen the IDF. It will hasten integration, and we will see the effect this will have on Israeli society in a few years. More people will know the Druse community.”The Northern Command will receive substitute operational forces, the source said.Currently, the 299 Battalion has 400 Druse soldiers out of a total of 2,300 serving in the IDF. Of these, 1,500 are career officers or NCOs.“There is already a trend among many Druse youths who say they wish to attend non-sectoral high schools and integrate. The fact is that they want the same in the army,” said the source.“We must listen to this.”The Sword Battalion’s origins go back to the 1948 War of Independence, when the Druse joined battles against invading Arab League armies, forming a Minorities Company in the nascent IDF.The company evolved into a battalion in the 1950s, when the government extended the mandatory national draft to the country’s Druse community.In the 1970s, Druse soldiers began joining all army units, a process that today sees them integrated in and commanding vital military forces. The appointment of Col. Rasan Alian to head the Golani Brigade is a prominent example.