Worries over 'slippery slope' in congressional use of Budget Control Act loophole. 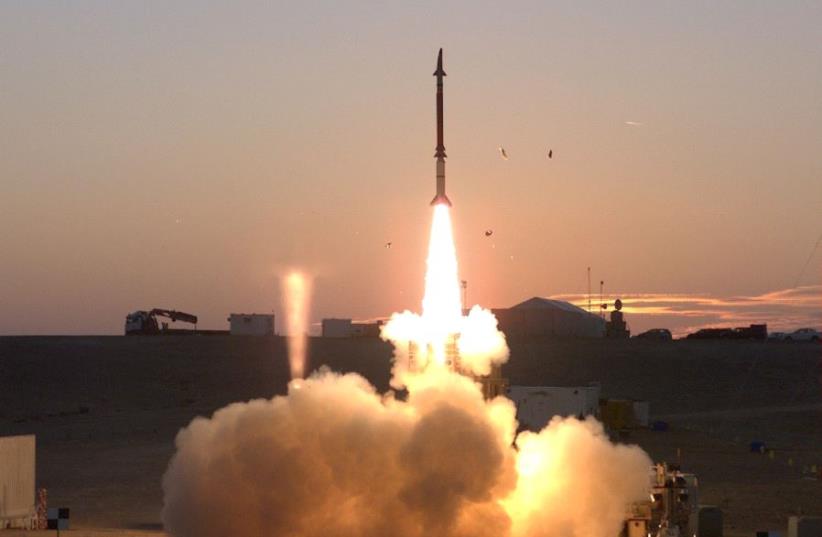 The David's Sling interceptor
(photo credit: IDF SPOKESPERSON'S UNIT)
Advertisement
WASHINGTON – The Trump administration is concerned about a House committee proposal that would siphon Israel missile defense aid from a fund that is typically reserved for current US wartime operations.The House Armed Services Committee proposed a $558 million increase in allocated Israel aid for 2018 that would come from Overseas Contingency Operations, or OCO – a fund that is effectively uncapped by the Budget Control Act, and has become a loophole through which Congress and the Pentagon get around budget cuts ever since sequestration (a legal procedure in which automatic spending cuts are triggered if the federal budget exceeds a set limit) hit defense programs hard in 2013.Now, US President Donald Trump’s National Security Council and the Office of Management and Budget are drawing a line on use of the fund – and Israeli missile defense aid is no exception.“It is a slippery slope to attach many other items onto OCO, which heretofore was focused on current operations and readiness issues,” a National Security Council spokesman told The Jerusalem Post on Thursday. “This was the first time Israeli missile defense was pinned by any congressional committee to OCO.“The objection pertained to the use of OCO, not to the proposed amount,” the official added.The White House was responding to an inquiry over its Statement of Administration Policy on the draft budget released last week, which first expressed concern over the vehicle used to deliver additional aid to Israeli programs.“The bill also proposes using OCO to fund additional end strength, ships and homeland defense,” read the statement.“Funding these enduring requirements in OCO would complicate the funding stability for associated outyear costs and runs contrary to the purpose of OCO.”The National Security Council spokesman noted that Senate Armed Services Committee members proposed a funding structure similar to those in past authorization acts, which would add funds for Israel from the Defense Department budget.The American Israel Public Affairs Committee underscored its support for an increase in Israel missile defense aid, declining to comment on the White House’s policy statement.“As we have indicated, we support the funding level of $705m.for US-Israel missile defense cooperation that has been approved by key Senate and House appropriations and authorization committees,” a spokesman for AIPA C, Marshall Wittmann, told the Post.