At the time of the attack, Suher was on vacation with his wife, Inbal, to celebrate his birthday. 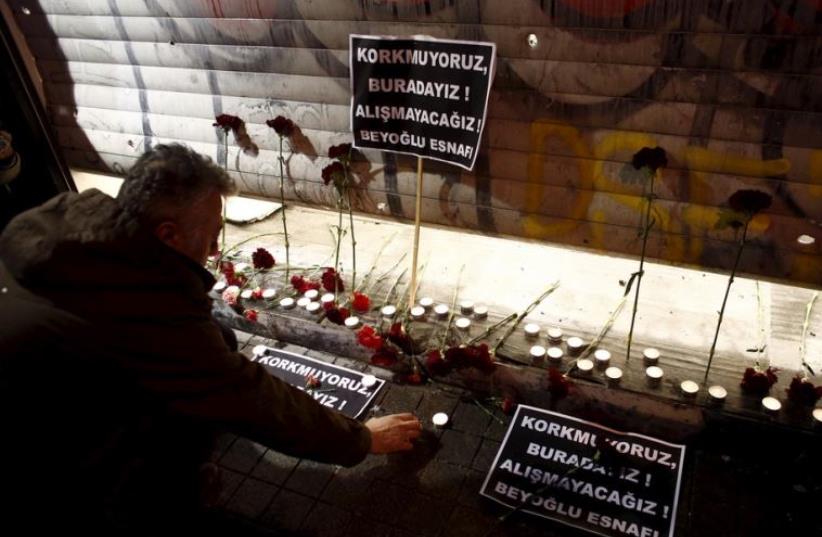 A man places carnations and a candle at the scene of a suicide bombing at Istiklal street, a major shopping and tourist district, in central Istanbul
(photo credit: REUTERS)
Advertisement
Yonatan “Yoni” Suher, 40, a married father of two from Tel Aviv, was buried Monday evening in a cemetery at Kibbutz Shiller, located in central Israel, where he was raised.Suher served in the IDF’s Military Police Corps, and received a law degree before working in the high-tech industry.At the time of the attack, Suher was on vacation with his wife, Inbal, to celebrate his birthday. Inbal, who was also wounded in the blast, underwent emergency surgery in Turkey on Saturday night.Her current condition remains unclear.Yoni spent most of his life in Israel, but according to a cousin, who requested anonymity, his American roots ran deep.Indeed, he was born in Oregon like his father Randy, who initially came to Israel in the 60s as a kibbutz volunteer, and later fell in love with a local girl named Yael, the cousin said.He and Yael eventually married and raised five children on Kvutzat Shiller, but they always stayed close to their loved ones back in the Pacific Northwest, he noted.The cousin added that Yoni and his brothers were big fans of the Seattle Seahawks and the Portland Trailblazers, and that two years ago the siblings went on a road trip across the Pacific Northwest, a classic American rite of passage that meant a great deal to them.As Americans, the family was also touched by the remarks made at the funeral by William Grant, the Deputy Chief of Mission at the US Embassy in Israel, the cousin said.