Israel Meteorological Service predicts occasional showers accompanied by isolated thunderstorms from the North to the northern Negev on Tuesday. 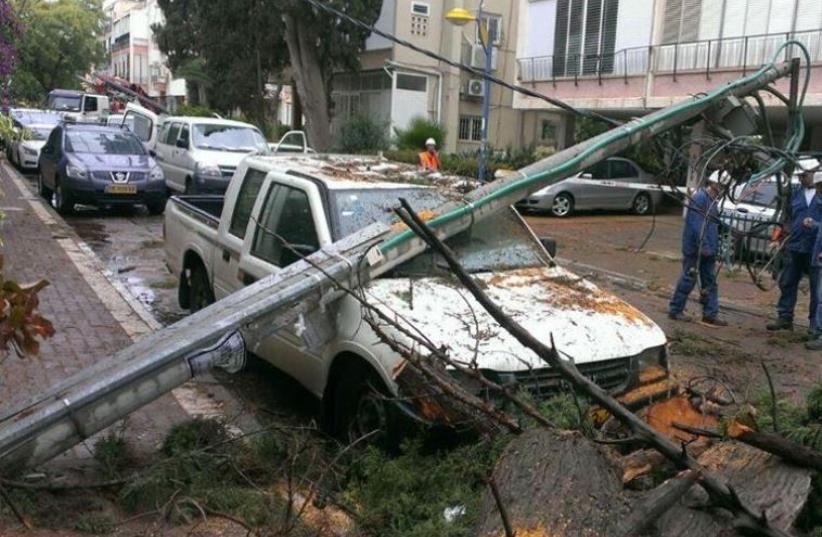 Storm downs electrical pole on a car in central Israel
(photo credit: ISRAEL ELECTRIC CORPORATION‏ FACEBOOK)
Advertisement
The number of households without electricity two days after stormy weather hit the country has gone down to 8,000, the Israel Electric Corporation said Tuesday.IEC teams worked throughout the night to fix the damage to electricity lines, especially in the Sharon region, the company noted, adding that the prior evening some 33,000 households were without power. On Tuesday morning, the CEO of the Israel Electric Company appeared before the Knesset State Control Committee and apologized to his customers who were still in the dark.  "Unfortunately, even now, thousands of customers are without power. As a provider of an essential service we apologize and we are doing everything in our power to bring the power back as soon as possible," Ofer Bloch said. Numbers of households without power dropped from about 50,000 on Monday morning to 33,000 by evening, and narrowing down from the entire Sharon region, Netanya and Petah Tikvah to primarily Ra'anana and Netanya.Although the direct cause of the mass outages may have been the brutal impact of Sunday’s unusually strong storm conditions, the electricity sector’s powers-that-be played the blame game on Monday as to who was responsible for the failure to expedite the repairs.On Sunday evening, an IEC spokeswoman said management had turned to the Labor Court after discovering that, pursuant to instructions from the IEC Workers’ Union, its employees were not working according to proper emergency procedures. IEC management argued that a failure to work comes at the expense of tens of thousands of customers. In response, the court ordered employees to follow emergency procedures and work as scheduled.In an interview on Channel 2 on Monday night, National Infrastructure, Energy and Water Minister Yuval Steinitz stressed that in such a serious situation, “there is no place or justification for games, strikes or sanctions.""You cannot run campaigns at the expense of citizens on such critical subjects," he said, noting that at the peak of the outages, some 200,000 households lacked power. The ongoing storm is the result of an upper air trough accompanied by a Red Sea trough in its lower levels, Dr. Amos Porat, head of the Climate Department at the Israel Meteorological Service, explained on Sunday. A meteorological trough is an elongated region that features low atmospheric pressure, as opposed to a ridge, which features high atmospheric pressure.For Tuesday, the IMS predicted occasional showers accompanied by isolated thunderstorms from the North to the northern Negev, with a slight drop in temperatures and a risk of flash floods in the eastern and southern wadis.The IMS maintained similar forecasts for Wednesday and Thursday – occasional showers with isolated thunderstorms once again in the same regions, with the same flash flood warnings and unseasonable cool.By Friday, the IMS forecasted partly cloudy conditions with a chance of isolated showers until the afternoon, and a slight rise in temperatures. Jpost.com staff contributed to this report.