"The kiln was meticulously constructed, and consisted of two chambers," says IAA. 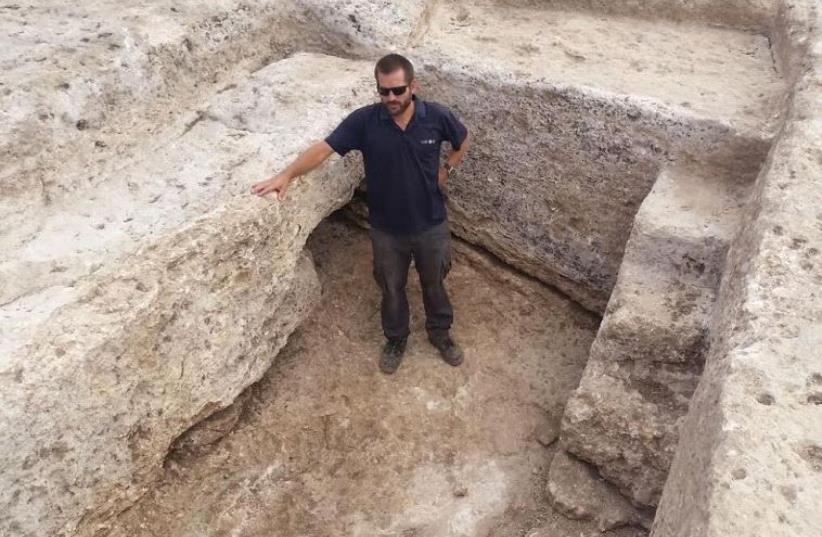 IAA excavation director Joppe Gosker inside the pottery workshop’s water reservoir in Shlomi.
(photo credit: COURTESY OF ROYEE LIRAN/ ISRAEL ANTIQUITIES AUTHORITY)
Advertisement
An ancient pottery workshop featuring an unusual kiln where jars were produced during the Roman period 1,600 years ago was unearthed in an archeological excavation carried out in Shlomi, in the Western Galilee, the Antiquities Authority announced on Wednesday.The kiln was discovered during the course of an extensive six-month dig during which hundreds of young people from the North volunteered, including many students from Shchakim High School in Nahariya, and ORT High School in Kiryat Bialik.The exca- vation is being carried out at the Bat el-Jabal antiquities site prior to the construction of a new neighborhood at the initiative of the Israel Lands Administration and the Shlomi Local Council, the Antiquities Authority said.According to Antiquities Authority excavation director Joppe Gosker, the find is unusual compared with others unearthed from that period.“What makes the pottery works so special is its unique kiln, which was hewn in bedrock and is unlike most of the kilns known to us that were built of stone, earth and mud,” said Gosker, noting the workshop also included a system for storing water and storage compartments.“The kiln was meticulously constructed,” he said. “It consisted of two chambers: one a firebox, in which branches were inserted for burning, and a second chamber where the pottery vessels were placed that were fired in the scorching heat that was generated.”Gosker said the ceramic debris piled up around the kiln indicates that two types of vessels were manufactured in the facility, including storage jars that could be transported overland, and jars with large handles used to store wine or oil, which were exported from Israel by sea.Anastasia Shapiro, a geologist with the authority who is researching the production of pottery vessels, noted that Shlomi’s geological conditions were ideally suited for the ancient workshop.“We can explain the quarrying of this rare kiln right here because of the special geological conditions found in the area of Shlomi,” said Shapiro.“There is chalk bedrock, which on the one hand is soft and therefore easily quarried, and on the other hand is sufficiently strong to endure the intense heat.”Gosker said a large portion of the Bat el-Jabal antiquities site is slated to be an archeological park that will be open for the benefit of the residents of the new neighborhood, as well as the public.Other archeological surveys performed in the area have unearthed the remains of a royal structure with a gate, likely from the Late Roman period, which coincides with the use of the pottery workshop.Additionally, the remains of the walls of buildings identified probably date to the Byzantine period, Gosker said.