Rivlin at one time had fought the establishment of diplomatic relations with Germany. 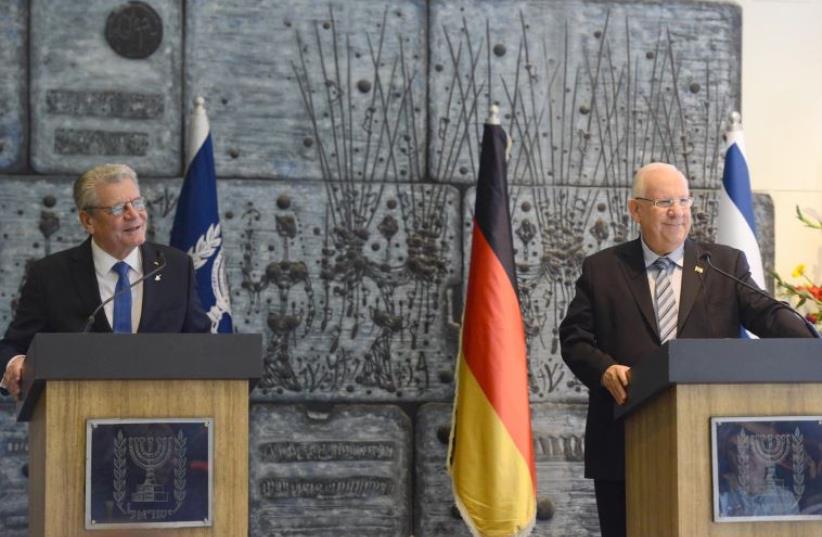 President Reuven Rivlin hosts his German counterpart Joachim Gauck at the President's Residence in Jerusalem
(photo credit: Mark Neiman/GPO)
Advertisement
German President Joachim Gauck’s visit to the President’s Residence in Jerusalem on Sunday represented the closure of a circle for President Reuven Rivlin, who 50 years ago participated in a fierce demonstration against the establishment of diplomatic relations between Germany and Israel.Rivlin had participated in other demonstrations against Germany as well, such as when Rolf Pauls, Germany’s first ambassador to Israel, presented his credentials.Many protesters then wore yellow stars similar to what had been forced upon the Jews of Europe by the Nazis.More than anything they protested the playing of the German National Anthem in the President’s Residence.This was part of what Rivlin called his “formative political experience.”Yet on Sunday morning, Reuven Rivlin, as President of Israel, welcomed the President of Germany and stood and listened as a band of the Israel Defense Forces played the German National Anthem.When he subsequently addressed dignitaries and media who congregated in the reception hall, he said he sensed more than anything else that the event closed a circle for him personally, and yet it was still an open circle.Fifty years after the establishment of diplomatic relations, he admitted, Israeli-German connections still awaken in him a sense of discomfort, even though he is aware that such connections are proper, correct and necessary.“They are vital for us and essential for you,” Rivlin told his guest, adding that Israel and Germany are destined to be forever entwined in an emotion of pain and hope.Rivlin also touched on the terrorism engulfing the world by saying that “when terror, violence, intolerance and religious persecution have returned to the streets of Jerusalem, Europe and across the Middle East, Berlin and Jerusalem must demonstrate a joint ability to stand firm in the face of challenges of the present and the future.”Rivlin had met Gauck at a concert the previous evening in Tel Aviv and before that in Germany earlier this year.On Saturday night he said that “the connection between Germany and Israel is not, and never will be, simple. The relationship between us needs much help and education to listen; and music is a great way to teach us to listen to each other. True friendship, between our nations and countries, is important to me, as well as to all of Israel.”Gauck said: “We mark the jubilee year of our relations during troubled times. I am convinced that it is still right to celebrate, because we need to show who we are. We live during a period in which others try to spread danger, and we think about the future. We need music and art to open the doors of thought. Those who try to defend themselves and their people need the magic of art while searching for peace.”Gauck also met with rime Minister Benjamin Netanyahu on Sunday and said he was pleased to have heard from Netanyahu that he was interested in improving the quality of life for Gaza Strip residents.The German president said it was important for Israel to understand that Germany’s diplomatic overtures to Iran were not directed against Israel. He and Rivlin were aware that Israeli, German ties needed to be strengthened not only on a political level but through cultural and scientific exchanges.Referring to a visit last week by 200 German youth leaders, he said the shadow of Israel’s negative attitudes towards Germany still lingers, and that Germany understands Israel’s sensitivities regarding the past.Gauck also said Germany is aware that it cannot tell Israel how to defend herself, nor does it want its friendship with Israel to be harmed by any disagreement.He made it clear that when Germany criticizes Israel it is in a sense of friendship and not animosity, and that there is an unbreakable bond between the two countries. Gauck pledged that Germany will always defend Israel’s right to exist, and stand up for Jews when they are under attack.Germany will always stand shoulder to shoulder with Israel, Gauck said.