Colbert described Kushner as the "leader of the preppy camp across the lake," and agreed government needs overhaul because "somebody keeps putting totally unqualified people in charge." 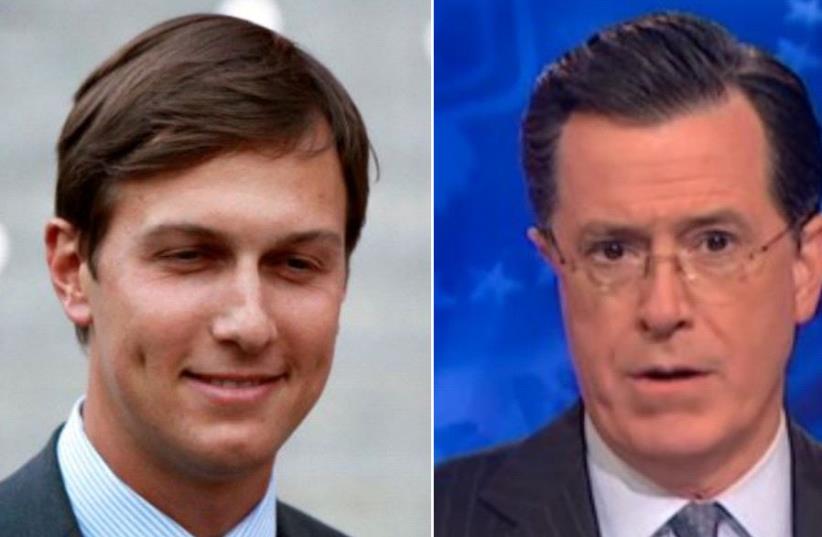 Stephen Colbert, Jared Kushner
(photo credit: screenshot,REUTERS)
Advertisement
Americans for the most part believe that positions of importance and influence should be attained by merit and ability, so when the host of one of the country's most popular late night television programs took a shot at US President Donald Trump's son-in-law Monday evening, it resonated with audiences. Hours after The Washington Post reported that Jared Kushner would head a new office designed to make government more efficient,  The Late Show With Stephen Colbert took the opportunity to express what it thought about the new appointment. "The White House just announced that Trump son-in-law and leader of the preppy camp across the lake, Jared Kushner, will oversee a broad effort to overhaul the federal government," said Colbert. "And the government desperately needs overhaul. I mean, somebody keeps putting totally unqualified people in charge of really important stuff.”


Colbert continued by saying that the senior Trump advisor would oversee the newly created Office of American Innovation, which the comedian joked was “vague, but still better than the original title, the Bureau of Obvious Nepotism.”Colbert described the new commission as being tasked  with fixing the "government with business ideas. And you know he’s got great business ideas, like being born into a wealthy real estate family … or marrying into a wealthy real estate family. Why hasn’t the government tried that?”Kushner reportedly told the Post that he wants the government to "be run like a great American company.""And if they can’t do that, run it like a Trump company,” Colbert added.
Advertisement
Subscribe for our daily newsletter