Welfare organizations pick up mantle to help needy on Passover 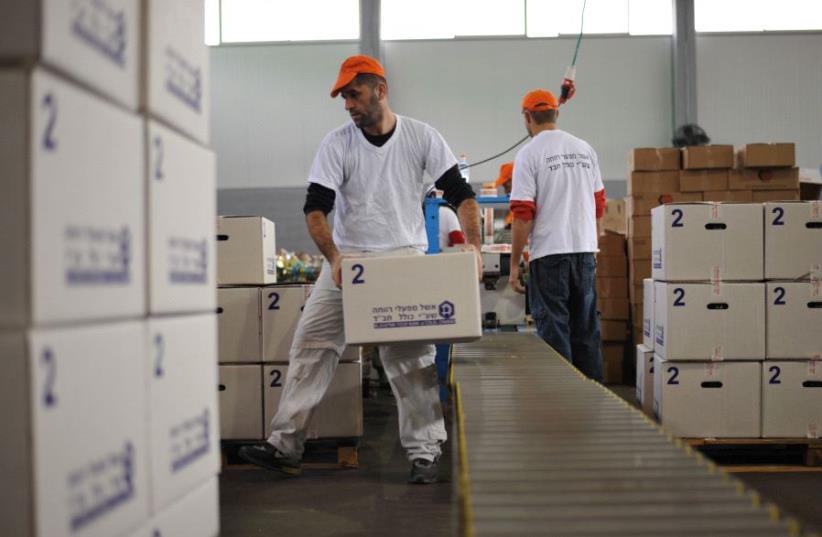 Volunteers put together food packages ahead of the Passover holiday at the Colel Chabad main packaging facility in Kiryat Malachi
(photo credit: ISRAEL BARDUGO)
Advertisement
“Mine is a very difficult situation – emotionally, socially, economically,” Miriam, a 41-year-old single mother from Beer Sheba, told The Jerusalem Post ahead of the Passover holiday.With four children aged four through 20 years old from two marriages dependent on her, Miriam, has been living under the poverty line for many years.Her health began to deteriorate in recent years, and she was placed on 100% disability, receiving an allotment of NIS 3,000 per month – well below the minimum wage of NIS 5,000 – from the National Insurance Institute, the only source of income for her and her children.“I have a lot of medications that I need to pay for, and I suffer from a lot of health problems,” she explained. “Just my electric bill costs NIS 900, so all of my allotment goes toward paying bills, and at the end of the month I am left with nothing.”The victim of domestic abuse for many years before finally finding the courage to divorce her husband, she explained that she now also suffers from depression and mental health issues as a result of her socioeconomic situation.“When I was younger and just divorced with small children, I never asked for any help,” she said.Due to her ongoing health problems, she has had no choice but to accept charity just to get by.“Today, I am 41, with a lot of diseases, and so I am broken, I don’t have the strength that I once had and I need the help,” she said, bursting into tears.Miriam and her family are just one example of the hundreds of thousands of Israeli families living in poverty who have to rely on welfare organizations and donations to get by during the holidays.According to the NII Annual Poverty Report, released in December, more than 1.7 million people are living in poverty in Israel, including 460,800 families and 764,200 children, accounting for over 20% of the population.Miriam and her family are among the hardest hit, suffering from severe poverty as well as food insecurity.As such, she has no choice but to rely on charitable organizations, food baskets and handouts during the holidays and all year long.During Passover, Israel’s charitable organizations pick up the mantle and rally together to assist the needy.Organizations such as the International Fellowship of Christians and Jews, led by Rabbi Yechiel Eckstein, offer grants to needy Israelis, including families, children and the elderly. Latet, the humanitarian aid organization, held its annual food drive at supermarkets across the country in the week leading up to Passover, collecting food for tens of thousands of needy families.Last week, Labor and Social Services Minister Haim Katz announced that he would expand the national initiative for food security by an additional 50% to help more families receive food during the holidays and throughout the year.Estimated at NIS 60 million, the initiative works in collaboration with Colel Chabad, the longest running charitable organization in Israel, and Leket Israel – the National Food Bank to provide approximately 10,800 of the neediest families suffering from food insecurity – like Miriam and her family – with a prepaid card of NIS 500 per month to purchase food. The expansion will provide an additional 5,000 families with support, for an estimated NIS 30m.Katz made the announcement during a tour of Leket Israel’s logistics center in Ra’anana.“There were some opposed to launching the National Food Security Program, but in my eyes, Leket Israel supplying the fruits and vegetables and Colel Chabad providing the food cards is the right way,” he said. “The delivery of fresh produce combined with the food cards restores much dignity to the neediest families in Israel.”As part of the program, families will receive a prepaid card for NIS 250, which can be used to buy food and necessities in grocery stores, with the exception of tobacco and alcohol, while an additional NIS 250 will be provided in rescued food, such as fruits and vegetables, which will be delivered directly to the families’ homes.During the holidays, families are provided with additional gift cards to purchase food.“Last year for the holidays, I would simply receive two boxes of dry goods that we would live off of for the month,” Miriam explained. “Now the initiative has changed and I can go to the store and buy what I need and what I want.”Miriam said the NIS 250 of fruits and vegetables delivered to her home is “less useful” to her because she would prefer to receive NIS 500 with which to buy food and other goods.Still, she added, she is so thankful for the assistance, because without it she would not be able to feed her family.“I say thank you and I called to say thank you, because any help is appreciated and makes a difference – it really helps a lot,” she said. “I am trying to be strong. And still, I’m lucky, because every holiday my sister invites me and takes care of us, and this year we will be doing the Seder with her and with family.”