What does today’s German election mean for Israel?

An objective observer can fathom why German elections matter for Israel.

German and Israeli national flags
(photo credit: REUTERS)
Advertisement
The German federal election on Sunday has tremendous significance for Israel, largely because the Federal Republic is one of Israel’s most important allies within the European Union.A German government that shows solidarity with Israel can continue to supply it with advanced submarines and intelligence data, help blunt anti-Israel measures at the UN, and stymie misguided – and at times antisemitic – EU sanctions against the Jewish state. Add mushrooming trade and tourist relations, and an objective observer can fathom why German elections matter for Israel.While Chancellor Angela Merkel’s Christian Democratic Union is slated to secure the most votes (34%, according to the most recent poll), the anti-immigrant and far-right Alternative for Germany is projected to win an eye-popping 13% of the vote. German election law requires a party to cross a 5% hurdle to enter the Bundestag.The AfD has triggered anxiety among Germany’s relatively small Jewish community because of its alleged xenophobia and antisemitism, as well as its recent glorification of Germany’s soldiers during the Holocaust.The AfD’s top candidate, Alexander Gauland, said earlier this month: “If the French are rightly proud of their emperor and the Britons of Nelson and Churchill, we have the right to be proud of the achievements of the German soldiers in two world wars.” 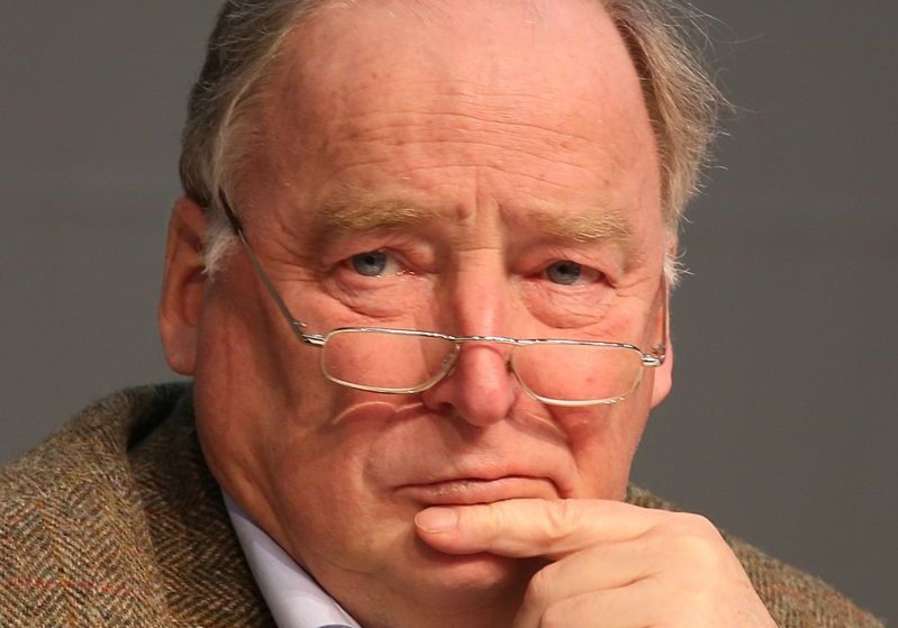 Alexander Gauland. (photo credit:METROPOLICO.ORG/WIKIMEDIA COMMONS)
The AfD’s 76-page party program make no mention of fighting antisemitism or of support for Israel. All of this helps to explain why the AfD likely endangers Israel’s security.Merkel’s CDU party program pledges a “special responsibility of Germany toward Israel.”The CDU passed an anti-BDS resolution last year, declaring: “Who today under the flag of the BDS movement calls to boycott Israeli goods and services speaks the same language in which people were called to not buy from Jews [under the Third Reich].”And many Israelis will recall Merkel’s 2008 address to the Knesset, when she said Israel’s security is “nonnegotiable” for Germany.Nevertheless, neither Merkel, nor any party in the Bundestag, rejected the EU’s sanctioning in 2015 of Israeli products from the disputed territories. The EU measure labeling Israeli goods was widely considered a form of EU-sanctioned BDS. It is unclear if the Merkel administration will seek to stop the proposed UN Human Rights Committee measure to blacklist companies operating in the disputed territories.Merkel has showed unconditional support for her controversial Social Democratic foreign minister Sigmar Gabriel, who has fostered anti-Israel sentiments in his interactions with Prime Minister Benjamin Netanyahu.The Social Democratic Party (SPD) platform mirrors the CDU recognition of a “special responsibility of Germany for the security of Israel,” but links it explicitly with the peace process with the Palestinians. The new Insa poll commissioned by the Bildnewspaper showed the SPD garnering 21% of the votes on Sunday.Martin Schulz, the Social Democratic challenger to Merkel, is not an unknown quantity for Israelis. He praised a speech by Palestinian Authority leader Mahmoud Abbas to the European Parliament in 2016 which, according to The New York Times, recalled “antisemitic claims that led to the mass killings of European Jews in medieval times.”Then-European Parliament president Schulz used bogus water statistics, during his 2014 address to the Knesset, to trash Israel’s water policy toward the Palestinians.
Netanyahu to Germany: Take action against department store that removed Israeli goods
Then-Diaspora affairs minister Naftali Bennett told The Jerusalem Post at the time, “When he [Schulz] said Palestinians get 17 liters of water for every 70 Israelis get, it was a total lie. It’s preposterous.” Bennett’s Bayit Yehudi party walked out to protest the speech.Schulz did, however, condemn Palestinian antisemitism during an election debate with Merkel earlier this month. While commenting about Muslim immigration, he referred to “young Palestinian men that come to us, who were brought up with deeply rooted antisemitism.” He added, “To them we must clearly say: ‘In this country you only have a place when you accept that Germany is a country that defends Israel.’”As then-SPD general secretary, Andrea Nahles, who is currently labor minister in Merkel’s coalition administration, declared that in 2012 that her party “shared values” and “goals” with Fatah. She also said the SPD seeks a “strategic dialogue” with Fatah. Gabriel praised Nahles for the party’s embrace of the Palestinian movement.The SPD considers the 2015 Iran nuclear deal “an important success.” Gabriel has snubbed Israel’s concerns about Iranian hegemony and traveled numerous times to Iran to cut business deals with the mullah regime. All the German parties are enthusiastic supporters of the nuclear deal. The atomic pact has opened the doors for multi-billion dollar trade deals between Tehran and Berlin.The Green Party MP Volker Beck, chairman of the German-Israel Parliamentary Group, was not included on the party’s candidates list for reelection. Beck is arguably Israel’s most important ally and defender of core Israeli security interests in the Bundestag. According to the Bild poll, the Green Party will garner 8% of the vote. The party has sent mixed-messages about BDS.According to an article in the German-language Israelnetz website, the Greens reject a “boycott of Israel as an instrument of German and European foreign policy.” Yet the Greens spearheaded in 2013 a legislative initiative to single out Israeli products from the disputed territories with labels.A leading Green Party deputy, Jürgen Trittin – mirroring the AfD’s belittling of the Holocaust – compared refugees camps in Libya today with concentration camps during the Holocaust. Trittin has equated Netanyahu with autocratic leaders.The Left Party pushes a hard-core anti-Israel agenda in the Bundestag. The party of former East German socialists, West German communists and trade unionists is polling at 11% of the electorate. The Left Party – the largest opposition party – has members who support the US- and EU-classified terrorist entities Hamas and Hezbollah.Left Party deputy Christine Buchholz has defended the “legitimate resistance” of Hamas and Hezbollah against the Jewish state.Annette Groth, a Left Party deputy who the Simon Wiesenthal Center criticized for antisemitic BDS activities, will not serve in the next parliament.The Free Democratic Party is polling at 9%, according to the Bild poll. The party’s 158-page program mentions Israel twice. The FDP says “Israel’s right to exist” is part of Germany’s national interests. The second mention calls for Israel sharing a fixed border with an independent Palestinian state.