Should elected officials be allowed to block people from their social media accounts? 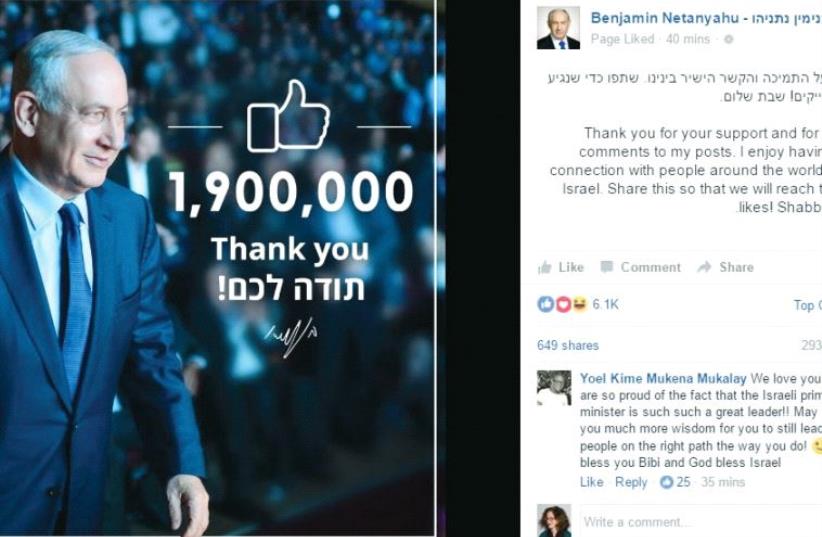 A post on Benjamin Netanyahu’s Facebook page that celebrated the achievement of having 1,900,000 followers – more than all the followers channels 10 and 2 have on Facebook and Twitter combined
(photo credit: screenshot)
Advertisement
Social media has become a necessary communications tool for politicians around the world in recent years, with US President Donald Trump, Prime Minister Benjamin Netanyahu and nearly every member of Knesset, taking their messages directly to the public – well, almost.Many politicians have blocked people from viewing their social media pages, raising questions about ethics and free speech.Zionist Union MK Yoel Hasson asked the Knesset House Committee on Sunday to set guidelines for fair use of social media pages by lawmakers and suggested very clear rules as to when users can be blocked from viewing their pages.Hasson’s idea is backed by a response from June by State Comptroller Joseph Shapira, in his capacity as public ombudsman, to a complaint about the Mayor of Petah Tikva blocking a resident from his Facebook page.Shapira said the ban violates free speech, and as such, the municipality must publish clear rules on the topic, which includes a warning before blocking someone, as well as keeping track of those who are blocked, in order to allow a review of such decisions.“Not giving a person the opportunity to respond on the official Facebook page of a public figure, or erasing his comments harms that person’s freedom of expression,” Shapira wrote.Hasson worked with journalism and transparency advocate Tomer Avital, who has long campaigned against politicians blocking social media users, on rules for his Facebook page.The MK does not allow harmful content which includes cursing, personal accusations, violent or racist incitement or spam. Harmful content will be erased and the user will get a warning.If he or she repeatedly posts harmful content, he or she will be notified and blocked.His office will document all bans, and the person will have the right to appeal.In addition, every user can apologize and say he or she didn’t mean to break the rules and be reinstated, but that option can only be used once.Avital found in his research that Netanyahu blocks more users than any other politicians – he also has more followers or “likes” than anyone else – followed by Yesh Atid leader Yair Lapid.On the blog of his “100 Days of Transparency” project, Avital wrote that it is important for the comptroller to be involved in this issue.“The conversation with politicians on Facebook must take place without political censorship,” he wrote. “Randomly blocking respectful, but critical posts is shameful behavior that has no place in a democracy.The US is also grappling with whether politicians should be allowed to block users.Free-press advocates The Knight Foundation sued the US government on behalf of users who Trump blocked on twitter, due to his frequent use of the media to express his views and policy goals.Last month, The Wall Street Journal reported on a Virginia Federal Court ruling that politicians who block people from viewing a Facebook page that used to communicate with constituents, violates the First Amendment.However, officials may moderate comments in case of harassment. The lawsuit was filed by a man who was blocked by a county official after posting critical comments on her Facebook page.“The suppression of critical commentary regarding elected officials is the quintessential form of viewpoint discrimination against which the First Amendment guards,” the ruling stated.