An Israeli couple reportedly masterminded a diamonds scheme of an immense scale, allegedly stealing gems worth millions of shekels. 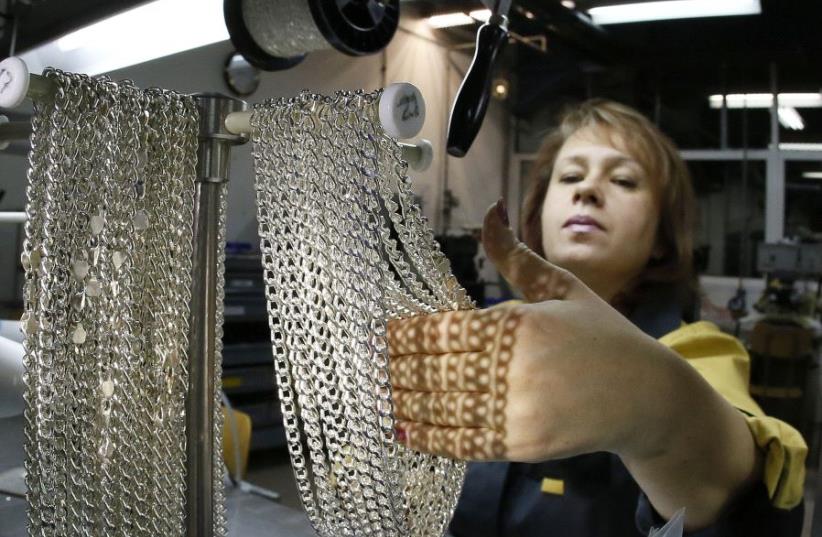 An employee takes silver chains at the jewelry departmen.
(photo credit: REUTERS)
Advertisement
Police have arrested a Haifa couple for allegedly masterminding a diamonds scheme whereby the wife stole millions of shekels worth of the gems from a diamond- polishing factory in the northern city, where she worked for the past nine years, and transferred them to her husband’s jewelry shop in Haifa.“[She] took advantage of her employer’s trust, handing over [the diamonds] to her husband, who owns a jewelry store in the city,” the Coastal District Police said in a statement.In a search of the couple’s home in Haifa on Tuesday, police seized diamonds worth hundreds of thousands of shekels allegedly stolen from the factory and other documents.The investigation also raised suspicions of money laundering and illegally acquiring assets and vehicles as a result of suspected diamond smuggling.Police investigators issued an order to freeze the couple’s assets.Israel is already a key trading center for diamonds, which account for about 20% of all industrial exports. In the first quarter of 2017, Israel exported an estimated $1.7 billion in diamonds, according to the Israel Diamond Exchange.Veteran Israeli diamond broker Hanan Abramovich was arrested in April 2016 on suspicion of defrauding some of the most senior diamond industry figures in the country out of approximately $60 million.In a 2014 case, police said an Israeli diamond smuggler posed as a commercial pilot to skirt customs and police in South Africa while en route to Israel with smuggled diamonds.Ben Hartman and Reuters contributed to this report.