With prime minister in town, Australians laud ties with Israel

One Australian minister said that over the last year or so ten Israeli companies with a combined market value of $1.7 billion had been listed on the Australian Stock Exchange. 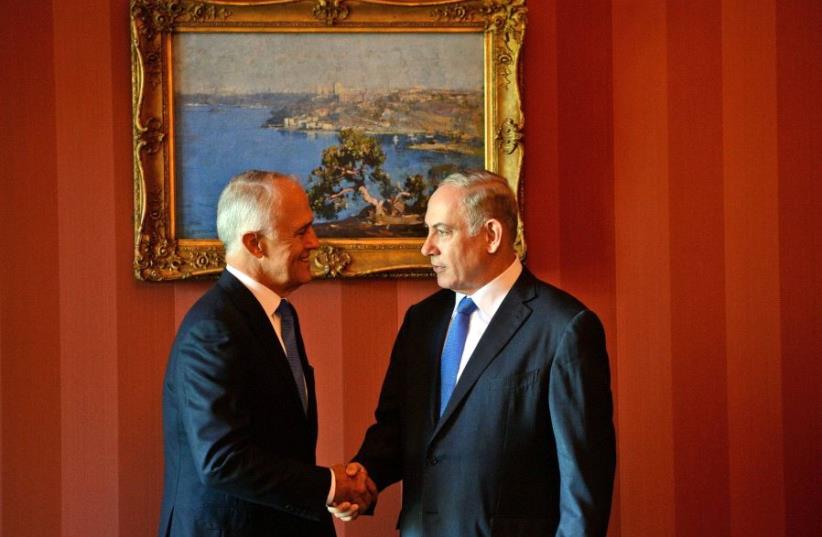 Turnbull and Netanyahu during the latter's official visit to Australia
(photo credit: GPO)
Advertisement
Australian Prime Minister Malcolm Turnbull checked into the King David Hotel in Jerusalem at 2 p.m. on Monday, just less than two days later than he originally intended, and almost immediately entered into discussions with Prime Minister Benjamin Netanyahu.Neither Turnbull nor Australian Ambassador Chris Cannan attended a cocktail reception in Turnbull’s honor that was co-hosted by the Australian Embassy and the Israel Australia Chamber of Commerce. But Turnbull’s wife, Lucy, was there before joining the Netanyahus for dinner, and so was Cannan’s immediate predecessor, former Australian Ambassador Dave Sharma, who returned to Israel specifically to participate in Tuesday’s centenary commemoration of the Battle of Beersheba.Parliamentarians representing Turnbull’s Liberal Party as well as those from the Australian Labor Party led by party and opposition leader Bill Shorten were in attendance, as well as members of five delegations – four of them trade delegations – who are in Israel to enhance bilateral relations in their respective fields and to join in the Beersheba festivities.Josh Frydenberg MP, the minister for the Environment and Energy who was in Israel last April to sign a declaration of intent with Minister Zev Elkin for cooperation on various environmental issues, recalled that when Menachem Begin was opposition leader, he went to Washington and, at a press conference, was full of praise for the government. A puzzled journalist couldn’t understand this and asked how come, to which Begin replied that when he’s in Israel he’s the leader of the opposition, but when he’s in America he’s a proud Israeli.Frydenberg said that Australians are much the same and that all of the parliamentarians present, regardless of their political affiliations, had come as proud Australians.The minister also referred to the fact that Australia’s Dr. Herbert Evatt had made sure that Australia’s would be the first “yes” vote for the partition of Palestine at the UN General Assembly on November 29, 1947.Frydenberg said that the strength of Australia’s bipartisan commitment to the bilateral relationship was based on common values and shared interests. Bilateral trade between the two countries stands at $1.2 billion, he said.Praising the role of the Chamber of Commerce in fostering trade relations, Frydenberg said that over the last year or so ten Israeli companies with a combined market value of $1.7 billion had been listed on the Australian Stock Exchange.