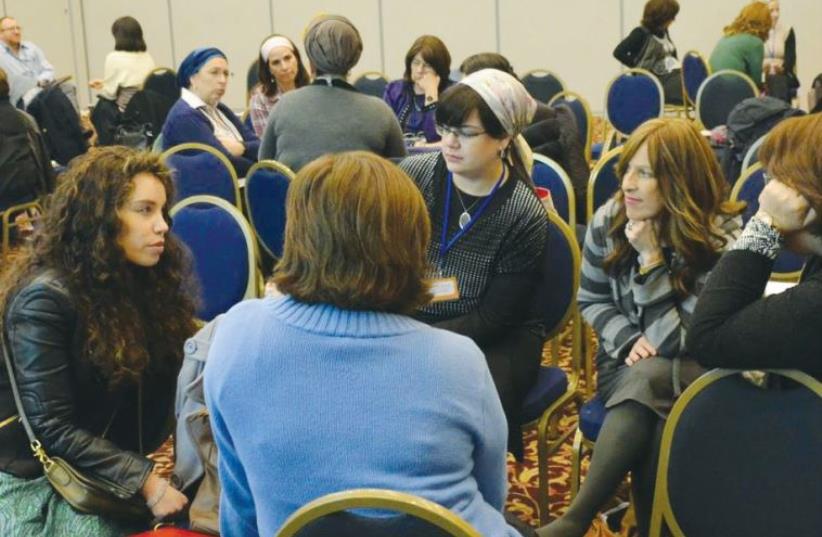 Participants at the second annual international conference organized by Tahel, the Crisis Center for Religious Women and Children
(photo credit: SHARON ALTSHUL)
Advertisement
Women in Israel live longer and are better educated, but earn much less than their male counterparts, according to a report released Sunday by the Central Bureau of Statistics.The report was released ahead of International Women’s Day – which is marked annually on March 8 – and presented a socioeconomic picture of Israeli women.According to the findings, at the end of 2014 there were 3,042,900 women aged 15 and above living in Israel.The average life expectancy of women in 2014 in Israel stood at 84.1 years, compared to 80.3 for men.With regard to marriage and family life, the report found that women in Israel are getting married at a later age and having children at a later age.According to the data, in 2013, 52,705 women got married.The average age for a newly married woman stood at 25.1 – an increase compared to an average age of 24.5 in 2004.In breaking this statistic down by sector, the findings indicated that the average age for marriage among Jewish and Christian brides stood at 26 and 25.3, respectively. The average age of Muslim and Druse brides was significantly lower, standing at 21.9 and 23.8, respectively.In 2014, some 171,400 women gave birth, and the average age of the mother was 27.5 – an increase from 26.5 a decade ago.The findings also indicated that in 2015 there were some 1,082,000 women aged 15 and older who were mothers of children up to the age of 17. Of these women, 90 percent were living with a significant other while some 106,000 were single mothers – 10% of women among the Jewish population and 7% of Arab women.The average number of children per woman in Israel stood at 3.08 – the highest in the OECD, which has an average of 1.7 children per woman, the report cited.With regard to the labor market, the CBS report found that there were major salary gaps between men and women.In 2014, the average monthly salary of a woman stood at NIS 7,439, while it was significantly higher – NIS 11,114 – for a man.The average monthly income for self-employed women stood at NIS 6,847, compared to NIS 12,454 for men.The report explained that one of the main reasons behind the salary gap was the number of hours men and women worked – 45.2 hours per week for men and 36.7 hours for women. As such, the report stated that when taking this into account, the salary gap between men and women stood at 16.3%.The findings also indicated that the percentage of women aged 15 and older who entered the workforce stood at 59.1%, compared to 69.3% of men.Of the women who are employed, 67.6% worked fulltime, while 32.4% worked parttime, compared to 86.6% of men with full-time jobs and 13.4% of men working part-time.The report also found that 75% of married mothers were in the workforce – 77.5% of mothers with one child, 78.9% of mothers with two children and 62.5% of mothers with four or more children.In hi-tech, there were some 104,600 women employed in 2015 (compared to 184,100 men), comprising 36.2% of workers in the field. Additionally, the report noted that of all executives, only 32.2% were women.Social Equality Minister Gila Gamliel presented her own data to the cabinet on Sunday, showing that the wage gap was even higher in the public sector than private sector.“The data shows high wage gaps between women and men in the public sector,” Gamliel said. “The Social Equality Ministry, in collaboration with the Civil Service Commission and the Supervisor of Wages at the Finance Ministry, is promoting a strategic plan to minimize to the point of eradicating wage gaps entirely.”The report also cited gaps between men and women in the field of education.In 2014, 68% of 12th-grade girls and only 55% of boys were eligible for a matriculation certificate.In higher education, the findings indicated that in the 2014/15 academic year there were some 311,800 students in Israel, of them 181,000 women, accounting for 58.1% of all students.This is a significant increase from the 1969/70 academic year, when the report stated that women comprised only 43.3% of the total student body.The report also found that the two fields with the highest percentage of women students were paramedical studies (82.7%) and teaching and education (80.6%). In contrast, the fields with the fewest women included the physical sciences (37.3%), mathematics, statistics and computer science (29.1%) and architecture and engineering (27.4%).