Yitzhak Rabin: A leader with vision

Shimon Peres reflects on the legacy of Yitzhak Rabin 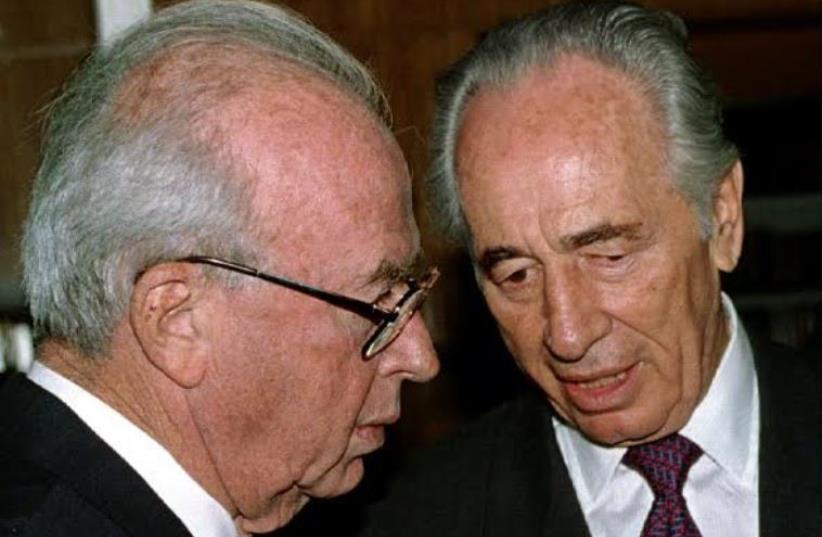 Yitzhak Rabin (left) with Shimon Peres
(photo credit: REUTERS)
Advertisement
On July 13, 1992, Yitzhak Rabin presented his government before the 13th Knesset: “Members of the Knesset, please take note that this government is determined to expend all the energy required, to take any path, to do everything necessary, everything possible, and more, for the sake of national and personal security, to achieve peace and prevent war, to do away with unemployment, for the sake of immigration and absorption, for economic growth, to strengthen the foundations of democracy and the rule of law, to ensure equality for all citizens and to protect human rights.”So he believed, so he promised, and so he did. He was no longer a novice at leadership.Yitzhak’s outstanding abilities in leadership and the military had already been proven during his time as chief of staff during the Six Day War, during his service as ambassador in Washington, during the course of his various positions in the Palmah, and as a member of government throughout the years.As a leader, Yitzhak always had a vision. At the same time, he always remained down to earth – both in the trying times of war and at the height of his success.He inspired the public, but he never got carried away by the crowd’s applause, nor was he ever deterred by the life-threatening slander directed at him.Yitzhak knew our Arab neighbors did not want a Jewish state. He knew there was defamation against Israel in the Egyptian press, in the Jordanian press and certainly in the Palestinian press. He knew the world was not always on our side, and sometimes even our closest allies would choose to impose an embargo on us.Yitzhak knew his vision had antagonists both outside and inside the country. As a true leader, it would not occur to him to give in to danger, attacks or provocation. Following the vision of David Ben-Gurion, he considered all these as diversions, distracting from the main objective of establishing a Jewish and democratic state with an enduring Jewish majority.He didn’t believe in pushing off tough decisions. The galloping horse of history doesn’t wait for those who hesitate.Despite the incitement against him, Yitzhak wore no bulletproof vest – neither physically nor politically. He knew he had no choice but to bring peace, no matter the land mines along the way, Left and Right.As members of government, we had chosen the way of peace and remained loyal to it. The cabinet worked as a unit, headed by a surefooted, unshakable leader.The achievements of Rabin’s government speak for themselves.The government changed the nation’s order of priorities. It rebuilt our social and economic infrastructures, developed our resources and sought peace at the price of a historic compromise: two states for two peoples. For, if there shall not be two countries, there shall be one continues tragedy for both peoples.Israel earned worldwide recognition for its brave stance for peace, for the democracy and the social structure it upheld and for the agreements it reached with Egypt and Jordan.Yitzhak was a valiant leader who succeeded to pair great hopes with great deeds.His was a government that was revolutionary in the fields of education, academia, culture and science. Transport infrastructure thrived. During its term, teachers’ salaries were dramatically increased; the budget for education grew 70 percent.Higher education was reformed and colleges began to flourish in the periphery.In the realm of public health, one million citizens from all around the country gained access to state-funded healthcare.Rabin’s government brought its citizens together – Jews, Muslims, Druse, Beduin and Christians. It worked to strengthen equality between citizens and a sense of civil brotherhood. It invested in Arab communities at an encouraging and inspiring pace, reaching out its hand to coexistence. The cabinet made access to child allotments equal, regardless of religion or ethnicity.Yitzhak Rabin’s relationship with the United States reached a peak, both in terms of the bilateral relationship and of the bipartisan support we enjoyed. We laid down the foundations for a two-state solution and began building our peace with Jordan. The agreement with Jordan drew a peaceful border at our East and the agreement with Egypt provided safety in the South. The world respected Israel for its uniqueness, for its democratic values and for the unusual combination of military bravery for the sake of defense, and social bravery for the sake of peace.None of this was a walk in the park. We had horrendous terrorist attacks and Arafat failed to keep together one people and one rifle. Extremist factions did not cease to exist.There was wild incitement against us.Yet, today, we can say that despite all the obstacles along the way, the bullet that shot Yitzhak did not succeed.Yitzhak Rabin’s legacy has deep roots in our hearts and minds, and we miss his vision and leadership today more than ever, a leadership that carries a clear message of hope for the people of Israel, facing difficult decisions bravely. A brave leader who realized that the future of the State of Israel as a Jewish and democratic state with an enduring Jewish majority depends wholly on our ability to part from our Palestinian neighbors.This remained his legacy, an uncompleted goal of a historic compromise that has to be achieved for the benefit of future generations and the security of the State of Israel.