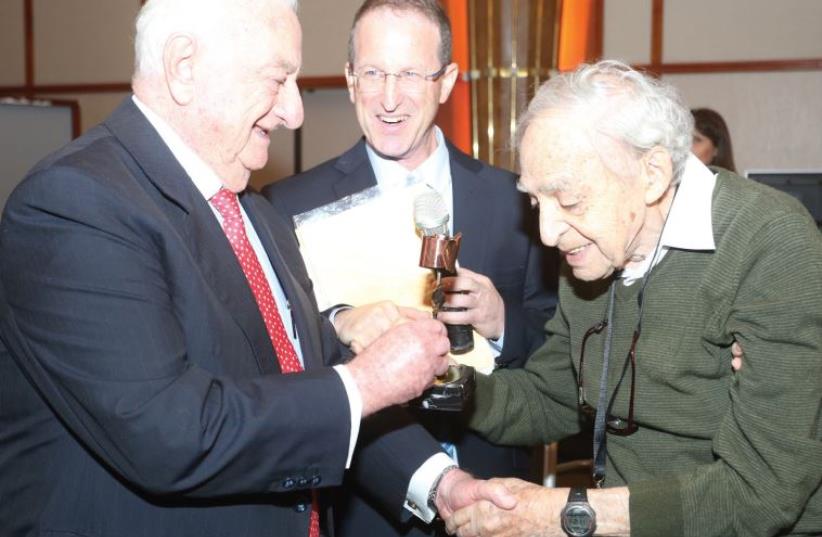 Dr. Zvi Harry Tabor (right), founding father of Israel’s solar energy industry shown receiving an Energy Man of the Year award last month. Handing Tabor the title is businessman Yeshayahu Landau (left), as EcoEnergy CEO Amit Mor looks on
(photo credit: YAEL TZUR)
Advertisement
Dr. Zvi Harry Tabor, the Anglo-Israeli responsible for the dude shemesh solar water boilers that adorn the country’s rooftops, has died at the age of 98.Considered a founding father of the country’s solar industry, Tabor, who died on Tuesday, immigrated to Israel from Great Britain in 1949, where he quickly made his mark as a physicist in both the research and industrial sectors.Just one month ago, Tabor earned the title “Energy Man of the Year” at the annual Israel Energy & Business Convention in Tel Aviv.“He is not only the man of the year for me, but the man of the century in the energy sector,” Dr. Amit Mor, CEO of the EcoEnergy consulting firm and convention organizer, said at the November 23 conference. “There is no person in Israel or in the world who contributed so much to energy independence, sustainability and the energy field in general. The prize we are granting him here is only a small tribute in comparison to the enormous gratitude we all owe him.”Born in London, Tabor was a member as a child of the Habonim Zionist Youth Movement. After studying physics at the University of London, in 1947 he was recruited by the Hagana to France to convert freight ships into passenger ships – destined to carry illegal immigrants to Israel towards the end of the British Mandate period.Prior to the establishment of the Jewish State, Tabor had met in England with secretary of the Mandate’s Board of Scientific and Industrial Research, and the secretary – who Tabor described as a disciple of prime minister David Ben-Gurion – conveyed his enthusiasm about the young physicist to the prime minister once the country was formed.In 1949, Ben-Gurion sent a letter to Tabor, inviting him to immigrate to Israel himself and join the physics and engineering desk at the Research Council of Israel.“I had decided that I was coming to Israel [to explore the possibility of aliya] without a [job] offer and 10 days before I left England I get a letter from Ben-Gurion’s office saying they are offering me a job. So that made life very easy,” Tabor told The Jerusalem Post in a 2008 interview.Soon after his arrival, Tabor established the National Physical Laboratory of Israel and completed a doctorate in physics at the Hebrew University of Jerusalem.In the 2008 interview with the Post, Tabor said he chose the solar energy industry predominantly due to the fact that Israel no energy source of its own. While a small number of people were using solar water heaters that he described as “bad copies” of those abroad, Tabor felt that as a physicist, he could “double the efficiency of the thing without making it any bigger.”By 1955, he developed the Tabor Selective Surface, thermal panels that could absorb energy from the sun.Eventually, he integrated this technology with the water boiler, to create the modern dude shemesh water heater that has become a fixture on rooftops across Israel. The technology earned the Weizmann Prize for Exact Sciences, an award that Tabor received personally from Ben-Gurion in 1956.“Now I had luck because I made a development which no plumber could make,” Tabor said in 2008. “A physicist could make it because it required a special knowledge of physics. Simple physics, but nevertheless.”Tabor’s invention also enabled the construction of small solar power plants in remote locations not hooked up to the Israeli grid. In 1958, he was able to establish a permanent, fixed solar collector based that employed mirrors – minimizing the need for tracking the movement of the sun.In the 1960s, Tabor developed a solar powered turbine with Yehuda Bronicki, who later utilized the idea in conjunction with geothermal energy and went on to found Ormat Technologies, which has become a global leader in the geothermal industry.During the decades that followed, Tabor continued to dedicate himself to renewable energy research. In the 1970s, Tabor piloted the first model of a hybrid electric car engine, by employing a flywheel system – a mechanical device that stores rotational kinetic energy, as opposed to the batteries more commonly used in today’s hybrid and electric vehicles, which store and convert chemical energy into kinetic energy.Looking at Tabor’s lifelong accomplishments, Mor, who presented him with the Man of the Year award last month, recognized the researcher’s “great contribution to the development of renewable energy and energy efficiency,” in a conversation with the Post on Wednesday.“He was the technological leader who led Israel to enormous achievements in the field,” Mor said.While Tabor has received numerous accolades throughout his life, including medals from the Royal Society of Great Britain, and the Krupp Foundation Energy Award, one of his other most recent prestigious prizes was a Presidential Medal of Distinction. Former president Shimon Peres presented Tabor and seven other Israelis with the award in January 2014.On Tuesday night, Peres took to Facebook to publicly eulogize the great researcher and inventor.“Two years ago, Dr. Zvi Tabor was awarded the Presidential Medal for being a symbol of Israeli innovation – for inventing the modern dude shemesh and for inspiring generations of scientists and entrepreneurs in the field of solar energy in general,” the former president wrote. “This evening Dr. Zvi Tabor passed from this world, and I would like to send my condolences to the family – his memory will be a blessing.”Tabor is survived by his wife, Vivienne, his daughter Dahlia Alexander and grandchildren Reut Pintz-Yaron, Amit Pintz, Jonathan Alexander, Stav Alexander and Alon Alexander.Ehud Zion Waldoks and Greer Fay Cashman contributed to this report