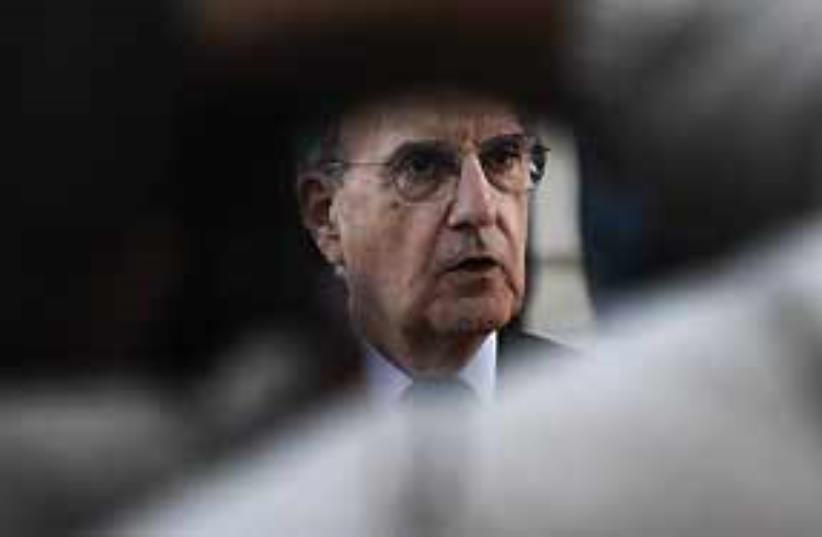 mitchell311
(photo credit: AP)
Advertisement
US Middle East envoy George Mitchell arrived on Monday evening for two days of talks with Israeli and Palestinian leaders, even as Palestinian Authority President Mahmoud Abbas was coming under increased pressure from Palestinians to refuse to enter direct talks with Israel.Mitchell, whose arrival was not announced until nearly the last minute, was scheduled to meet with Prime Minister Binyamin Netanyahu on Tuesday. He is then expected to meet with Abbas afterward, and to leave the region on Wednesday.RELATED:
Opinion: Reality Check -  Not so fast
PA denies giving up on conditionsBoth Israeli and US diplomatic officials have been saying for days that Mitchell was delaying his visit until there was something to talk about.His arrival on Monday, however, was not being interpreted by those same officials as an indication that Abbas had finally decided to agree to the launching of direct talks.“I don’t feel comfortable” saying that his arrival indicates a breakthrough, one Israeli official said. “It might be possible that they will get something out of Abbas, but I wouldn’t hold your breath.”Abbas has come under a great deal of pressure from the US, as well as from Arab countries such as Egypt, Jordan and now even Saudi Arabia, to renew direct talks – but so far, he has not budged.Diplomatic sources said that if the circumstances warranted it, Mitchell could, during his current visit to the region, travel to Egypt and Saudi Arabia to discuss the matter.Meanwhile, representatives of dozens of Palestinian factions and organizations on Monday warned Abbas against succumbing to pressure to open direct talks unconditionally.They claimed that Israel was planning to exploit the negotiations “to cover up for its practices, including the Judaization of Jerusalem, continued settlement construction and the completion of the racist separation fence.”They also warned that entering direct talks under the conditions set by the US administration would “save Israel from the international campaign of boycott and condemnation.”'No direct talks without agreement on the terms of reference'In a statement issued in the West Bank, the representatives, who included Fatah members, said, “We refuse to enter direct talks without agreement on the terms of reference, a timetable and a mechanism for implementing [an agreement]. We also demand an active international role and US assurances, as well as an Israeli commitment to abide by international law and United Nations resolutions.”Qais Abdel Karim, a senior official with the Democratic Front for the Liberation of Palestine, said that beginning direct talks before agreement on the terms of reference and a settlement freeze would be regarded as surrender to Israeli conditions.Abbas was quoted on Monday as saying that the Palestinians wanted to know the borders of their future state before entering direct talks.The Palestinians want Israel to recognize the June 4, 1967, lines as the borders of a Palestinian state as a condition for entering direct talks.They are also seeking US assurances that Israel would halt construction in all settlements, as well as in Jewish neighborhoods in east Jerusalem.Abbas reiterated his readiness to launch direct negotiations with Israel once there was agreement on the terms of reference and the basis of the talks.“We want to know the borders where we’re going to build our state,” he said.Netanyahu, however, has said he would not agree to preconditions to negotiations that would, in effect, determine their outcome before they started. He has also ruled out a continuation of the settlement freeze as a way to lure Abbas back to the table.
Advertisement
Subscribe for our daily newsletter