US: No breakthrough expected soon

Peres tells Mitchell that Israel is seriously committed to peace.

By JPOST.COM STAFF
APRIL 23, 2010 10:49
Netanyahu Mitchell 311
(photo credit: GPO)
Advertisement
An American official has played down the prospects of any immediate progress in US envoy George Mitchell’s efforts to resume peace talks between Israelis and Palestinians."Are we expecting a breakthrough this visit? Probably not," State Department spokesman Philip Crowley said Friday.President Shimon Peres assured Mitchell on Friday that Israel was committed to peace. Peres told Mitchell that whoever doubted Israel seriousness about achieving peace was making an error in judgment. The president said that the Israelis, Palestinians and Americans are standing before a “green light” regarding the peace process.Peres added that Mitchell’s arrival in Israel was “essential” and that the Israeli government would like to see him succeed on his mission.Earlier Friday, amid high hopes regarding the start of "proximity" Middle East peace negotiations, Mitchell reaffirmed the unshakable bond between Washington and Jerusalem during a meeting with Prime Minister Binyamin Netanyahu, saying the special ties would only get stronger.Mitchell stressed that the Obama administration was working to advance mutual Israeli and US interests, which he said were led by a comprehensive peace agreement between Israel and the Palestinians based on the two-state solution, Israel Radio reported.At the conclusion of the talks at the Prime Minister’s Office in Jerusalem, the two agreed to meet again on Sunday.Mitchell and Defense Minister Ehud Barak, meanwhile, agreed to meet again in Washington next week after their hour-long talks at the Defense Ministry in Tel Aviv on Friday morning. Mitchell is hoping to announce the start of the indirect talks during his current three-day visit here.The US envoy is expected to head to Ramallah in the evening for talks with Palestinian Authority President Mahmoud Abbas. Anticipation of a breakthrough was high on Thursday night, despite Netanyahu’s reiterated refusal to halt construction in Jewish neighborhoods of east Jerusalem as the Palestinian Authority has been demanding. RelatedAnalysis: Giving ground on Arab east Jerusalem?

Barak heading to US next week 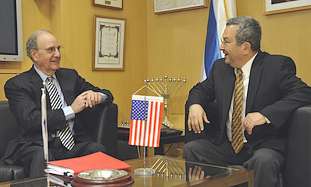 Meanwhile, Barak’s office announced that the defense minister would fly to the US on Sunday for meetings with heads of the Obama administration.