By ABE SELIG, HERB KEINON, KHALED ABU TOAMEH
MARCH 10, 2010 03:26
ramat shlomo construction east jerusalem 311
(photo credit: AP)
Advertisement
The decision by an Interior Ministry committee to announce approval of plans for some 1,600 housing units in northeast Jerusalem’s Ramat Shlomo neighborhood cast a pall Tuesday night over the visit of US Vice President Joe Biden, who squarely condemned the move.Soon after having dinner with Prime Minister Binyamin Netanyahu, who said that neither he nor Interior Minister Eli Yishai had known that the plans would come up for approval on Tuesday, Biden issued a statement saying, “The substance and timing of the announcement, particularly with the launching of proximity talks, is precisely the kind of step that undermines the trust we need right now and runs counter to the constructive discussions that I’ve had here in Israel.”Biden said that what was needed now was to build “an atmosphere to support negotiation, not complicate them.”“The United States recognizes that Jerusalem is a deeply important issue for Israelis and Palestinians and for Jews, Muslims and Christians,” the statement read. “We believe that through good faith negotiations, the parties can mutually agree on an outcome that realizes the aspirations of both parties for Jerusalem and safeguards its status for people around the world. Unilateral action taken by either party cannot prejudge the outcome of negotiations on permanent-status issues.”Related:
Analysis: Veep shows Israel some love

The government’s 10-month moratorium on housing starts in the settlements does not apply to Jerusalem.The Palestinian Authority slammed the government’s approval of the new housing units in Ramat Shlomo, saying the move threatened to derail peace negotiations a day after US Middle East envoy George Mitchell had announced their resumption.The plan calls for the southern and eastern expansion of Ramat Shlomo, a predominately haredi enclave that borders the Arab Shuafat neighborhood, and includes the upgrade of a road that leads into the neighborhood.“It’s obvious that the Israeli government wants neither negotiations nor peace,” said Nabil Abu Rudaineh, a spokesman for PA President Mahmoud Abbas.Condemning the ministry’s decision as “provocative,” Abu Rudaineh urged the US administration to “respond with effective measures.” Without real and effective pressure from the US on Israel, the peace process would be suspended, he said.“We need an American position that would oblige Israel to stop these provocations and actions that destroy the peace process,” the spokesman added.Abbas phoned Arab League Secretary-General Amr Moussa and discussed with him the latest Israeli decision and its impact on US efforts to relaunch the peace talks.A source close to Abbas said the PA president was “furious” about the decision and warned that it would undermine his status.“The president has come under attack for agreeing to resume the talks with Israel, and now this decision is like spitting in the face of those who support the peace process,” the source said. “The timing of the [Interior Ministry’s] announcement could not have been coincidental.” The source said Abbas had asked Moussa to hold urgent consultations with all members of the Arab League to reconsider their backing for the resumption of the peace talks. The Arab League last week expressed support for US efforts to resume indirect proximity talks between the Palestinians and Israel.PA negotiator Saeb Erekat said the planned construction was destroying trust needed to go forward with the new round of indirect peace talks that the two sides agreed this week would take place under Mitchell’s mediation.“With such an announcement, how can you build trust?” Erekat asked. “This is destroying our efforts to work with Mr. Mitchell.”He added, “It’s a really disastrous situation. I hope that this will bean eye-opener for all in the international community about the need tohave the Israeli government stop such futile exercises.”Meanwhile, top White House spokesman Robert Gibbs said the UnitedStates condemned the Israeli decision, telling reporters that PresidentBarack Obama’s position on the settlements was known by both theIsraelis and the Palestinians.The announcement came during Biden’s visit to the country, although anInterior 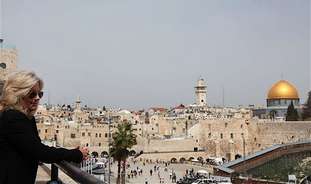 Ministry spokeswoman stressed on Tuesday night that the timingof the decision was coincidental.“There’s no connection,” the spokeswoman said regarding Biden’s visit.“This is a plan that has been drawn out and discussed for over threeyears, and it’s a process that will continue for a long time to come.”The spokeswoman added that the public now had 60 days to file anyformal objections to the Ramat Shlomo plan, which could stall thebeginning of construction.A spokesman in the Prime Minister’s Office said on Tuesday night thatonly that afternoon –  following his first meeting of the day withBiden – had Netanyahu received word of the Interior Ministry’sapproval. The two men and their wives also met in the evening fordinner.The spokesman said the Palestinians should understand that this was thepreliminary part of a long-term planning process, and that the homeswere meant for an existing Jewish neighborhood in the city. As to thePalestinian threat to scuttle the proximity talks as a result of thismove, the spokesman said that if the PA wanted to halt thenegotiations, it could always find an excuse.Just a few hours before the Interior Ministry’s announcement, Biden –in a public statement following a two-hour meeting with Netanyahu –praised the prime minister for steps he had taken to create a moreconducive atmosphere for talks with the Palestinians.“Over the last year,” Biden said to Netanyahu, “you have takensignificant steps, including the moratorium that has limited newsettlement construction activity. And you have significantly increasedfreedom of movement across the West Bank.”Saying that the Palestinian leadership was “beginning to make progress”on reforming its government institutions and making its security forcesmore reliable, Biden said it was “easy to point fingers, particularlyin this part of the world, at what each side has not done.”But, he said, “it’s also important to give credit where things havebeen done in order to be able to move forward. Mr. Prime Minister, theUnited States will always stand with those who take risks for peace.And you’re prepared to do that. And I am hopeful. And I’ll be havingdiscussions with Palestinian leaders. It is my hope and expectationthat they will be prepared, as well.”In an obvious effort to alleviate Israeli concerns about this USadministration’s commitment to Israel, Biden said, “Bibi, you heard mesay before, progress occurs in the Middle East when everyone knowsthere is simply no space between the United States and Israel. There isno space between the United States and Israel when it comes to Israel’ssecurity.”
Biden said the proximity talks were just “a start. They’re not designedto finish the process.” He said the indirect talks “must lead” tonegotiation and direct talks between the parties.“The goal is, obviously, to resolve the final-status issues and toachieve a two-state solution with Israel and Palestine livingside-by-side in peace and security,” he said. “Historic peace is goingto require both parties to make some historically bold commitments. Youhave done it before, and I’m confident for real peace you would do itagain.”Before meeting with President Shimon Peres, Biden said he viewed theproximity talks as a vehicle to “allay” the layers of mistrust thathave built up between the two sides over the past few years.Jerusalem Post staff and AP contributed to this report.
Advertisement
Subscribe for our daily newsletter